TRVE Brewing
Beer and pot have always made for a passionate love story. So similar. So different. But with an undeniable attraction — one that blossoms in the spring every year around April 20.

Still, since marijuana remains illegal on a national level, breweries — save for a few — have been hesitant over the years to embrace it in their branding, names or logos since they are beholden to a federal agency for their liquor licenses. But as attitudes and expectations shift, more are testing the water by brewing up beers that are explicitly connected to cannabis — and often boast similar dank aromas.

Here's a rundown of this year's bumper crop of 4/20-themed brews, all of which will be released on April 20. (P.S.: None of these beers have any form of THC, or even CBD, in them.)

Nazareth Double IPA is perhaps the king of the 4/20 beers in Denver, as TRVE Brewing has been making it since 2013, when it dedicated its first batch to "Dopesmoker," a song by the metal band Sleep. Double-dry-hopped with multiple hop varieties (Idaho 7, Meridian, Azacca and Citra), Nazareth is one of TRVE's highest-alcohol beers, typically coming in between 8 and 10 percent ABV. This time around, in honor of "the highest of high holidays," TRVE says it will also have Nazareth-branded koozies and rolling papers for sale on release day. It will be on tap and in cans starting at 4:20 p.m.

Spice Trade Brewing in Greenwood Village will release a brand-new IPA called Colorado Chronic, which was brewed with hop terpenes and a blend of the dankest hops that the brewery could find. According to the brewery, "This sticky icky IPA comes in at 42.0 IBUs and has big notes of cannabis, tropical fruit and pine thanks to a blend of Strata, African Queen, Evergreen and Simcoe hops," along with a concentrated dose of hop terpenes.
⁠ 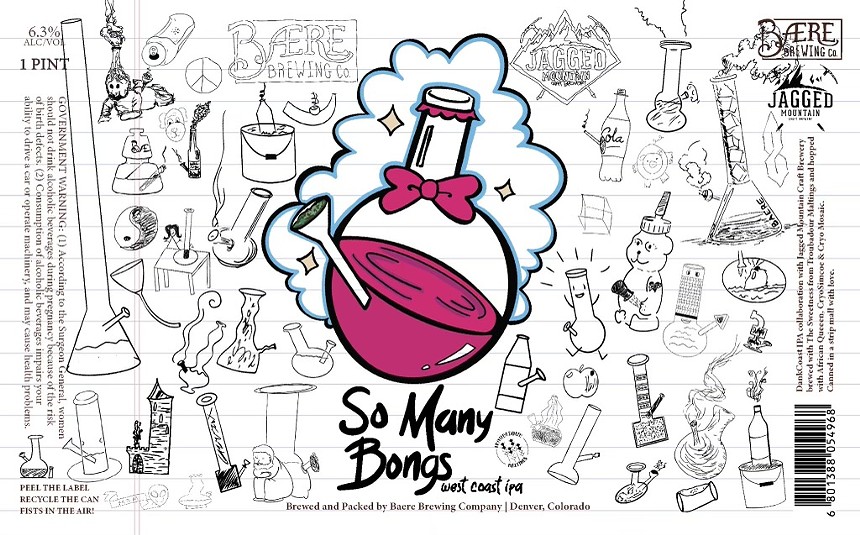 Jagged Mountain Craft Brewery
Jagged Mountain Craft Brewery and Baere are throwing caution to the smoke-filled winds with an unusual label for their new collaboration, So Many Bongs. This 6.6 percent ABV West Coast-style IPA was brewed at Baere with malt from Troubadour Maltings and hopped with African Queen, CryoSimcoe and CryoMosaic. The mesmerizing artwork was created "by digitizing doodles of bongs that customers at both Baere and Jagged Mountain drew over the course of a couple weeks," the breweries say. It will be on draft and available in cans to go at both taprooms.

In addition to its collab with Jagged Mountain, Baere Brewing is releasing two other beers on draft and in cans: Dankjewel, a 7.3 percent ABV hazy IPA hopped with Mosaic, Columbus and Nelson Sauvin; and Proceed to Memory, a 7.2 percent ABV West Coast-style IPA brewed with malt from Troubadour Maltings and hopped with Strata, Citra, Centennial and Mosaic. Baere will also be selling some Girl Scout cookies on April 20 and will have its beer slushie machine filled with tangy creamsicle slushies. 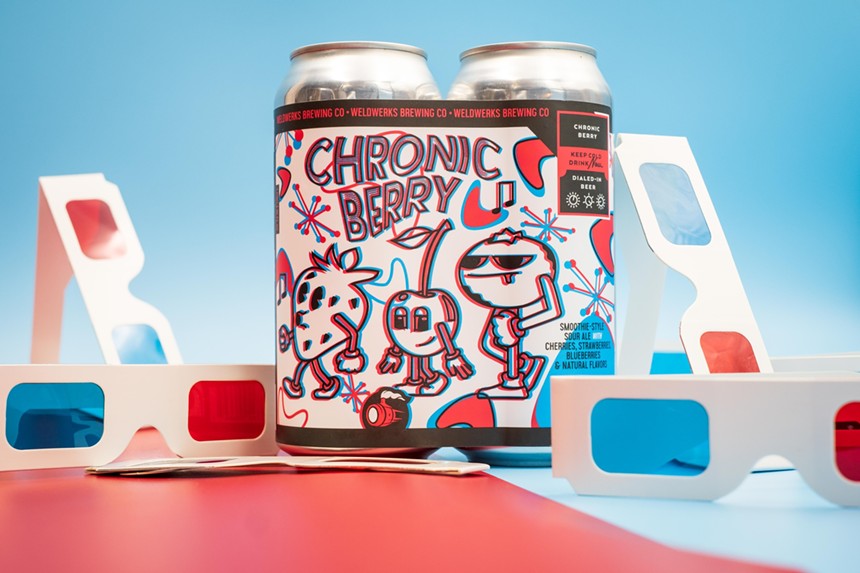 WeldWerks Brewing
WeldWerks Brewing is bringing back its dankest 4/20 creation from 2021, Twisting Bines IPA, and adding a new one for 2022. Twisting Bines is a 6.8 percent West Coast-style India Pale Ale brewed with Citra, Cascade, Simcoe and "Citiva and Sticky fingers hops," the brewery says. The name "comes from the idea that both cannabis and hops come from the same family, and bines are used to grow hops. The 'Twisting' part of the name comes from twisting up a doobie of cannabis." Chronic Beery, meanwhile, is a 5.2 percent ABV smoothie-style sour brewed with cherries, strawberries and blueberries. "To put it bluntly...this beer contains a ton of fruit. In fact, the most fruit we've ever added to a beer outside of our Froot Camp series," WeldWerks says. "Chronic Berry was created to cure cottonmouth and to help all who participate, to celebrate one of the best unofficial holidays that happens to go down every April 20."

Wiley Roots Brewing is bringing Thomas the Dank Engine Double IPA out of the station for 4/20 and offering pairings with four different beers and four munchies: Hot Cheetos, Smart Pop White Popcorn, mini powdered doughnuts and Rice Krispie Treats. Thomas the Dank Engine is made with Citra, Simcoe and Centennial hops. It weighs in at 9 percent ABV and is available on draft and in cans to go.

Oskar Blues Brewery has always been Colorado's most pot-centered brewery, and this year will be no exception as the Longmont taproom hosts a 4/20 Shakedown and releases Veritasty Legalized IPA, a beer it brewed in collaboration with Veritas Cannabis. From 4 to 9 p.m., you'll find "a heady lineup of music, great beer flowin' just steps from where it's made, cool vendors in the pop-up market, live-painting artists, and all the delicious food your heart and stomach can dream of," the brewery says. There will also be live music from the Steely Dead Jam Trio, featuring members of Break Science, Pretty Lights and Bttrfly Quintet.