BenDeLaCreme on the Meaning of Marriage

Magnus Hastings
BenDeLaCreme's latest one-woman show is an exploration of love, marriage, and commitment.
"Terminally delightful" drag queen BenDeLaCreme (born Benjamin Putnam) recently embarked on her biggest solo tour ever with her new one-woman show, BenDeLaCreme Is...Ready to Be Committed. The production comes to Summit on Wednesday, May 18, so grab your tickets now before they sell out.

BenDeLaCreme, or DeLa for short, has been doing drag since 2002, originally performing as the "token queen" of the Chicago Kings before becoming a fixture in the Seattle drag scene. The forty-year-old queen gained international recognition during her two stints on the Emmy award-winning series RuPaul's Drag Race. She first appeared on season six, where she was crowned "Miss Congeniality," and then on All Stars season three, where she set the challenge win record before dramatically eliminating herself from the competition. Since then, DeLa has had four critically acclaimed solo shows off Broadway, taught at Seattle's Academy of Burlesque and started her own production company, BenDeLaCreme Presents, which has produced multiple international tours in addition to a Hulu Christmas special.

DeLa originally began touring Ready to Be Committed in 2020, but only managed to get through a few stops before COVID shut the production down. While writing the script in 2019, she was contemplating her relationship with her long-term partner, and what commitment looked like for them as a queer couple. Her musings morphed into the show's subject matter.

"My partner and I have been together seven years now, and we do everything together. We're partners in our life and in our business; he runs my production company with me," DeLa explains. "Our lives obviously have become more and more intertwined, and as that's happened, it's been interesting exploring what that's brought up for me."

Using a mixture of burlesque, comedy and original songs, Ready to Be Committed follows DeLa on her fictional journey to the altar. Given the history of marriage inequality in the LGBTQ+ community, DeLa felt compelled to explore the topic of weddings and wedding planning from a queer perspective.

"As a small queer kid, I of course indulged in the same sort of fairytale princess fantasies that many do of your special day, with your big gown and whatever," she reflects. "At the same time, I was told I couldn't really be a part of that — that it wasn't for me. That creates a lot of complicated feelings about commitment and what it means. I was thinking about all of that as we moved forward and started this." 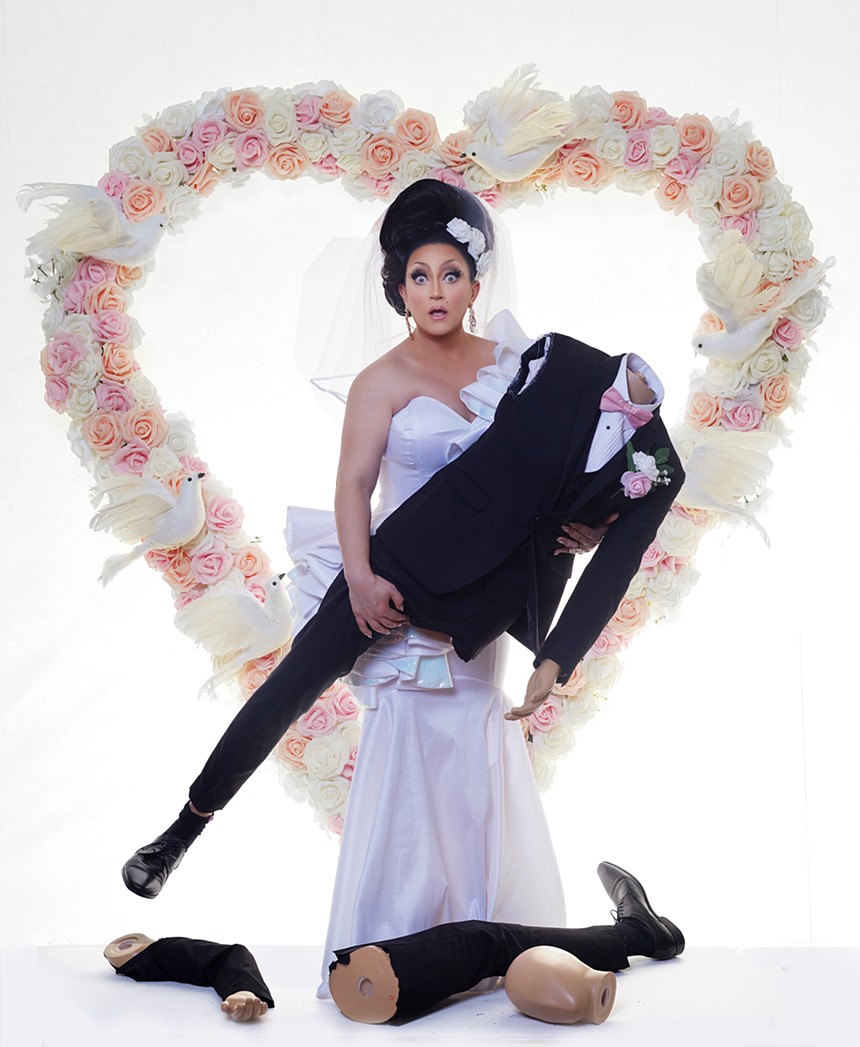 Ready to Be Committed follows DeLa's wedding journey, starting with finding a husband.
Magnus Hastings
Although DeLa wrote this production several years ago, the topics of companionship and commitment have remained timeless, and perhaps have become even more relevant after quarantine. "A lot of stuff that felt like it made sense pre-pandemic feels like it maybe doesn't hold up now," DeLa says. "But looking at the material, this really all still feels pertinent and important, and in some ways even more so — because we've all just gone through so much of an ordeal, where we really had to spend a lot of time thinking about what it is to be alone and what it takes to be with other people."

Instead of reworking the script for Ready to Be Committed, DeLa used the unexpected time off to amplify some of the visual drama that happens on stage. "The extra time leading up to this tour has allowed me to rework a lot of the spectacle parts of it. So really upping the ante on some of the visual bang for your buck, though the actual content has really remained the same," she says. "There's interactive video, there's puppetry, there's all sorts of wild ways of creating multiple characters on stage."

DeLa, who will gleefully turn any object into an anthropomorphic puppet, says the most absurd puppet to appear in the production is, of course, a penis-shaped water bottle. "The most ridiculous puppet is a novelty penis water bottle that DeLa gets from a bachelorette party," she says. "It comes to life and is a very serious lesbian feminist who wants to talk about the misogynistic origins of marriage from the perspective of medieval times, when women were traded and exchanged for land."

A penis-shaped water bottle puppet espousing feminist theory is exactly the kind of wacky brilliance fans have come to expect from DeLa. But underneath all her excessive camp and comedy, there is always a startlingly poignant message in her performances. DeLa says the main takeaway from Ready to Be Committed is that people shouldn't feel obligated to follow the societal conventions they are taught since childhood to uphold.

"It's almost like it's our job as adults to unlearn all of this messaging we've been inundated with about what we're supposed to be. That's true in the world of love and relationships; it's true in our careers and everything else. We have to figure out how to approach things with open minds and open hearts, listen to ourselves and not be ruled by the words, instructions and thoughts of others," she explains. "So this show is really about that, and it's about DeLa shedding what she thinks is a given and figuring out what [marriage] can be for her."

Audiences can expect penis-shaped puppets and heartfelt social commentary in equal measure.
Magnus Hastings
DeLa was keenly aware that her audience would consist of people with all different relationship statuses, and wanted to appeal to as many of them as possible. "As I explored these themes, it became clear to me that I needed to speak to these ideas in a way that was for everybody. I felt very aware that there would be someone of every experience in the audience...and I wanted to make sure that the way I explored this subject matter was universal, in a way that everyone could feel seen," she says. "I don't want to give too much away, but I'm hoping that people leave with a sense of comfort and freedom."

Ready to Be Committed is one of the first chances DeLa has had to perform for a live audience since the pandemic began. She briefly toured last winter with fellow Drag Race alum and frequent collaborator Jinkx Monsoon for their annual Christmas show, but, facing rising cases of Omicron, they were unable to complete the full tour. Now, DeLa is thrilled to be fully back in her element.

"As much as I knew I was going to be excited to be back on stage, in front of audiences, it kind of blindsided me in terms of just how much I was like, 'Oh, right, this is how much I love this,'" she says of her first live shows post-shutdown. "As cliché as it sounds, it feels so much like my life's purpose. It's mind-blowing: Everything about life feels better when I'm able to do what I do in front of a live audience. I'm so excited that I get to spend four months on the road with this show, just connecting with people all over the globe."

But DeLa hesitates when asked if live theater is still her preferred performance medium. "I always would have said yes, emphatically and immediately, but one of the cool things to come out of the pandemic was being in a position to have to figure other stuff out. I produced and directed the Jinkx and DeLa Holiday Special, and that was so hard but such a rewarding experience," she says. "I'm so happy with what we created, and I really do enjoy working in the medium of film, especially as a writer-director. I'm very, very happy to be back in the world of live performance — and that's something I never want to let go of — but I have a new itch to continue in this world of creating for the screen." DeLa is thrilled to be back on stage, but also wants to continuing pursuing film and TV projects.
Magnus Hastings
As for the future of her own relationship, the real DeLa isn't looking to get married quite yet. In fact, after all her contemplations on marriage that the show unearthed, she's not sure if she even needs to marry her partner.

"We are discussing it and looking at it down the line, but it's something that we realized is just not necessarily something we need to define our relationship. We are committed to each other, and we built this life together, and I'm not sure where it will take us, but in the meantime we're producing live stage work, films and tours. That keeps us pretty occupied with almost constant celebration," she says.

Plus, she's had more than her fair share of wedding planning just putting this production together. "It was an awful lot of thinking about dresses and cake," she says, "without an actual wedding taking place."