Cannabis breeders have been referencing Jedi, the dark side and plenty of characters in between for some time now. If you really want to go to a galaxy far, far away during your Star Wars marathon, check local dispensaries for these ten strains:

Skywalker OG
Skywalker OG has been putting users to sleep for over a decade. Heavy on Kush aspects with the potency to match, this is probably the most popular of the Star Wars strains. It's almost guaranteed to glue you to the couch, but your eyes don't stay open for much longer. If you're planning on running through the trilogy in one day, save this one for the end credits.

Death Star
Skywalker OG is fine for the clean-cut hero, but consider Death Star when you feel like rooting for the bad guy. It’s a tasty pathway to relaxation for anyone who appreciates a rubbery Diesel, but listen to Admiral Ackbar's warning if you're used to a Sour D energy rush, because this one is a trap. After a couple of hours of enthusiastic gabbing and munchies, Death Star stealthily relaxes my body until I pass out with the TV on.

Bubba Fett
A chip off the Bubba Kush block named after our favorite intergalactic bounty hunter (well, maybe our second favorite now, thanks to Disney+), Bubba Fett was born in Boulder’s Green Dream Cannabis cultivation. The sleepy hybrid bears Pre-’98 Bubba Kush and Stardawg genetics, and is not to be confused with less popular strains such as Boba Fett or Bubba Fett OG. Even at night, this strain can be easily overdone, with the motivation to brush your teeth, take the dog out or put leftovers in the fridge all hanging in the balance after a puff or two. Be sure to have your pre-sleep chores done before lighting up, or you’ll wake up in a shameful, slovenly state.

Princess Leia
This mix of Cinderella 99 and Venkman has become a mainstay at Colorado-based dispensary chain Terrapin Care Station. Like Cindy 99, this princess can get a little spacey, but the high still brings a solid combination of energy and stress relief. Princess Leia's flavor is also a hit, carrying a funky, sharp mix of cheese and sweet lemons. 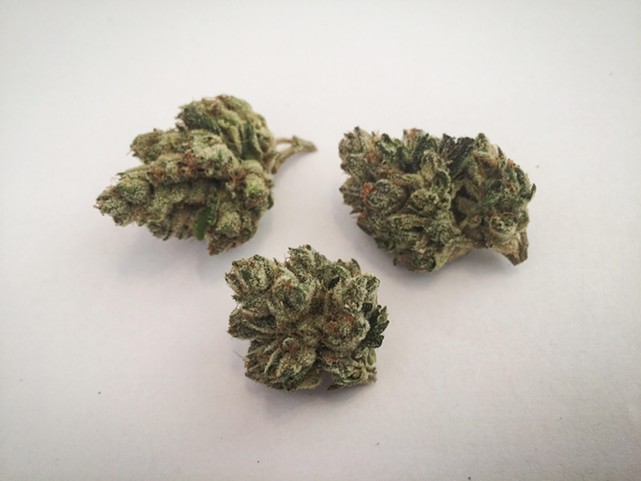 Don't forget what happened to Alderaan. Death Star will end you.
Herbert Fuego
Han Solo Burger
Han Solo Burger has been successfully flying under the radar as other strains come and go, but that's what a good interstellar smuggler does. A consistent find at Denver pot shops for about three years now, this hybrid of GMO and Larry OG typically ranges from relaxing to debilitating, so check your tolerance before going all in. Not everyone loves Han Solo Burger's savory, zesty and dank flavor profile, but as gas and garlic flavors become more sought-after thanks to GMO's popularity, the strain's place in history is looking even stronger.

Jedi Kush
Another Star Wars strain lacking in notoriety but not dispensary presence, Jedi Kush (also known as Jedi OG) is a good choice for the beginning of a movie marathon. Despite having Death Star and San Fernando Valley OG Kush as parents, Jedi Kush keeps users on the light side for most of the high. The munchies are no joke, either, but the body and mind stays energetic enough for a few hours without making the mind spin.

Jabba OG
This cross of Bubba Kush and Skywalker OG can be purchased at the Clinic, which also sells Jabba OG seeds from time to time. Everything about the lineage says sleepytime, and that's exactly what the high provides, along with a sweet, gassy flavor profile.

Vader OG
Like the real Darth Vader, Vader OG was not simply born and bred. It was spawned over time, thanks to a detailed master plan from the resin lords at Ocean Grown Seeds. A chosen phenotype of a cross between San Fernando OG Kush and Larry OG, Vader OG has a dank, tobacco-like flavor profile for grownups. The strain's relaxing effects line up with the majority of other Star Wars strains, but Vader OG is a little easier to find in Denver.

Yoda OG
Yoda OG competes with a different strain named Master Yoda, but both of them are descendants of OG Kush and carry similar characteristics. If you want to amp up the visuals without passing out, start slow with Yoda, which carries a euphoric, energetic high when consumed in small doses. Low-tolerance users beware, though: This comedown is strong in the force after lunch.

Ewok
Also known as Alien Walker, Ewok is more common in the breeding room than a dispensary. The strain's penchant for high yields and strong trichome production in a short time have ensured Ewok's status as a stud, so it's harder to find at pot shops than it was ten years ago.