YouTube
Lauren Boebert: never written a report she fully understands.
On April 27, Department of Homeland Security Secretary Alejandro Mayorkas announced the formation of the Disinformation Governance Board. It's intended to directly address the prevalence of "malicious internet activity" that could interfere with the U.S. political process, and "protect free speech, privacy, civil rights and civil liberties of all Americans," according to a DHS official.

But even Politico has labeled the move "messy," and the GOP has pounced on the opportunity to make a red-meat mountain out of a committee-level molehill. Ironically — if not surprisingly — the far right is using disinformation tactics to undermine a governmental policy group meant to battle disinformation. And leading the charge in the House is Colorado's own Lauren Boebert.

Boebert joined Arkansas Senator and He-Who-Walks-Behind-the-Rows preacher Tom Cotton in presenting companion pieces of legislation that would abort the nascent Disinformation Governance Board by defunding it. "The Department of Homeland Security should not be in the business of censoring free speech on Twitter and Facebook," said Boebert in a statement released on her website. Which is a great example of the disinformation facing America today: making a case that does not exist to people who don't know it doesn't exist, and in that manner bringing it to life, if only in the ghostly half-life of people who don't know any better. There's a reason why, back in 2016, Trump said, "I love the uneducated." Because he and his disciples depend on the disinformation that motivates them.

Republicans like Boebert who have suddenly jumped on the anti-censorship train are doing so in order to redefine terminology in America. When the far right talks about censoring the history of American racism, that’s “parents’ rights.” When it talks about gender equality, that’s “de-sexualizing education for our children.” When it talks about opposition to vaccine mandates, it’s all about “bodily sovereignty” — but if the subject changes to reproductive rights, the conversation switches to the sanctity of life.

So Boebert and Cotton opposing any attempt to quash disinformation makes sense. They’re taking it personally because, well, it’s personal for them. Disinformation is the language they both speak. It’s their central legislative strategy.

What evidence is there for this? Here in Colorado, we know Boebert’s record all too well. And we’d do well to remember her own disinformation — and her fight to preserve her right to share it — come November. Here are just some examples:

Boebert's Origin Story
Back when Boebert was still just a no-name owner of a failing diner in Rifle married to a sex offender, she talked herself up in terms of her backstory. There were minor hitches in the tales about her upbringing, but the main lie had to do with the origin story of how everyone at Shooters Grill came to carry firearms. Supposedly, that began after someone was beaten to death outside the restaurant in 2013. Boebert has offered this explanation several times, including on the House floor on March 10, 2021. “When I became a business owner, I needed to protect myself,” she said with the dramatic flourish of a middle-school production of Othello. “There was an altercation outside of my restaurant where a man was physically beat to death. There were no weapons involved. He was beat to death by another man’s hands.” But that just isn’t true. First, the incident wasn’t “outside her restaurant”; it happened three blocks away. More important, the man who died wasn’t “physically beat to death.” He died of a meth overdose, and the death was ruled accidental. But that doesn’t play well to the cameras when you're talking about a heavily armed brunch waitstaff.

QAnon
To her credit, Boebert realized early in the 2020 election that being a follower of QAnon was something of a double-edged sword in far-right politics. On the one hand, it brought an influx of the poorly informed, excited to be lied to in order to validate their irrational hatred of progressive politics, which is to say “anything done since the ’50s.” So she denied following Q, but statements like "Everything that I've heard of Q, I hope that this is real” belie that claim. So does her online record: Boebert's YouTube account  subscribed to several QAnon channels before being scrubbed in the increased scrutiny of the campaign. In the meantime, Boebert has spread several conspiracy theories that originated with Q, including the ironic charge that Democrats are the ones “obsessed with conspiracy theories.”

Twitter
The Big Lie
Perhaps Boebert’s biggest piece of disinformation is the one she’s taken like foul orange communion from Trump himself: that the 2020 election was stolen. “There is no way that anyone can call the 2020 presidential election fair,” she tweeted. “We have to make this right.” She continued to claim everything from “voting irregularities” to outright fraud, depending on her audience, and still does to this day, despite all evidence to the contrary. Here's how historian Timothy Snyder, author of the book On Tyranny, explained the power and threat of the Big Lie to CNN in the wake of the January 6 insurrection: “It's a big lie because you have to disbelieve all kinds of evidence to believe in it. It's a big lie because you have to believe in a huge conspiracy in order to believe it. And it's a big lie because, if you believe it, it demands you take radical action.”

“Today is 1776”
Speaking of the January 6 insurrection, Boebert’s actions on that day have largely been bypassed — so far— because of more obvious and egregious offenses. But Colorado — and probably the Justice Department— needs to take a second look at her most famous tweet from that morning in context with what we’ve come to find out about the seditionists and their plans for the day, and that included the term “1776.” This comes from no less a source than “Stop the Steal” organizer Ali Alexander, whose recent cooperation with federal investigators must have Boebert and company nervous. Alexander had been tweeting for weeks using “1776” as a term for violent uprising; in one, he talked about how “he and hundreds of thousands of other protesters would ‘1776’ the Capitol. And the night of January 5, he said that “1776 is always an option. These degenerates in the deep state are going to give us what we want, or we are going to shut this country down.” In that context, one of which Boebert was clearly aware given her presence at the same rallies, her tweet isn’t just disinformation; it’s evidence of sedition.

Bused-In Black Lives Matter Supporters
This is just one example of the little subversive lies that act as sappers under the wall of American political reality — too small, most days, to really make the news, but effective enough to bolster the beliefs of the gullible, the talk-radio right that just wants to be led, to be fed sound bytes sufficient to bloviate at the dinner table but not to truly understand any issue. In July 2020, when BLM rallies were everywhere, even in Rifle, Boebert claimed in a KOA interview that BLM protesters were paid for and bused in, despite there being absolutely no basis in fact for such a claim. But it's the sort of specious allegation that's become such a standard in the far-right GOP, popularized by Trump himself, who'd often preface a lie he was about to tell by placing any responsibility for the claim on undefined others. "Some have said," "People are telling me" and "I just heard that" are all tells. Tells that define whatever follows those statements as absolutely false, and designed to mislead and manipulate.

Her Husband
Granted, lots of spouses might lie to themselves about how not-awful their spouses are. But not in public, and not in a way that violates campaign finance law. Lauren lying for husband Jayson probably started even before they got married, when she chose to defend his indecent exposure to teenage girls at a bowling alley. But that was just dipping her toe into the polluted pool that is defending the indefensible. Last year, it came out that Boebert had failed to disclose her husband’s nearly $1 million paycheck from “energy consulting” — this at the same time that Boebert herself was sitting on the House Natural Resources Committee, where she’d introduced a bill that sought to prevent the president from issuing moratoriums on oil and gas leasing. To that clear and disturbing conflict of interest, she simply entered “N/A” on her campaign finance disclosures form. But it’s “A,” Congresswoman. It’s definitely fucking “A.”

Giving Birth in a Truck Because of a Busy Schedule
It’s a small and extremely weird lie, given the others on this list, but this sort of disinformation is of the more subtle kind, the sort that invites people to come into the house-of-cards world it wants to create, put their feet up, stay a while, try not to think about how none of it makes sense. Giving birth in a truck, of course, is possible, if not plausible, considering Boebert's record of accuracy. The lie we're talking about is why she gave birth in said truck: time management. She was lying to make an incomprehensible point against paid parental leave, which at that point still had not been killed by the casual inadequacies of Kirsten Sinema and Joe Manchin. “I delivered one of my children in the front seat of my truck,” she said in her YouTube show Bullet Points. (Get it? Gun violence is so funny.) “Because as a mom of four, we got things to do. Ain’t nobody got time for two and a half months of maternity leave. We have a world to save here.” How exactly that supports her argument was unclear, but the message to her supporters was crystal. She was tough! She was no-nonsense! And, of course, she was making shit up.

The Elevator Story and to Whom It Panders
"So the other night on the House floor was not my first 'jihad squad' moment," Boebert told a crowd of fawning fans in November 2021, thinking it was a private function. "I was getting into an elevator with one of my staffers...and I see a Capitol Police officer running hurriedly to the elevator. I see fret all over his face. I look to my left, and there she is, Ilhan Omar, and I said, 'Well, she doesn't have a backpack, we should be fine.'" While most of the country filed this bullshit under "Things That Didn't Really Happen," the purpose of that story to that crowd was clear: It was race-baiting to please a room full of race-baiters. A false story about false power for a group clinging to even the facade of bullying strength as they see their own in full wane. 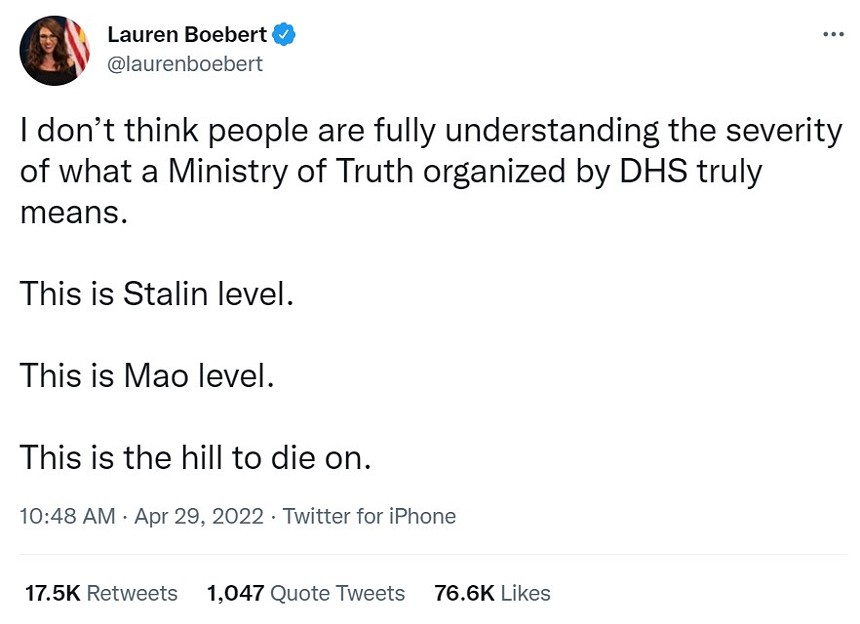 Twitter
The Deep Understanding of Stalin, Mao and George Orwell
Aside from the deep discomfort we should all feel as Coloradans knowing that there's any support out there for Boebert and the self-aggrandizing ridiculousness she calls public service — someone no one should trust to define hills and whether or not we should die on them — is there anyone who read this tweet and actually thought Boebert understands Stalinist or Maoist policy? Or even knows that the Ministry of Truth is from 1984 and not Harry Potter? This is your representative, CD3. At least for the next eight months.