Fore! What's Next for the Park Hill Golf Course Property?

Six months after Denver residents voted on two ballot measures regarding the defunct Park Hill Golf Course, they can now see what development there might look like if they vote to lift a conservation easement on the property.

"I think it’s really important for the community to see how everything fits together," says David Gaspers, a principal city planner for the City of Denver.

On May 10, members of the Park Hill Golf Course Area Plan steering committee were shown a mock-up of a potential small-area plan, which could guide the city on what type of rezoning might be needed for the site. It showed a mixed-use development on the property along the west side, as well as a retail corridor running along Colorado Boulevard from the south for a few blocks and then jutting inward. There would be residential units throughout this development, with the tallest section — twelve stories — along Colorado Boulevard and East 40th Avenue.

The map also included a regional park on the 155-acre property, which Westside Investment Partners purchased from the Clayton Trust in 2019 for $24 million, the year after the golf course closed. The park would be between 75 and 80 acres, and in the far northeast corner of the property, a 25-acre stormwater detention area could be used as another open-space element, as long as no permanent habitable structures are located in that area.

Although by no means a final version, this mock-up devised by a contractor hired by the city could help the Department of Community Planning and Development put together what will ultimately evolve into an official small-area plan this summer, one that would be subject to public review and then votes by the Denver Planning Board and Denver City Council. Before any development could actually begin, however, Denver City Council would need to refer a measure to the ballot asking voters to decide whether to lift the existing conservation easement. 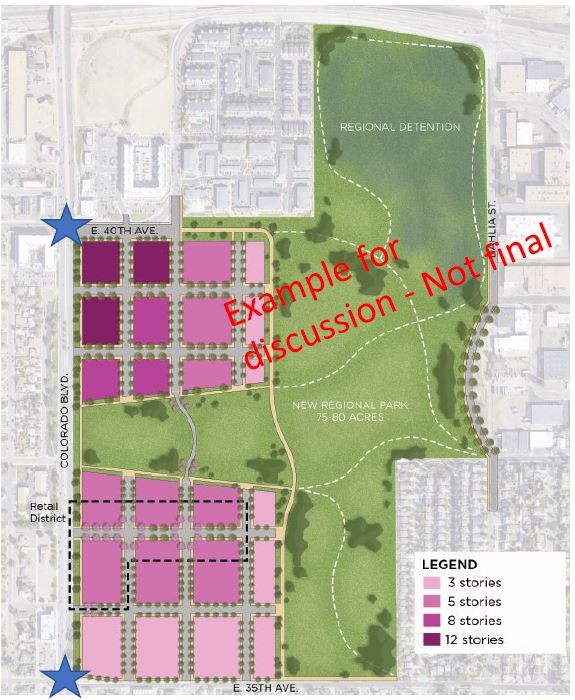 A development idea for the Park Hill Golf Course is starting to take shape.
Denver Community Planning and Development
Westside's initial plan called for sixty acres of open space. But Save Open Space Denver, which formed after Westside purchased the land and counts former state representative Penfield Tate and former Denver mayor Wellington Webb as members, wanted the entire property to be open space, and contended that the conservation easement would not need to be lifted in order to turn the land into a regional park. The Denver City Attorney's Office and Westside disagreed with that assertion, arguing that the easement allows only for a primary use of the property as a golf course. Both sides have agreed that any development on the property would require a lifting of the easement, which the Webb administration crafted back in 1997.

That sent Westside and the city back to the drawing board, working with the steering committee that CPD had formed in February 2021.

That feedback has come from city contractors knocking on doors and from community surveys, as well as from steering committee members who were appointed by the CPD after an open call for applicants, some of whom live nearby and others elsewhere in the greater Park Hill area.

"It’s important that what we see here is a focus on addressing that key issue of our housing crisis, as well as making sure that there are amenities for residents," adds Ho. "I think it’s exciting that they’re talking about nearly two-thirds of the land that is park and open space."

"Basically, the tradeoff is, the more green space you have, the taller the buildings are going to be. So the more green space you have, you may end up with twelve-story buildings, which will block all of the views of the overlook and all of those apartment complexes around there, people who bought their homes and bought their condos for the views. It’s horrible; it’s absolutely horrible what they’re proposing," counters Shanta Harrison, who represents Greater Park Hill Community Incorporated on the steering community. Harrison is also a member of Save Open Space Denver.

"I would love to see it as a regional park, with the clubhouse being active in the way that it has always been, available to the community for events. ... The clubhouse has actually been essential to the Northeast Park Hill community, because it has given people a place to host events who otherwise would not be able to afford a formal facility like that," adds Harrison, who lives near MLK Jr. Boulevard and Glencoe Street. She says that she's heard great ideas about adding community gardens and even swimming pools to the concept of a regional park facility.

Harrison asserts that the steering committee is biased toward development. As proof, she points to a January decision by the city to ax a seat designated for a Save Open Space member from the committee after SOS representative Sandy Robnett had to resign from her position because of work commitments.

"Save Open Space is obviously a very active proponent of it being 100 percent open space," explains Gaspers. "We felt it wasn’t important to have steering committee members who were committed toward working toward that goal."

Lisa Zoeller, another steering committee member, says that the committee has gotten more productive since the November election.

"I think at that point, a lot of our conversation shifted away. Earlier, it was all one side versus the other. I think the election kind of put us into a new mindset. Our whole job on the steering committee is to say, 'What do we all think is the best thing for people to put out there?'" says Zoeller, who lives by Montview Boulevard and Monaco Parkway, and used to serve as the community planning and development chair for the Greater Park Hill Community Inc. board.

Zoeller would like to see the Department of Community Planning and Development get even more creative with the mock-up.

"I thought it was maybe a little boring in that this is in the north, this is in the south, and then there’s a cut-through in the middle, and the whole east side is open," she says. "I would like to be seeing a little more detail on how those edges get used and a little more creativity in those spaces, because I think there’s probably a lot of opportunity."

One opportunity for innovation could be the stormwater detention area. "People in the local community, in the immediate community, really want athletic fields, and athletic fields are totally appropriate in a stormwater detention area," Zoeller says. "I'm not saying it has to be soccer fields, but it doesn’t just have to be a big bowl with natural grasses in it and a concrete walkway around it."

Zoeller would also like to hear more from Ho. "I would like to, for the sake of efficiency of our time as volunteers, have a conversation more openly," she says, "and I don’t think we’ve gotten there yet. I feel like we need to start talking more openly with the developer about, 'How does this work for you? Is it financially feasible?'"

Ho insists he's open to all kinds of ideas. "We’ve gotten to a point where we’re bringing more substances to the vision...and a lot of work has been done. I’m really excited to see the process continue to move forward," he says. "The vision for this site was never about green vs. concrete, and I think you can see this in the plan."