The Colorado Department of Public Health and Environment is no longer mandating that most businesses and events around the state report outbreaks of COVID-19. But a parody Twitter account written from the viewpoint of the virus took up this task after a recent high-profile gathering in Denver: StokerCon 2022, the Horror Writers Association's annual convention, which took place May 12-15 at the Curtis Hotel.

Numerous writers and attendees of StokerCon have shared their COVID-19 status on Twitter over the past week or so, and @friendlycovid19 has delighted in further disseminating the information. Take this tweet from May 12: "Hundreds of humans are crowding together in poorly ventilated indoor spaces for a horror convention this weekend and dude sometimes the jokes just write themselves."

The shadow of the disease was hanging over the get-together prior to its official launch, as evidenced by a May 9 tweet from John Palisano, an author who's also the association's president. 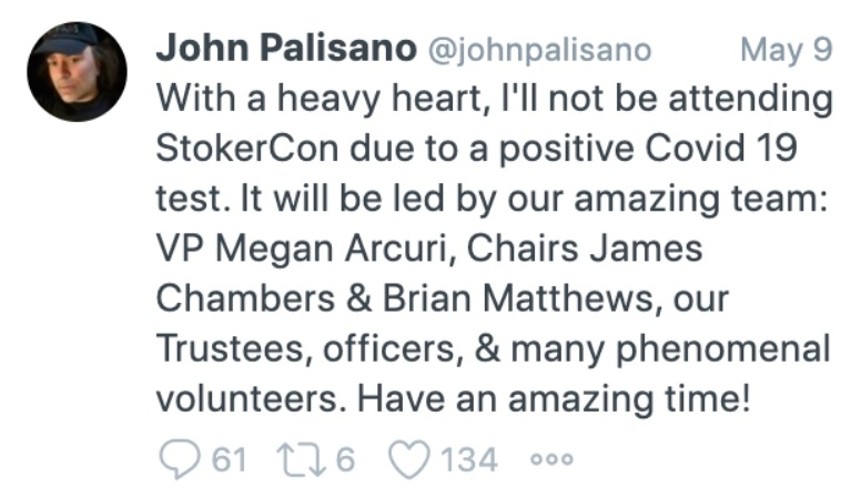 Twitter
The next day, May 10, a StokerCon pre-party was staged at the Stanley Hotel in Estes Park — an inspiration for author Steven King's The Shining. Shortly thereafter, another author, Stephen Graham Jones, referenced the bash in a tweet about his own case of COVID.

Twitter
Graham's tweet set off an online conversation among StokerCon attendees that @friendlycovid19 soon joined. After one tweeter mentioned Graham's announcement, the account responded, "But seriously, if you were really trying to avoid me, you'd also be avoiding large indoor gatherings, right? Not to mention the bar. I'm a highly debilitating virus. This is my life."

To that, author Eve Harms issued a snarky reply that pointed out that the @friendlycovid19 account had been launched late last year: "Your schtick is not cute or clever and extremely late in the pandemic (December 2021?) to have decided to start doing it. I really hope you're some kid, because an adult doing the 'I'm a cawona virus not a huwman' thing is frankly embarrassing. Log off."

That didn't happen. On May 13, @friendlycovid19 tweeted, "And as the night wears on, I see all those #stokercon masks were just costumes! (There are lots of costumes at these things.) Don’t worry horror fans. You didn’t scare ME away!" A follow-up read: "There’s already been a case of me at #stokercon and everyone’s assuring the vector it’s not their fault but I’m like dude, you’re an artist, take credit for your work."

Next, @friendlycovid19 tweeted a link to the Edgar Allan Poe story The Masque of the Red Death "because I'm a horror fan, too!" Another tweet highlighted some quotes from the tale: "With such precautions the courtiers might bid defiance to contagion. The external world could take care of itself.... It was folly to grieve, or to think. The prince had provided the appliances of pleasure. All these and security were within. Without was the 'Red Death.'"

In addition, @friendlycovid19 tweaked an attendee asking for cool places in Denver to hit, asserted that "a pandemic is how extroverts tell introverts they really are trying to kill them," and retweeted messages from at least four other people who tested positive in the days following the convention, including one from John Skipp, another author.

Skipp wrote: "This is, alas, a fact. I came back from the magnificent StokerCon in Denver — the best StokerCon EVER, in my heartfelt opinion — to a test that said, 'Oops! You got Covid.' For which I thank God and the vaxxes. Otherwise, the message would be, 'Oops! YOU'RE DEAD!!!'"

On May 18, @friendlycovid19 saluted all the "new friends I made at @stokercon! Did I miss anyone? Not bad for a 500-human convention, especially since these are only those who admitted to meeting me.... But if you don't acknowledge me, I'll always remember you fondly, humans!"