Courtesy of History Colorado
A photo from the 1997 opening of the Gay and Lesbian Community Center of Colorado, which later became The Center on Colfax.
History Colorado's groundbreaking new exhibit, Rainbows & Revolutions, has finally come to fruition after seven years of work headed by Gill Foundation associate curator of LGBTQ+ history Aaron Marcus.

"I started an exhibit in 2015 and it got pretty far — I had an advisory board going, I was at PrideFest that whole weekend doing audience testing, and then History Colorado had some financial difficulties, and basically every exhibit that was in development just stopped," recalls Marcus.

Five years later, the Gill Foundation, which supports nonprofit organizations advancing the rights of LGBTQ+ Americans, approached History Colorado to find someone who could process its archives. The foundation ultimately decided to sponsor a new associate curator of LGBTQ+ history position at History Colorado, which created the opportunity for Marcus to see Rainbows & Revolutions become a reality. Just in time for Pride, the landmark exhibit will open Saturday, June 4, at the History Colorado Center.

When Marcus, a Denver native, took on the associate curator role two years ago, the LGBTQ+ archive had fewer than 100 items, a fraction of most History Colorado collections. After being named a Champion of Pride by The Advocate magazine in 2020, Marcus received an influx of donations for the collection. Mostly through word of mouth, he has now built up the collection to include nearly 500 items. But because not every moment in Colorado's extensive LGBTQ+ history can be represented by a physical object, Marcus and his team created a detailed timeline wrapping the exhibit walls to fill in the blanks.

"One of the things that I'd like to highlight, which is on the timeline, is that this community, although not known as LGBTQ+ in any form, goes back to when Colorado was settled in 1859," says Marcus. "We know of people who were considered biologically women but identified as male, especially in mining towns. Was that because they needed a job, or were they what we could consider today trans? We have these stories, but I don't have anything [to represent] them. That's how that ends up on the timeline." Members of The Group, a gay men's outdoor activity club, in 1982.
Courtesy of History Colorado
Evidence of gay sex being criminalized in Colorado dates back as far as 1879; a letter written by a closeted University of Denver professor in 1898 shows that the city's underground gay scene predates the twentieth century. Legend has it that the first official gay bar in Denver opened in 1939, though Marcus couldn't find any proof of its existence.

Included in the Rainbows & Revolutions exhibit is an FBI memo listing members of the Mattachine Society who attended the 1959 Denver convention, including Wendell Sayers, the first Black man to work for the Colorado Attorney General's Office.

The 1970s were a pivotal decade for the advancement of queer rights in Colorado — and nationwide. Marcus debated creating an entire exhibit focusing just on those years, when tensions between the LGBTQ+ community and law enforcement were coming to a head because of the arbitrary enforcement of so-called "decency laws."

"Back in the ’70s, if you left a bar and hugged a member of the same gender, you'd be arrested for it," Marcus explains. "Jaywalking — gay men and lesbians were arrested constantly for that. There was a bus that the police used to entrap gay men, called the 'Johnny Cash Special.' They would literally drive this bus around blaring Johnny Cash music, and lure in guys with the promise of tickets, then try and get them to incriminate themselves."

This police persecution led to ongoing protests, including one when Denver police shot and killed two trans women of color. At the same time, many fledgling queer organizations were born, including the feminist publication Big Mama Rag (established in 1972), the Woman to Woman Feminist Bookcenter, Out Front (established in 1976), and the Gay Coalition of Denver (established in 1971), which organized Denver's 1973 revolt on Denver City Council. In a huge victory for LGBTQ+ rights, the revolt at city council led to four anti-decency laws being overturned, earning the event the nickname "Colorado's Stonewall."

The 1972 cover of the first issue of the feminist publication Big Mama Rag.
Courtesy of History Colorado
The 1980s portion of Rainbows & Revolutions focuses heavily on the rise of the HIV/AIDS epidemic, told through oral histories of those who survived it, including Joseph Marchione of EPOColorado. It also highlights the 1987 emergence of ACT UP (AIDS Coalition to Unleash Power), and while many of the organization's original founders have passed away, some of their surviving partners spoke with Marcus and donated artifacts from those days. "I wasn't able to meet them, per se. But in a weird way, I feel like I have," he says.

Amendment 2, which prevented cities in Colorado from enacting anti-discrimination laws to protect LGBTQ+ people, is the focal point of the 1990s section. "In the 1990s, we have to talk about Amendment 2. So many things, including marriage equality, are based on the foundation that Amendment 2 built. Without it, we wouldn't have all the advances we have had," says Marcus, who participated in protests against Amendment 2 at the time.

Frank Brown, who worked for the Colorado Legal Initiatives Project, which helped overturn Amendment 2, donated many of the ’90s-era artifacts on display, including one of the original court briefs filed with the U.S. Supreme Court. Brown's personal archives proved invaluable to the exhibit. "His collection has a lot of Amendment 2 stuff in it that I couldn't have found any other way," Marcus says. "He literally slept on the steps of the Supreme Court the night before to make sure he got in to hear the oral arguments." 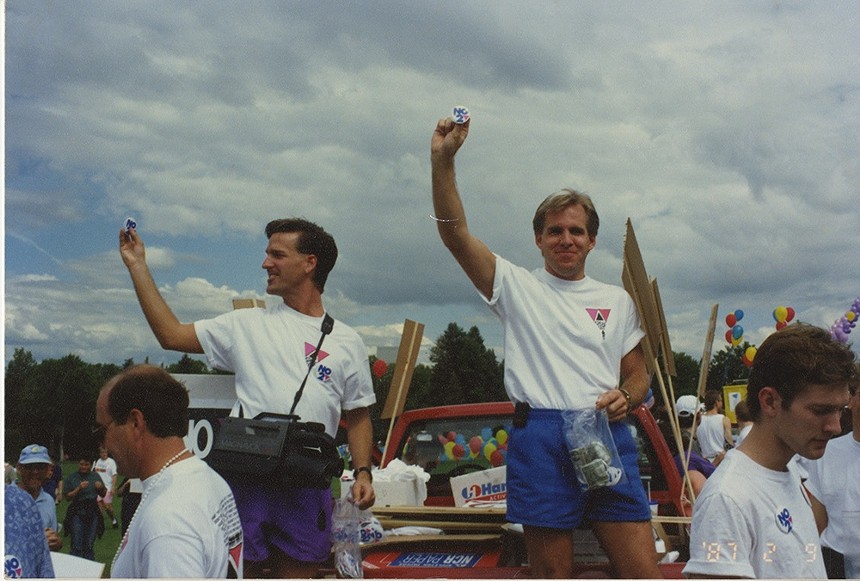 Colorado activists Tim Robinson and Frank Brown sell "No on 2" buttons at the March on Washington in 1993.
Courtesy of History Colorado
Rainbows & Revolutions continues to the present day, with the 2000s timeline highlighting trans health care, recently developed medications for HIV/AIDS prevention and treatment, drag, adoption rights and gay marriage. Items from this time include a gown worn by drag queen Juiccy Misdemeanor at the 2021 inaugural Black Pride Colorado; Governor Jared Polis's signature blue tennis shoes from his 2018 gubernatorial campaign; and artwork by Maya Youcef-Toumi, a queer Latinx artist based in Colorado.

While the exhibit pertains to all of Colorado, there is a particular focus on the Denver metro area. Marcus says he wanted to include more statewide representation but was limited by time and space constraints. "A lot of stuff did not make the cut and should have, because to me it's important," he admits. "But for me, everything is important, so I would need a space at least three times that size. That's kind of why we did the timeline, to give more of the outside-of-Denver stories, but a lot of the stories, even though they happened or started in Denver, had statewide ramifications."

It was crucial to Marcus that Rainbows & Revolutions represented as much of the Colorado LGBTQ+ community as possible, not just white cis gay men. "That was my goal from the beginning, to try and make this as diverse and inclusive as possible," he emphasizes. "History Colorado doesn't have a good track record with minority communities. So I spent a good part of these last two years rebuilding relationships with a lot of the community."

He worked with a team of individuals to create the exhibit, including Soleil Hanberry-Lizzi, Madeline Ohaus, Kate Burns and Teddy Scott, all of whom identify as part of the LGBTQ+ community. Other contributors include Vicki Piotter, the co-founder of Woman to Woman Feminist Bookcenter, and state representative Leslie Herod, the first openly gay African-American elected to the Colorado Legislature. Marcus is grateful to have had the help of such a diverse group of artists and activists.

"I am very thankful for my whole team," he says. "If it were just me, I don't want to date myself, but talking to people like Soleil and Madeline, God, I feel old. They know stuff that I have no clue about."

Vicki Piotter, the co-founder of Woman to Woman Feminist Bookcenter, donated these pins from the lesbian feminist movement in Colorado that took place from the 1970s through the 1990s.
Courtesy of History Colorado
Having an exhibit like Rainbows & Revolutions gives Colorado's LGBTQ+ community a chance to engage with its own history, a history that is often excluded from textbooks and classrooms.

"Everything I've learned during this position was never discussed in any history class, even once I got up to the college level," reveals Marcus. "It's kind of shocking, because there are some moments that happened that I feel like had just as big of an impact as anything else in this state. Our experiences are part of the story of Colorado."

The danger of not knowing our history is that we become doomed to repeat it, which Marcus sees happening across today's political landscape. "Either people don't know our history or don't care, because it's all happening again," he says. "One of the photos we have is of someone with a sign that says, 'Stop Police Attacks,' and if we just changed the date to today's date, it's still valid."

A stained glass piece by Denver artist Mattie Sue Athan that hung above the door to the Woman to Woman Feminist Bookcenter.
Courtesy of History Colorado
Though we still have a way to go to ensure full equality and equity for the LGBTQ+ community, Marcus says that Rainbows & Revolutions offers a gateway to queer trailblazers that his generation never had. While the exhibit is far from all-encompassing, it exposes viewers to a world they may not have had access to, and Marcus hopes it will inspire people to do further research on their own. And that is his ultimate goal.

"As a historian, I feel a responsibility to preserve and pass along the stories of the LGBTQ+ community so we can all learn from them and add to them," he concludes. "By using our voices to document what we've been through, we hope to pave a smoother path forward toward equality and full acceptance, to become a truly inclusive and stronger community for everybody.".

Rainbows & Revolutions opens at the History Colorado Center, 1200 Broadway, on Saturday, June 4. The exhibit will be open for six months, then travel around the state to other History Colorado centers.