Colorado Concealed Carry: How Many of Your Neighbors Are Packing Heat 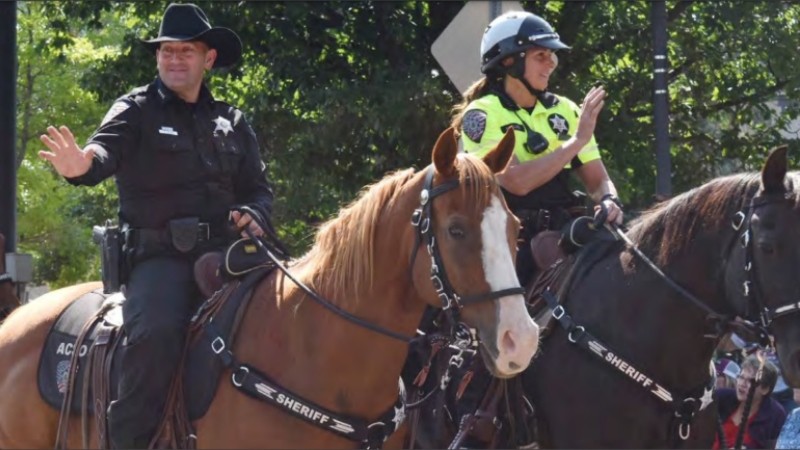 arapahoegov.com
Arapahoe County Sheriff Tyler Brown, left, in the front-cover photo from his office's 2021 annual report.
The 2021 annual report from the Arapahoe County Sheriff's Office, released this week, is largely promotional, with page after page festooned with photos of happy, smiling law enforcement officers greeting children, petting dogs and so on. But it does include some specific data on a topic that frequently gets treated in a general way: the increasing demand for permits allowing residents to carry a concealed firearm.

The ACSO isn't alone in compiling such statistics. The Colorado General Assembly has required sheriff's offices in every Colorado county to submit detailed annual reports on the subject every year since 2003; they can all be found on this statutory reports page overseen by the Colorado Legislative Council. The stats reveal an enormous upswing in the number of Coloradans legally sanctioned to pack heat.

To get a sense of how concealed-carry permits have proliferated over the past decade, Westword accessed reports from 2011, 2019 (the year before the COVID-19 pandemic and the George Floyd social justice protests supercharged interest in firearms across the country), and 2021. Here are the totals for Arapahoe County, which reveal a four-fold increase from 2011 to 2021. (Note that the 2021 and 2019 surveys offer separate sums for new and renewed permits, while the 2011 edition combines them.)

The Colorado counties that have issued the most concealed-carry permits are generally the most populous, including Adams, Arapahoe, Denver, Douglas and Jefferson in the metro area, as well as El Paso County, anchored by Colorado Springs, and northern Colorado's Larimer and Weld counties. Increases occurred in all of these jurisdictions: doubling, tripling, quadrupling or even quintupling over the past ten years. While liberal Denver County, whose city council passed an ordinance banning concealed carry in city buildings and parks last month, saw the most modest bump, conservative El Paso County experienced by far the largest spike.

Here are the numbers for all of those counties, ranked in ascending order by 2021 concealed-carry totals.


The concealed-carry permits either issued or renewed in just these eight counties add up to more than 50,000 in 2021 alone. But how many of these people actually carry a gun most of the time? "Concealed Carry Permit Holders Across the United States: 2021," a study by Crime Prevention Research Center authors John R. Lott and Rujun Wang published last October, references a 2017 Pew Research Center survey that found the following:

After doing the math, Lott and Wang conclude that the total number of concealed-carry permits is at least 21.52 million, or about 8.3 percent of the adult population in the United States. Moreover, they determine that approximately 5.4 percent of Americans carry a gun with them all or most of the time.

Not counting those who presumably do so without bothering to get a permit.

Click to see Colorado concealed-handgun permit reports from 2021, 2019 and 2011, plus the 2021 Arapahoe County Sheriff's Office annual report and the study "Concealed Carry Permit Holders Across the United States: 2021."