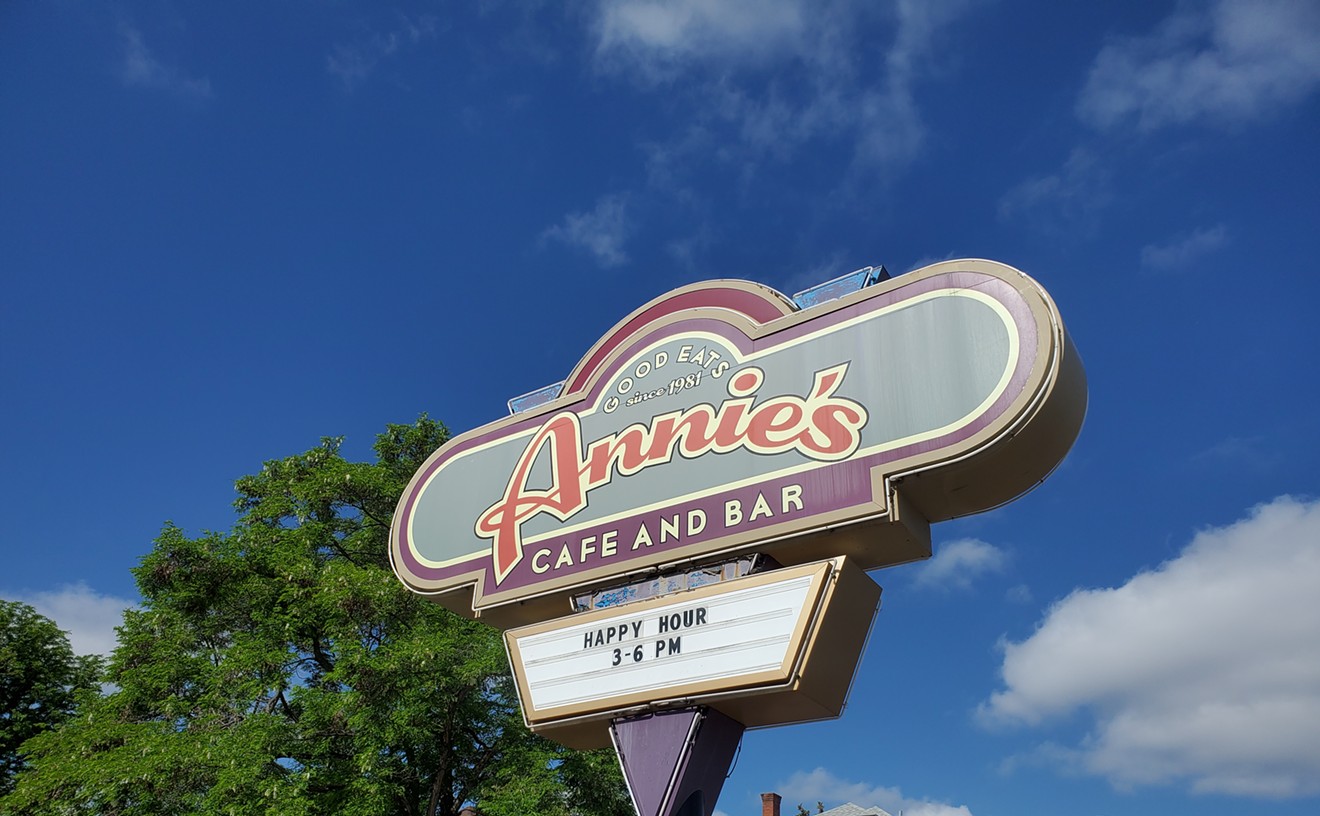 Molly Martin
Annie's Cafe opened in 1981 and moved to Colfax fourteen years ago.
Last June, Annie's Cafe & Bar, at 3100 East Colfax Avenue, celebrated forty years in business. This June, owner Peggy Anderson and her staff are gearing up for another celebration — though this one is bittersweet: The building that houses the restaurant has been sold, and Annie's will close its doors for good on Sunday, June 26. "I want to use this last month to celebrate being in business this long," Anderson says. "I want it to be a memorial: to celebrate our life, our great customers and our gratitude that Denver's always been so great to us."

Anderson opened Annie's in 1981 with then-co-owner Diane Williams; you can read about how the pair negotiated the eatery's move from its original spot on Colorado Boulevard (after 27 years!) to its current home on Colfax Avenue in our previous coverage. Plenty of operators would have called it a day after nearly three decades in business — already a more than respectable run — but Anderson and her crew stuck it out for another fourteen years.

"We’ve been through so many economic downturns," the owner reflects. "I’m surprised we made it through the pandemic, and I'm proud we did. It's kind of weird we're closing now." But Anderson, who recently turned seventy, says she's ready to retire. Couple that with the fact the building has been sold and its new owners intend to open a second location of Spice Room Neighborhood Indian Bistro there in September of this year, and Anderson is looking forward to letting go of the stress of business operations. "I'm going to enjoy clearing everything out of the back of my head," she admits. "You wake up at night wondering about food costs and when is this piece of equipment going to break. The pipes burst eighteen months ago and flooded. I'm not going to have to deal with that stuff anymore. It will be nice to have things peaceful." 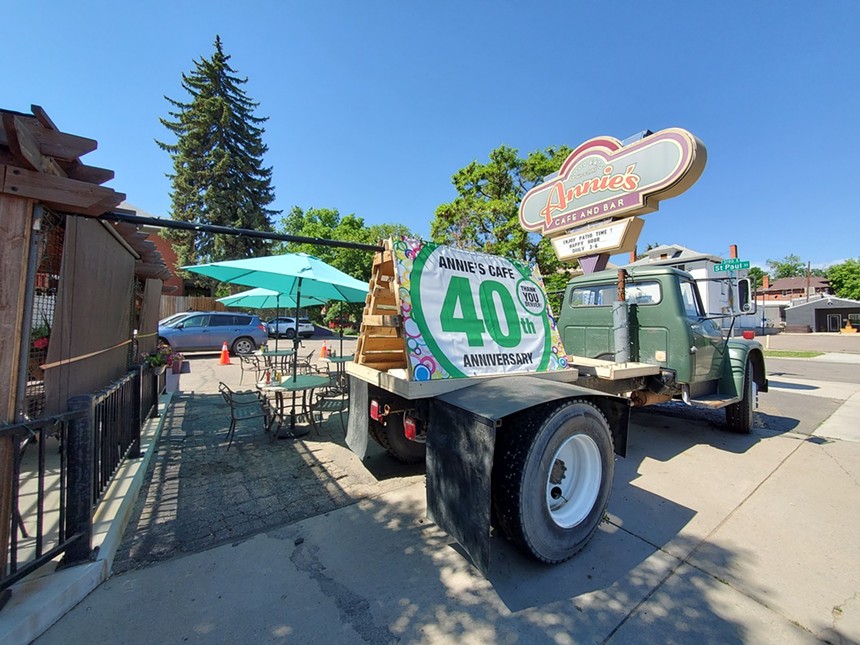 Annie's celebrated forty year in business in 2021.
Molly Martin
In lieu of spending her days at Annie's, Anderson says she's excited to spend time with her five grandchildren (some of whom work in the restaurant seating customers and making milkshakes). She also plans to visit family members scattered across the country. "I just want to be with people," she confesses.

On the flip side, though, she knows closing Annie's will mean the end of relationships with staff and customers she also considers family. "One of the hardest things is the customers' reactions," she says. "I had a gentleman say, 'I don't know what I’m going to do. This is the only restaurant I eat at.' ... Our employees have been with me so long, and they will be dearly missed." She reels off a list of milestones customers have celebrated at Annie's over the decades: blind dates, first dates, breakups, rehearsal dinners, weddings, memorial services.

Anderson recalls a story that unfolded over the course of 22 years and illustrates the bond between herself, her staff and her customers: "We had a family come in with their son on his 21st birthday. His mom came to Annie's when she was pregnant [with him], and she remembered her favorite server, Troy, making her a milkshake and bringing it to the hospital." At the time, Annie's was located just a couple of blocks from Rose Medical Center, and she notes that it wasn't uncommon for regular customers in labor to stop in for a bite on the way to the hospital, then send their partners back to the restaurant to retrieve a post-delivery milkshake.

The family continued to frequent Annie's, and when the son became a picky toddler (or "weird little kid," as Anderson jokes), he didn't like points on his French fries. So to please her tiniest customer, one of Anderson's employees, Holly, would cut the points off the little boy's fries.

"It feels good to know we've been a part of customers' lives," Anderson concludes. 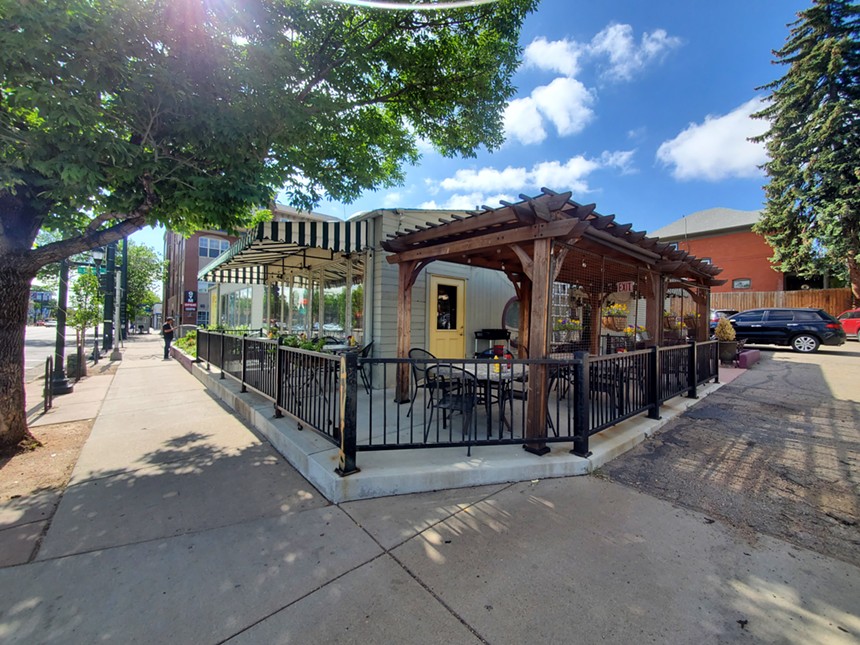 Spice Room Neighborhood Indian Bistro will open in the Annie's space this September.
Molly Martin
It's not just longtime customers who will feel the sting when Annie's shutters. "It runs the gamut, because we’re always gaining new customers," Anderson says. She recalls a recent group of diners lamenting they'd only recently discovered the restaurant after moving to Denver a year earlier. "They said, 'We moved into town about a year ago, and we just found you, and now you're going to be gone.' I’m losing all these caring and considerate people." She counts her staff among them, and describes their relationship as very reciprocal. "I take care of them and they take care of me. ... Even now, when I'm emotional, they say, 'Go on, Peggy, we’ll handle it.' And they do."

Anderson plans to keep Annie's regular hours and full menu right up until its final days, so if you're a regular, there are still a few weeks to savor your favorite dish and maybe even put in an offer on a particular piece of art or one of the vintage lunchboxes that line the walls (Anderson is selling the collection). If you still haven't been (or haven't visited recently), it's never too late to get to know an iconic restaurant. After the last enormous omelet has been served and peanut butter milkshake whipped up, she's looking forward to a big party for the Annie's crew.

"Life is precious," Anderson states. "I just feel lucky that I opened a restaurant...and got to close a restaurant."