Keef Brands could face licensing discipline in Denver after THC-infused beverages were nearly served at this year's Mile High 420 Festival, according to city documents.

The festival, which took place at Civic Center Park, celebrated America's unofficial marijuana holiday with a concert and lots of unsanctioned pot smoking on April 20. An annual tradition that began as a rally in defiance of marijuana prohibition decades ago, the 4/20 event at Civic Center has since turned into a permitted event with live music, food, beer gardens and vendors.

Although marijuana consumption isn't allowed on city-owned parks or property, and vendors are banned from serving or selling any marijuana or THC-infused products at the 4/20 festival, pot smoking is still very visible at the event. But while zero public marijuana consumption citations were handed out by the Denver Police Department during this year's fest, the City of Denver does not look the other way on vendor compliance, and sent out warnings in advance of the event.

According to a show-cause order sent to Denver Packaging Company, inspectors with the Denver Department of Excise and Licenses discovered a vendor booth at the 420 festival preparing to sell THC-infused sodas to visitors before the event opened to the public. Inspectors reportedly saw Colorado's THC warning sign, which is placed on all regulated marijuana labels, as well as childproof packaging and marijuana harvest batch information, on the cans.

State Marijuana Enforcement Division records show that Denver Packaging Company is owned by Andrew Vernon, who later identified himself to city inspectors as an owner of Keef. Denver Packaging and Keef share the same business address in Denver; no other Colorado marijuana manufacturing facilities connected to the brand are listed on the MED's licensing database.

Vendors were told not to bring marijuana or THC-infused products to the Mile High 420 Festival, say event organizers, who were contacted by inspectors shortly after the cans were found. Excise and Licenses cannot comment on open cases, according to the department, but there is no mention of THC-infused Keef sodas actually reaching the hands of event-goers in the report. 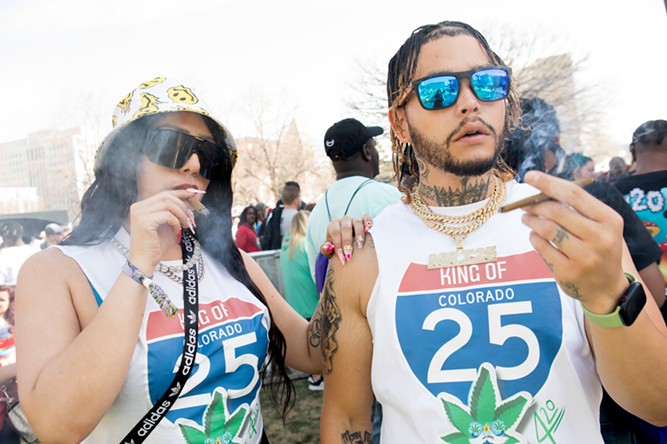 The Mile High 420 Festival at Civic Center Park has always hosted unsanctioned pot consumption, but licensed companies can't get in on the fun.
Jacqueline Collins
Inspectors said they discovered the cans while the booth was unattended, and waited over an hour until an employee arrived five minutes after the festival started. The employee worked for a separate promotion company contracted for the festival, and allegedly told inspectors that she was instructed to pour cups of Keef sodas and hand out cans. Several minutes later, Vernon arrived and was unable to tell inspectors how the THC products arrived at the event, according to the report.

When an inspector pointed out that no labels on the cans included store tracking information, a requirement for all retail marijuana products sold at dispensaries, Vernon claimed "that it 'definitely' came from a dispensary," the report notes.

All regulated marijuana products in Colorado are supposed to be tracked by harvest batch numbers from seed to sale. The city inspector requested that Vernon send a copy of a transport manifest detailing how the drinks were shipped from Keef's production facility to a dispensary before ending up at Civic Center. Vernon agreed to remove the THC-infused drinks from the event immediately, but no transport manifest was provided to Excise and Licenses detailing where they came from, according to the show-cause order.

Keef violated advertising, tracking and voluntary inspection rules during and after the 4/20 festival, says the Denver City Attorney's Office, which requested the show-cause order. Excise and Licenses director Molly Duplechian granted the request, and Keef is now scheduled for a July 21 hearing to demonstrate why its medical and recreational marijuana manufacturing licenses shouldn't be suspended or revoked.

Keef Brands has become a multi-state marijuana business since launching in Colorado in 2010. The company's products is now available in seven states, Puerto Rico and Jamaica, but the brand's headquarters and most extensive line of products remain in Colorado. Keef did not respond to requests for comment.

The Denver marijuana business most recently subject to such a hearing was Den-Rec dispensary, whose former co-owner was arrested for allegedly trying to sell pounds of marijuana on the black market to an undercover police officer. Den-Rec settled with Excise and Licenses without having to close either of its two stores in Denver.