American Muckrakers — the PAC that played a big role in Representative Madison Cawthorn losing his re-election primary bid — dropped another bomb last week, this one on Representative Lauren Boebert. But the gun-totin’ congresswoman from Colorado CD3 is firing back.

After setting up the fireboebert.com website, which includes sections on assorted documented Boebert misdeeds including a drunk-driving incident and ethics investigations, American Muckrakers published a report on June 14 claiming it had "uncovered that Lauren Boebert was an unlicensed, paid escort and met clients through SugarDaddyMeet.com." The PAC says it has text messages that show Boebert was going through severe financial issues, was looking for "side income" and called the work "pay to play."

According to American Muckrakers, its investigation found evidence that Boebert was hired by a Koch family member in Aspen, who in turn introduced her to Senator Ted Cruz, who later encouraged her to run for Congress. Cruz reportedly donated $136,250 to the Boebert campaign, a large portion of which Boebert failed to disclose.

Boebert, who is on record as supporting overturning Roe v. Wade and taking away a woman's right to choose, is also being accused of having at least two abortions herself: one in 2004 or 2005, and another in 2009. American Muckrakers says it has evidence that the second abortion resulted from her work with a SugarDaddyMeet.com client.

Boebert immediately denied the accusations, which she says are "blatantly false and disgusting." She told Fox News that she would not "stand by and pretend this is normal behavior."

And then, of course, she took to Twitter. "I will not let these false smears from left wing political operatives go unanswered," she said, threatening criminal legal action. 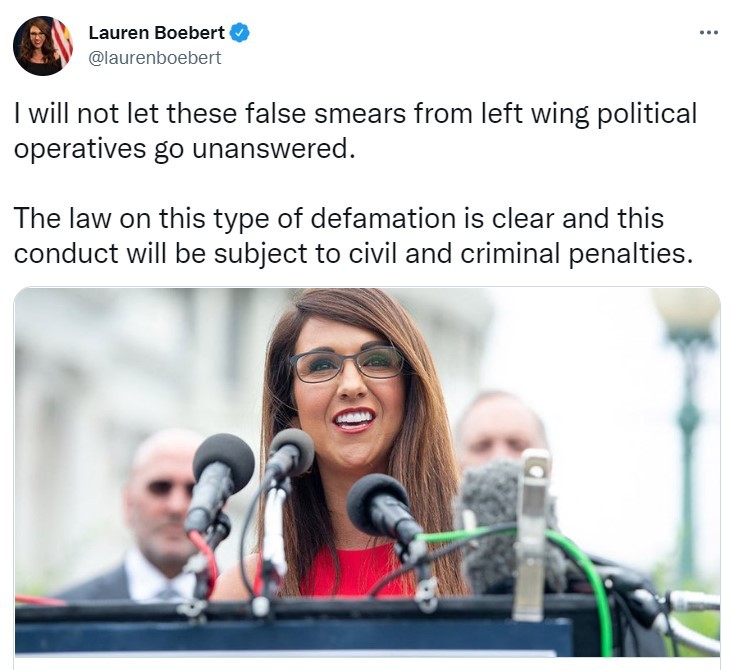 Twitter
But some of those "left wing political operatives" are actually coming to Boebert's defense. Mother Jones, which recently published a not-positive profile of the politicians, has recommended that its readers "Stop Spreading Those Deeply Misogynistic Rumors About Lauren Boebert," making the point that there are any number of valid and provable reasons Boebert shouldn't be re-elected.

American Muckrakers lists some of these on its website, including tax fraud and money laundering, as well as husband Jayson's undisclosed six-figure paychecks as an energy consultant while Boebert was pushing to loosen drilling rules on the House Natural Resources Committee.

So far, Boebert's promised legal action is a letter from an attorney, written to American Muckrakers president David Wheeler. It says that the PAC's "illegal conduct has created substantial criminal liability for the organization as well as individuals personally engaged in circulating false statements." The letter also specifies that the accusations are based on "knowingly false statements," and promises that "this will be a costly miscalculation."

Lauren Boebert may or may not have worked for SugarDaddyMeet.com. She may have had two abortions, or one, or none. That could be up to the American Muckrakers to prove, and then up to the public to decide if it matters.

But in the meantime, there's a lesson here, for Boebert and everyone else on the far edges of politics: To paraphrase both Jay-Z and Ari Melber, sometimes the sword that knights you is the same sword that good-nights you. Reprehensibility begets reprehensibility.