Ashlee Redger
Mile High Fungi offers a variety of cultivated and foraged mushrooms at its farmers' market stands.
It's peak season for farmers’ markets. No matter your neighborhood, you can find local produce and handcrafted goodies near you. In Farmers' Market Finds, recipe developer and freelance writer Ashlee Redger highlights some stand-out local farmers' market vendors and dishes up a recipe using their goods. 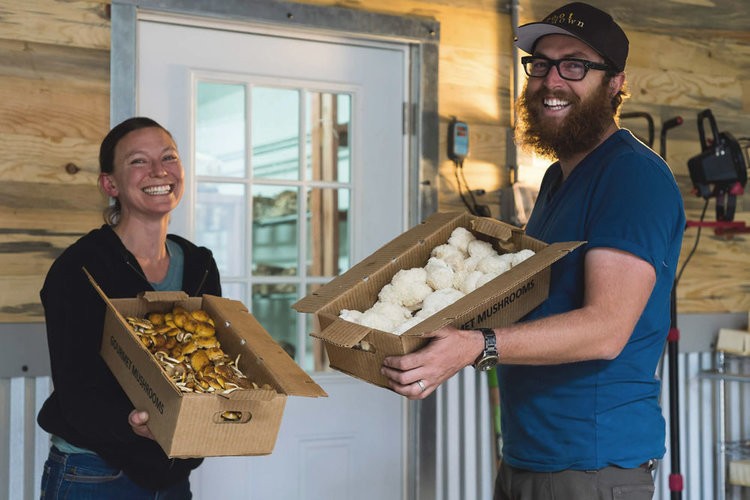 "I don't think either one of us liked mushrooms [growing up]," Michael jokes. "But when we went to college, we were like, 'We can't be those people. We gotta give this stuff a try.'" They began foraging in the Pacific Northwest, where Michael says mushrooms are "ubiquitous in the environment." They'd even find varieties like chanterelles growing in patches in between some of their classrooms.

When the young couple moved to Denver, Michael took a job with Denver Urban Gardens, and they both moonlighted in the cannabis industry. It didn't take long for them to look around and see a hole in the market for locally produced gourmet mushrooms, which they eagerly attempted to fill. Mile High Fungi was born in 2014.

Michael described their efforts in those early days as "failing forward." The mushrooms were grown in shipping containers in the couple's backyard. "There was very little information available online ... We pretty much just struggled our way through it. We had more failures than successes," he admits. Slowly, Mile High Fungi started growing as partnerships with CSA programs developed, along with its presence at farmers' markets and selling wholesale to restaurants. But that wasn't the end of  Mile High Fungi's obstacles.

Just over six years ago, the Nails ran into zoning issues with the City and County of Denver. It turned out to be a "blessing in disguise," Michael says, because it prompted them to create their own farm in Conifer. The Nails' property was raw land without power or well access. Doing almost all of the work themselves, Michael and Liz have proudly built up their growing facilities over the past five years. Now with a young daughter, the Nail family completed their home two years ago, separating their private life and business lives by about a hundred yards.

These days, Michael describes Mile High Fungi's farm as having "lots and lots of shelving. ... Very few things in our farm are not on wheels of some sort." It utilizes the property's lab space to sterilize about 2,500 pounds of raw material at a time to create the perfect substrate (growing material) for mushrooms, a process that can take anywhere from two weeks to three months, depending on the mushroom variety. Mile High's mushrooms start off in a Petri dish before they're moved to sterilized cereal grains and, lastly, to sterilized substrates of hardwood sawdust and other organic supplements, including soybean hulls, which add the perfect boost of nitrogen for mushrooms to thrive. This type of system is juxtaposed to larger-scale farmed varieties like button mushrooms (secondary decomposers) that get their nutrients from agricultural byproducts, like used animal bedding, hay and manure. Compared to the intense aroma associated with button-producing areas, Michael affirms that Mile High's farm smells like a combination of a brewery and a woodworking shop.

He estimates that it produces 30 tons of mushroom compost a year from the remainders of the wood substrate after the mushrooms have eaten their fill. That gets spread over the rest of the Mile High Fungi farm, where corn, beans, squash, potatoes and raspberries are grown.

This year, the Nails are even attempting to combine fungi with their traditional farming ventures by inoculating the soil of their corn crop with King Stropharia mushrooms (also known as wine caps) in order to create huitlacoche, a deeply historical and highly sought-after delicacy of the Southwest U.S. and Central America. Huitlacoche, also called corn smut, is the fungus that causes infected kernels to swell and take on an ashy-blue coloring. The flavor is often compared to truffles and is an earthy, savory and slightly sweet combination of mushroom and corn characteristics. Wild-foraged mushrooms include chanterelles, morels and lobster (the bright-red mushroom at the bottom).
Mile High Fungi/Instagram
Mile High Fungi is planning to bring some of these non-mushroom goodies to market this year, and to continue increasing production for next year. For now, you can get its cultivated mushrooms, including shiitake, blue oyster, chestnut and lion's mane, at the South Pearl Street and Highland Square Farmers Markets on Sundays. You'll also find seasonal wild-foraged fungi at the stand, like bright-red lobster mushrooms, which are some of Michael's favorites. "It's a parasitic mushroom that eats other mushrooms and turns them into lobster mushrooms. For a lot of dishes, like lobster mac [and cheese], you wouldn't know it wasn't lobster."

Lobster mushrooms are only in season for a limited time, so go soon if you want to try them. Don't sleep on the other mushroom varietals, either. At the end of the market season, Mile High Fungi turns its focus away from "fruiting" production to creating wholesale blocks and liquid cultures, which are sold primarily to other mushroom farms across the country.

Glaze sautéed mushrooms with a mix of soy sauce and honey for an easy weeknight side or addition to pasta.
Ashlee Redger
How to Use It: Vegetables like heirloom tomatoes can vary from one another on how sweet, acidic or savory they are, but fungi go beyond that. Depending on the species, they can differ drastically in texture (like shreddy lion's mane versus crisp chestnut mushrooms) and in flavor (like the aforementioned lobsters versus bitter beech clusters).

In general, most mushrooms are easy-going, tasting just as great when sautéed fast and hot as they are when simmered for hours in a stew. Try getting a mix and use them to top homemade pizzas, grill them in a basket or toss into stir-fries. To let the mushrooms shine (with a little boost), make Soy & Honey Glazed Mushrooms.

2 tablespoons tamari or soy sauce
2 tablespoon honey
1 tablespoon water
1 clove garlic, grated or very finely minced
2 to 3 tablespoons oil (whatever you normally use for cooking is fine — canola, olive, avocado, etc.)
4 to 6 ounces your choice of mushrooms, cut into strips or broken into smaller clusters
Herbs like thyme, rosemary or parsley, to garnish (optional)
Serve these glazed mushrooms as a side dish, or toss them into cooked noodles with an extra splash of tamari. Processing chiles is more fun with friends.
Will Dozier
Bonus farmers' market finds: If you haven't gotten to any markets yet this season, now is the time to go. Early August is the culmination of most growing seasons, and you'll have the greatest variety of local produce in the next few precious weeks. If you still need to know what to focus on, look for these: