Killmer, Lane & Newman, LLP
Photos of Lauren Gotthelf and Travis Cole while in Boulder County Sheriff's Office custody.
Two days after the Boulder County Sheriff's Office agreed to pay $400,000 to settle a lawsuit filed by a woman who'd been tased while under restraint, a sergeant with the department jolted Travis Cole under extremely similar circumstances.

Now Cole is pressing his own suit, which is accompanied by a startling video of the September 2020 incident. His attorney, Mari Newman of Denver-based Killmer, Lane & Newman, LLP, sees the timing as telling. "That's what's really stunning about it," she says. "When you see law enforcement officers doing the exact same thing that their department just settled a civil-rights lawsuit for, you know the problem isn't just one or two people. It's a systemic problem coming from the top. And that's particularly true here, since the person who tased Mr. Cole when he was restrained was a sergeant."

Boulder County Sheriff Joe Pelle disputes these assertions, arguing that because Christopher Mecca, the sergeant in question, violated departmental rules, he should be held solely responsible for what happened — and Mecca is no longer a member of the BCSO. He was fired for his actions involving Cole, then arrested in October 2020 and convicted in December 2021 for third-degree assault and official misconduct. The next month, Mecca was sentenced to time-served plus two years' probation, sixty hours of community service and the requirement to attend a "Making Better Decisions" class. 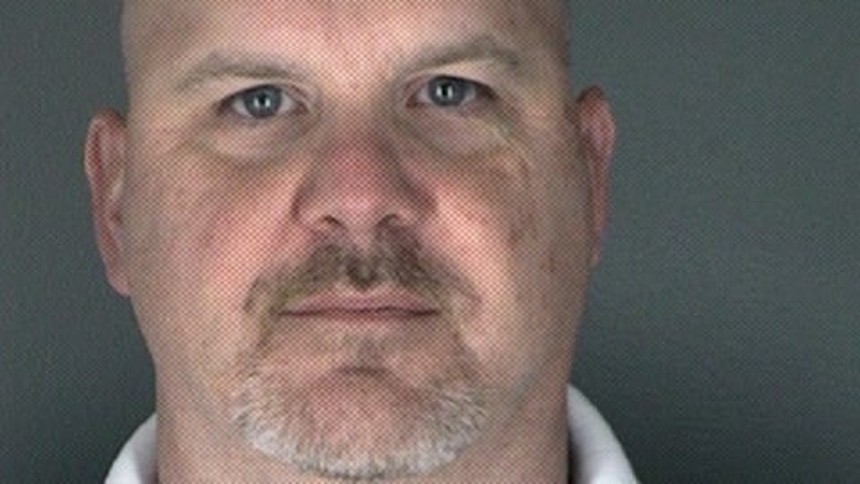 The booking photo of former Boulder County Sheriff's Office Sergeant Christopher Mecca.
Boulder County Sheriff's Office
Nonetheless, Pelle is listed as a defendant in Cole's lawsuit, along with several additional law enforcement officers affiliated with the BCSO, who did nothing to stop Mecca from tasing Cole and failed to blow the whistle on him afterward, according to Newman.

Newman also represented Lauren Gotthelf in the aftermath of her encounter with Boulder authorities on November 25, 2017. On that day, she was smoking a cigarette and walking on the Pearl Street Mall with her dog, Sage, who had just posed for a photo with a costumed Santa Claus, when she was stopped by Boulder Police officers. Before long, she'd been arrested, taken to jail, ordered to disrobe, strapped to a restraint chair and subjected to multiple pain compliance techniques, including a taser blast to the leg — all because of a supposedly suicidal remark she denied making.

Here's a video of the incident:
The Boulder County Sheriff's Office initially denied any improper actions, with Pelle issuing a document titled "Statement Regarding the Use of Force Lawsuit from Lauren Gotthelf." In it, he claimed that Gotthelf had exhibited "disruptive" behavior after being taken into custody and made "negative, vulgar" comments to deputies for 45 minutes before staffers turned to a taser, which had been used with great care. "In short, the deputies did not use excessive force against Ms. Gotthelf," he concluded.

Nonetheless, the BCSO agreed to settle the suit on September 21, 2020, with a $400,000 payment and a pledge to make several procedural changes — the first of which was a prohibition against tasing anyone in a restraint chair. "Sergeant Mecca made it very clear to his commanding officer that he didn't agree with the prohibition against tasing a restrained person that had come out of the settlement — and this wasn't the first time he was talked to about his unwillingness to follow policies," Newman says. "But the problem is, that's all that ever happened. He was talked to but never formally disciplined — and he went on to do exactly as one would expect."

Cole was taken into custody during the early hours of September 23, 2020, on misdemeanor charges. (Details included in the arrest affidavit against Mecca say the offenses were related to domestic violence, but those were dismissed; Cole eventually pleaded guilty to a minor obstruction count.) At Boulder County Jail, he was uncooperative, choosing to passively resist orders — and in response, Newman says, "he was strapped into a restraint chair, spit bags were pulled over his head, and Sergeant Mecca taunted him before placing a taser against his leg and goading him some more. And then, while multiple Boulder County Sheriff's officers looked on and failed to intervene, he electrocuted Mr. Cole for approximately five seconds."

In her view, "The entire purpose of the taser was to debilitate and cause pain — and Mr. Cole was fully restrained. He presented absolutely no threat to anyone. The one and only reason why this Boulder County sergeant tased him was to sadistically inflict pain, and that's unconstitutional."

Here's a video of the incident:
News coverage of Mecca's prosecution contended that he "self-reported" the tasing, but Newman believes this phrase is misleading: "In his report, he said he thought it would look bad to use force on a Black man on video, and so he made the specific choice to use the taser because of Travis's race. And that's a blatant violation of the Constitution."

She adds that "none of the Boulder sheriff's deputies who were there reported this unconstitutional use of excessive force. The only reason it came to light was because some officers from the Longmont Police Department were there, too. They observed Boulder's unconstitutional conduct and reported it to their own superiors, and it made its way to Boulder. So the only reason that Boulder took action against Sergeant Mecca was because his misconduct was reported by the Longmont police, who observed it in horror."

In response to the lawsuit filing, Sheriff Pelle provided Westword with the following statement: "The Boulder County Sheriff’s Office had a policy in place prohibiting the use of a taser on a restrained inmate at the time of this event, and our staff had been trained on that policy. The involved deputy (Sergeant Mecca), was placed on leave within hours of the incident, and within a few weeks he was separated from our employment and charged with misdemeanor assault. The Sheriff’s Office acted quickly and with full public transparency in the handling of this misuse of force, and to hold the former employee accountable. The Sheriff disagrees with the allegations in the lawsuit alleging culpability on the part of our agency, and counters that the former employee acted outside of our policy and training, and bears responsibility for that decision alone."

Newman calls this response "interesting and predictable. ... Boulder's fundamental failure is its refusal to take accountability for its own role in allowing this to happen — and that doesn't include scapegoating one employee. It means doing the right thing and acknowledging when you're wrong."