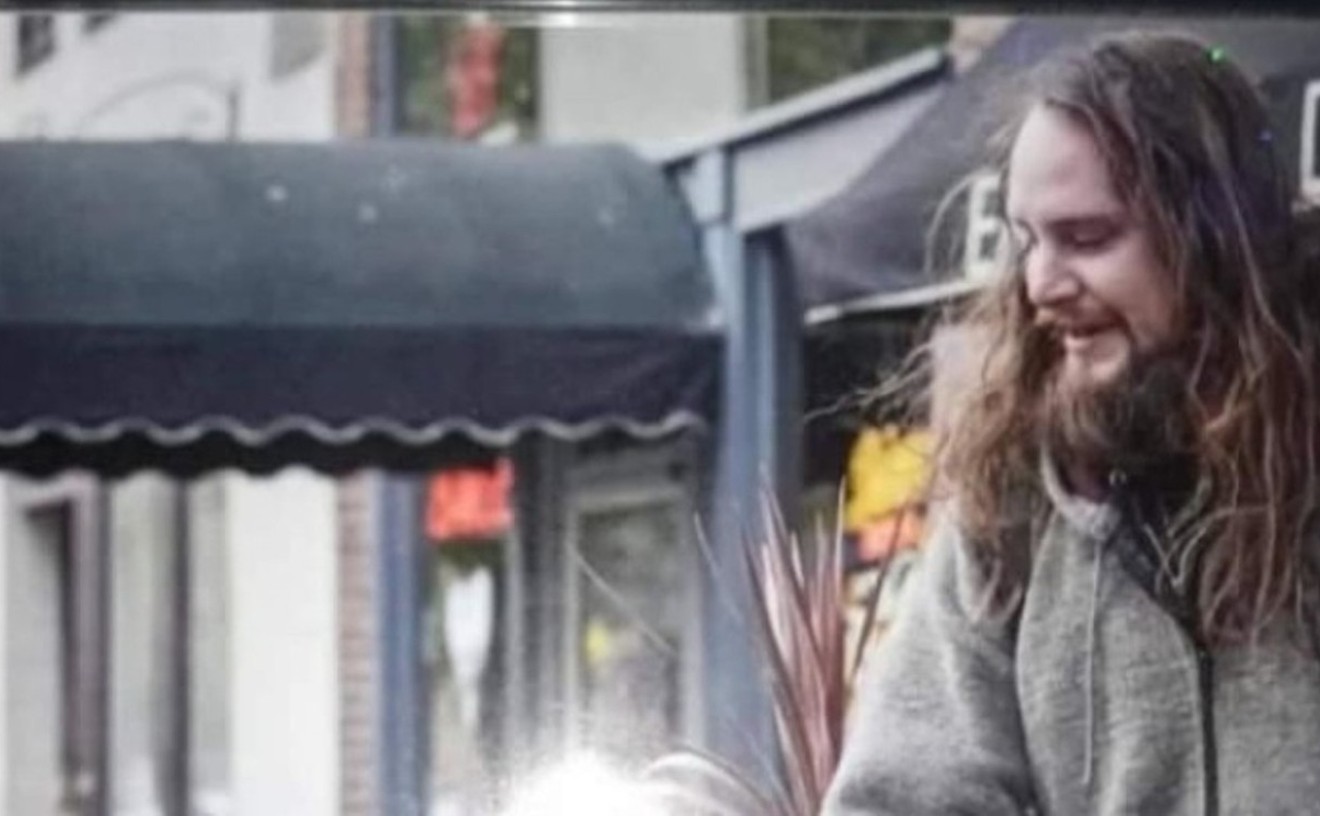 Family photo courtesy of Amanda Cyr
A portrait of the late Jacob Cyr.
Human remains found in Routt County near the setting of this summer's fiftieth annual gathering of the Rainbow Family, a throwback collective that takes its cues from the original hippie era, have been positively identified as those of Jacob Cyr, a 32-year-old Iowa resident who went missing after traveling to Colorado for the event.

Amanda Cyr, Jacob's sister, spoke about her brother for an August 24 Westword post. The two were "very close in age," she said. "He's less than a year older than me, and we did everything together growing up. We weren't in as close of contact as adults, but he's a really nice person and very spiritual. He wants to be at peace with everybody. I think that's why he's been going to these Rainbow Family gatherings."

The crowd for the fiftieth-anniversary edition coalesced slowly, arriving in the weeks prior to Independence Day; some of the throng stayed afterward to clean up. Amanda said Jacob was supposed to be part of that crew, which didn't leave the area until August 8.

Because of that, no one panicked when Jacob failed to check in a week or two after the gathering. "I didn't even know he went," Amanda noted. "It was our mom who told me, and she said he was supposed to return in late July. That's when we started calling him and he wasn't answering — but he told us before he left that they weren't going to have service out there, because he was in the mountains."

Jacob had no history of going off the grid for long stretches at a time, his sister stressed: "He wasn't the type of person to do that, because he wouldn't have wanted us to worry. And he made plans to go hiking with my brother, who lives in North Carolina, in early to mid-August."

A photo of a past Rainbow Family gathering shared by the U.S. Forest Service in a presentation about planning for the 2022 event.
U.S. Forest Service
When Jacob didn't surface in early August, Amanda found Annual Rainbow Family Gathering of the Tribes, an active and sizable Facebook group that lists more than 27,000 members. On August 4, she posted: "I'm looking for my brother who was at the gathering in Colorado. Nobody in my family has been able to get a hold of him, his name is Jacob Cyr. Can anyone help?"

Members of the community responded, including a woman who said that Jacob's phone and wallet had turned up among lost-and-found belongings during the cleanup. "She also said Jacob wanted to go hiking in the mountains and she told him not to, but he went anyway," Amanda recounted.

Armed with this information, Amanda contacted the Routt County Sheriff's Office on August 8 and provided staffers with the woman's best guess about where Jacob had planned to hike. Three days later, according to Undersheriff Doug Scherar, "Routt County Search and Rescue went out with the sheriff's office drone pilot. They searched about 1,000 acres via drone and then took the footage back to Search and Rescue and analyzed it on their high-definition TV to narrow down an area for a foot search. They went back out on August 13 with volunteers and dogs to search a more precise, approximately 300-acres area. But no clues were found."

That changed the next month. An RCSO news release issued on September 6 noted that two days earlier, "a skull was found on Sunday by a hunter, north of Adams Park, in northwest Routt County. Members of the Routt County Sheriff's Office and the Routt County Coroner did an immediate search of the area and could not find any other remains."

But the crew didn't stop there. A follow-up bulletin noted that "on Friday September 9, Routt County Sheriff’s Office Detectives responded with Routt County Search and Rescue to the Adams Park area to continue searching for additional remains in the area.... They were accompanied by three dog teams from out of the area. Dog teams located more skeletal human remains in an area approximately one mile from where the skull was recovered. The remains were collected by the Routt County Coroner."

Last week, the coroner's office definitively linked Cyr to the remains by way of dental records and consultations with a forensic anthropologist and a pathologist. According to the update, the cause and manner of Cyr's death are listed as "undetermined."

After the definitive news came down, Amanda St. Cyr added a note to the Rainbow Family Memorial Facebook page that concludes, "RIP, sweet Rainbow brother." Other friends have shared their thoughts, too.

"Tonight as I lay down to rest, I will pray for my sweet friend Jacob Cyr, as I have been for quite some time now," one wrote. "But this time I will pray he is resting easy up in heaven. I will always think of you when the Grateful Dead plays and Jerry hits that amazing solo you loved so very much. I will miss your million daily hugs with your hair all up in my face. I will always remember to never say the lord's name in vain.... Your spunky character and love for the world was amazing. May you rest easy up there and be at peace. Flying high above the Colorado mountains forever."

A GoFundMe page is raising money for Cyr's funeral. Click for more details.