The session began at around 4:30 p.m. on November 14 and didn't conclude until 1:40 a.m. today, November 15. Over the course of more than seven hours, dozens upon dozens of DPS parents took turns alternately defending their children's institutions and tearing into the board over a process they found to be consistently frustrating and frequently incomprehensible.

Among the harshest critics was Victoria Gannon, who spoke on behalf of Whittier ECE-8, a school on DPS's original list of ten schools marked for shutdown; the roster was halved last week, but a district news release stressed that Whittier and the four other schools that were temporarily spared "are still under consideration [for closure] and will continue to be supported as we more closely engage with those respective communities."

"The level of disrespect felt and distrust created by the short timeline, the lack of transparency in the selection process and the complete disregard for the support needed for our school communities during these proceedings is both disheartening and disingenuous," Gannon said. "It seems that the approach of this district towards its engagement with this community on this proposed plan is to assume that we are either illiterate or ignorant until we prove otherwise via Google Form submission to you, and worse, that it is not worth the time and effort for you to treat us with the most basic level of common courtesy and respect."

School closures have been teased for months, but the plan to shutter International Academy of Denver at Harrington, Palmer Elementary, Math Science Leadership Academy, Schmitt Elementary, Columbian, Eagleton Elementary, Fairview Elementary, Colfax Elementary, Denver Discovery School and Whittier wasn't publicly presented until November 3. The 51-page document summarizing it presents reams of facts and figures related to slowing growth in metro Denver, a phenomenon that has resulted in a declining birth rate. The conditions for school unification listed in the plan include the following:

Not every member of the board backed the closures. During a community meeting at Brother Jeff's Cultural Center on November 7, board vice president Auon'tai M. Anderson and treasurer Scott Esserman announced that they couldn't vote for the unification plan in its current form. 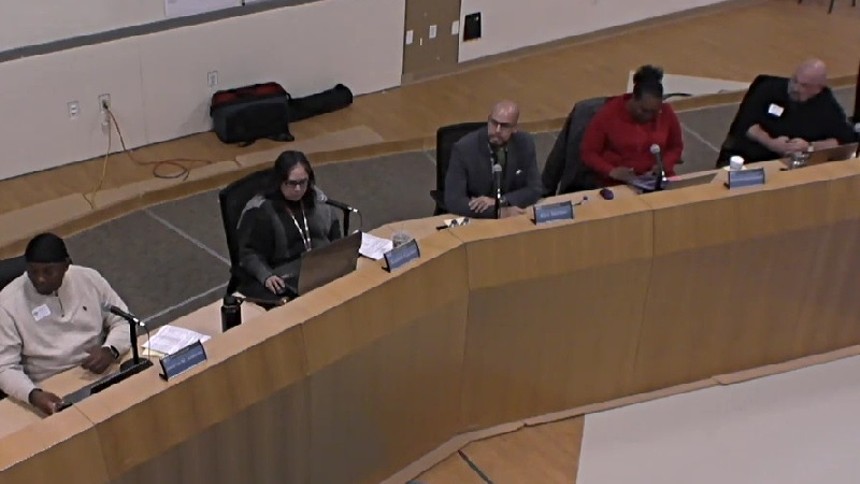 DPS superintendent Dr. Alex Marrero, third from left, and members of the board during the meeting.
Denver Public Schools via Vimeo
Three days later, on November 10, DPS stated that it would prioritize the closure of "five schools that have received the largest budget assistance": Denver Discovery School, Schmitt Elementary, Fairview Elementary, International Academy of Denver at Harrington and Math and Science Leadership Academy. According to the district, these five account for more than two-thirds of the nearly $5 million in subsidies it's been paying annually to keep the ten schools on the original list afloat.

This shift didn't placate Anderson, who confirmed at last night's meeting that he continues to oppose the closures.

In the meantime, supporters of the schools on the chopping block began speaking out to protest the approach — although few have been as organized as Gannon and company. They've created a website, Save Whittier ECE-8, that's brimming with statistics intended to show that the school remains viable; in her remarks at the meeting, Gannon stressed, "We believe in presenting data to the public about this decision." In addition, the group has launched a Change.org petition that has collected 365 signatures at this writing.

Gannon acknowledged that she appreciates "the difficult position the district faces in its fiscal responsibility." However, she added, "I believe that affected schools on the schools closure list, whether my school is on that list anymore or not, need and deserve more data, transparency and time to understand the proposal, as well as time to engage with you and the district representation on the myriad other options available."

Based on what she referred to as "the current quality level of engagement from DPS," Gannon went on, "it is clear that this plan is neither well-formed nor fully understood even by those proposing it. And if it is, DPS has put little to no effort in engagement and communication with the community to help us understand it fully," including why "schools with the same or lower [enrollment] levels of those slated for closure have not been included in this plan."

According to Gannon, "This is the behavior that our district leadership is modeling for our children, and if you think they don't see it and feel it, you are wrong. It is the school board's responsibility to manage a school-closure process that is carried out in partnership with the community. This current process is not a partnership."

The DPS board is slated to vote on the closures at its next meeting, on Thursday, November 17. Here's the complete video of last night's meeting: