Ask a Stoner: Can Marijuana Help With Arthritis?

Westword
Dear Stoner: I think pot will help my grandfather’s arthritis. Is there a kind of pot product — flower, edible, whatever — you’d recommend?
Scott

Dear Scott: According to science, you’re probably right. A study by the University of Oxford showed that cannabis-based medicine administered orally helped reduce rheumatoid arthritis pain and disease activity for the large majority of those studied. Big surprise, right? But researchers from the National Academy of Sciences took it a step further and studied the effects of CBD (cannabidiol, the non-psychoactive part of cannabis) on cows and mice with arthritis, concluding that “the treatment effectively blocked progression of arthritis” in both animals, protecting the joints against further damage. So get your grandpa some CBD products.

If he likes to get high, then by all means, high-CBD flower will reduce his pain and help him fall asleep — but I think the best way to actively treat it would be with balms, oils or edibles. Ingesting CBD-infused edibles and oils or rubbing balms and topicals on arthritic joints should help ease the pain, and will also attack inflammation to prevent more damage. You can find all of those products at your neighborhood dispensary, but there are also a lot of CBD products made from hemp that you can try that are much less expensive. If Grandpa is a little skeptical, have him ease into it with CBD in pill or topical form first. 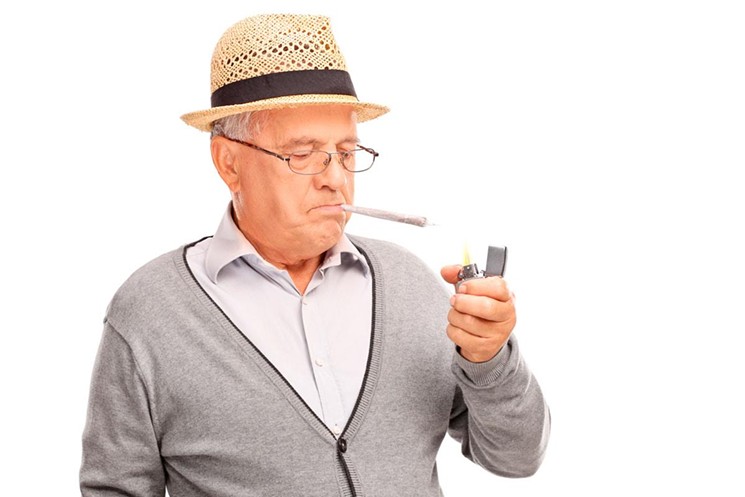 Shutterstock
Dear Stoner: My nephew just turned eighteen. Would it be so wrong if I gave him some Colorado cannabis? You know, the same way the French teach their kids to drink responsibly when they let them sip wine at the table when they’re six?
Sacre Bleu

Dear Sacre: I’m sure any answer I give is sure to piss somebody off, but I’d advise against it. Yes, I started smoking pot in high school, but still, sharing a joint isn’t the same as a sip of wine or drinking the neck of a beer bottle. Although I think cannabis should be regulated much as alcohol is, that doesn’t mean it’s the same. One hit of Colorado flower would have a rookie stoned off his gourd within minutes, but one sip of wine doesn’t do much. I wouldn’t want to be responsible for the former — just like I wouldn’t want to be responsible for getting a teenage family member drunk. There’s plenty of time to share nugs with your nephew three years from now.