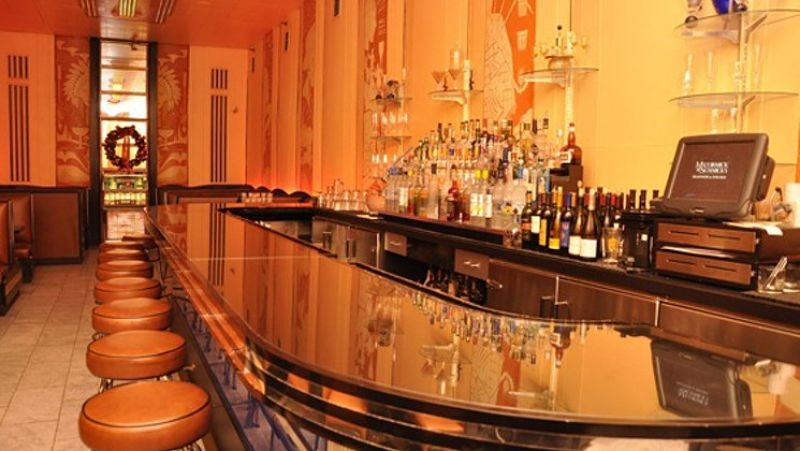 Westword
The Cruise Room in a rare, empty moment.
There was quite an impromptu party at the Cruise Room on the first Friday of the new year,  as fans of Denver's most famous watering hole grabbed seats in the booths, found stools at the bar, or just stood their ground on the marble floor, while the drinks flowed and music poured out of the free jukebox.

It was the first time in years that the jukebox had worked, said Walter Isenberg, co-founder and CEO of Sage Hospitality, which owns the circa 1891 Oxford Hotel that houses the Cruise Room — but had not controlled the Cruise Room until January 1, when the thirty-year lease on that space as well as the rooms occupied by McCormick & Schmick's finally ran out.

But Sage — both the hotel division and Sage Restaurant Group, which runs numerous restaurants in its hotels across the country, including Urban Farmer, which will be moving into the McCormick's space (and adding two big patios) — was ready. The group had already made plans for a kitchen crew to continue handling room service and banquets and other events in the ballroom, as well as the Cruise Room menu, tasks that had been included in the McCormick's contract.

"We were locked and loaded and ready for all of that," says Peter Karpinski, co-founder and COO of Sage Restaurant Group. "The team did a tremendous job."

And they were ready to see in the new year in style. "We're thrilled," Karpkinski adds. "The Cruise Room is a very special place with a tremendous amount of history. It opened the day after Prohibition was repealed, on December 5, 1933 [it might even have been running before it officially opened], and hasn't closed since."

The jukebox is back in business.
Westword
It won't close for so much as a day now, even as Sage does some renovation work. The physical changes won't be major, Karpinski notes; since the Cruise Room is on the National Register of Historic Places, there's only so much that can be done. The interior was designed by Gilbert Charles Jaka, who also created the observation lounge on the Queen Mary (hence the name); artist Alley Henson made the bas relief depictions of international drinking toasts on the wall (the ones dedicated to Hitler and Mussolini disappeared during World War II).

"The biggest way you'll feel the impact is in the vibe, the ambience," Karpinski explains.  After "Billion-Dollar Buyer" Tilman Fertitta purchased McCormick & Schmick's in 2012, acquiring the Cruise Room lease in the process, his company did an update in 2013 that put the servers in not-so-historic bustiers and proudly revamped the cocktail menu with a Miami feel.  But now the servers are back in black, there's a new drink list, and the free jukebox is again in business.

"We're going to get the party going there," Karpinski promises. In fact, the party started as the clock struck twelve, ringing in the new year and the start of Sage's jurisdiction over the Cruise Room. Isenberg, Karpinski and their crew gathered for a toast, and no drinks ever tasted better.

The cocktails on Friday came close, though. "Our goal is to really bring that space back to its former glory," concludes Karpinski, "and put it back in the spotlight as one of the most special, awesome bars in America, all the world."