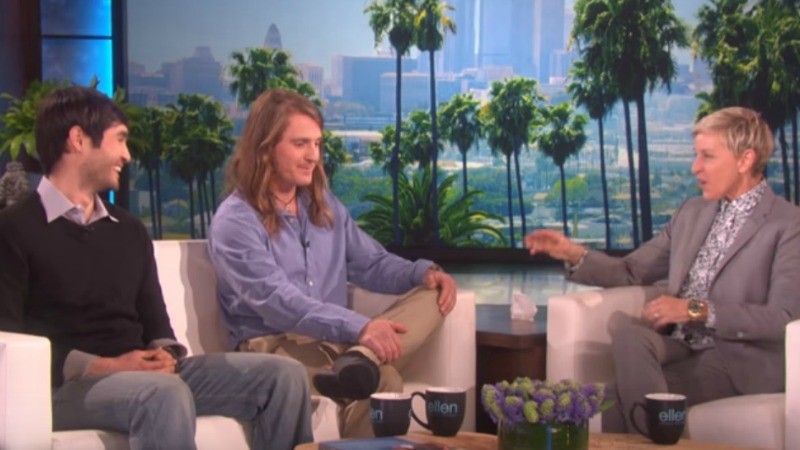 Ellen via YouTube
Mickey Wilson, center, and a man named Richard, left, tell Ellen DeGeneres about the Arapahoe Basin rescue. A video and more below.
The tragic death of San Antonio mom Kelly Huber after falling from a Granby ski lift with mechanical problems demonstrates that such devices aren't risk-free, as a skier named Richard found out personally. Earlier this month, his backpack got tangled on an Arapahoe Basin lift, leaving him dangling from the chair by his neck. He almost certainly would have died were it not for the heroics of professional slackliner Mickey Wilson, who joined Richard to talk about the rescue on yesterday's episode of The Ellen DeGeneres Show, as seen in the video below.

Richard, who has chosen not to be identified by his last name, admitted that his memory of what happened is spotty.

"All of a sudden, I just remember that my vision was constricted, and that's all that I remember of it," he said. "I passed out."

Wilson, who had just met Richard, was with some of the skier's friends on the chair behind him when near-disaster struck.

As Richard was being strangled, Wilson realized that he might not survive until members of the ski patrol could arrive — so he took action himself. "I just get on the cable and I slide across it really fast, as fast as I can...butt-scooting, basically," he told DeGeneres.

"I swing down onto the chairlift, but I realize I don't have my knife," he continued. "I usually carry a knife in most outdoor situations. It's a good thing to have. And right at that moment, the ski patrol had arrived. And the ski patrolman down at the bottom made the world's most perfect toss twenty feet up. I have a hurt hand, and I catch it with my hurt hand, which is a miracle, too, pull the blade out, cut him loose, and eight ski patrolmen or something do CPR on him."

At that point of the account, the two men fist-bumped.

Their reward for sharing this crazy story on national television? They each received a seven-night stay for two in Hawaii — where they won't need to worry about any ski-lift problems.