YouTube
Vance Joseph at the press conference announcing him as new coach of the Denver Broncos.
In our coverage earlier this week of revelations about past sexual-assault accusations against new Broncos coach Vance Joseph, which were originally made public as part of the investigation into the CU recruiting scandal, we noted that the team would apparently try to "ride out" the negative publicity that might result from the incident, which dated back to the period when Joseph served as an assistant coach for the Buffs.

But that just became more difficult. Deadspin has now published the original police report from May 2004 in the context of a story that appeared under the label "New Broncos Coach Vance Joseph Left University of Colorado After Being Accused of Rubbing His Erect Penis on a Woman."

The details in the report, shared below in its entirety (but with the names of the alleged victims redacted), are, if anything, more damaging than that headline.

According to the document, the woman in question — a CU graduate who'd worked at the Dal Ward Athletic Center — had gone with a friend to the Foundry, a now-defunct venue at 1109 Walnut in Boulder. There they'd run into Joseph, an assistant football coach at CU whom they knew as "VJ."

The woman said she and Joseph had been social in the past, but only in group settings. Neither she nor her friend had dated him in the past. 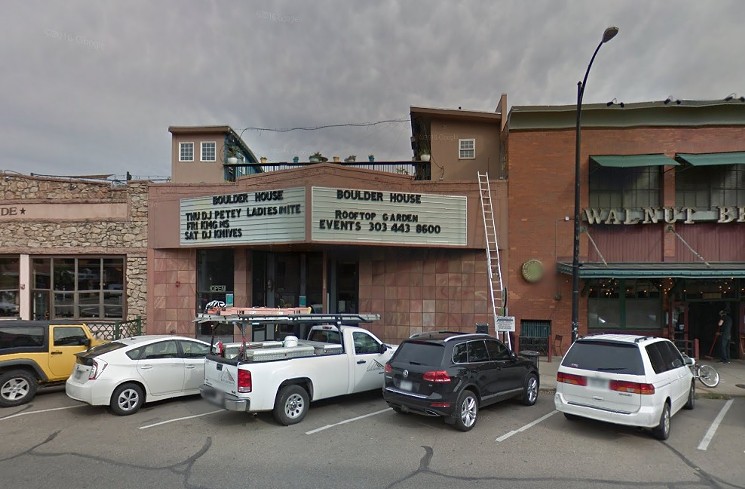 1109 Walnut, the location of the former Foundry, where Joseph is said to have met the two trainers.
Google Maps
At the Foundry, Joseph bought them a couple of drinks, after which he accompanied them back to the residence of one woman. They drank and smoked pot before one of the women went to bed "because she was tired," the report says.

The next thing she knew, the account continues, "VJ was in the room, took all his clothes off and climbed into bed with her."

The woman said that "VJ began touching her all over with his hands and rubbed his body against her," the narrative reads. "She told us that she felt his penis against the backside of her body and that it was hard. VJ continued grabbing her breasts and rubbing up and down her leg for a short period of time."

Rather than revealing that she was awake, the woman told investigators that she pretended to be passed out "and did not respond to what VJ was doing. She said that VJ eventually stopped, got out of the bed and left the bedroom. She said that he did not penetrate her at all during this incident."

After Joseph left, the woman spoke to her friend and, the report quotes the latter as saying that "VJ had done the same things to her." The second woman told him to "get the hell out."

Vance Joseph's portrait while an assistant coach at CU Boulder.
University of Colorado Boulder
Joseph did so, and "none of them ever discussed what had happened and that they would say hello to each other, but never socialized again," the document states.

The first woman described Joseph as a "sleaze ball" in the report, but "felt like she was fine and could handle it herself. She thinks he should lose his job for what he did and is happy with the outcome of the sexual harassment investigation being conducted by CU. [Redacted] said that she and [redacted] are not the only women that VJ was getting in trouble for."

The first time the incident was directly connected with Joseph during the recruiting-scandal investigation came amid testimony by former CU president Elizabeth "Betsy" Hoffman. An excerpt from her testimony is below, along with the police report, about which Joseph hasn't publicly commented since being named Broncos coach. It will be interesting to see how much longer he'll be able to remain silent.

Via Deadspin
...and here's the police report: