Photo Illustration From Shutterstock Images
Bowing to pressure from community groups and fossil lovers, Jefferson County's Board of County Commissioners voted last night against a proposed rezoning that would have placed up to four auto dealerships in close proximity to the most significant dinosaur track site in the country.

The decision deals with the northwest quarter of a 140-acre proposed development straddling all four corners of the Alameda/C-470 interchange. The forty-acre northwest parcel is little more than half a mile from the track site on Dinosaur Ridge and surrounds the current visitor center operated by the Friends of Dinosaur Ridge. The developer, Three Dinos LLC, has characterized the rezoning request as a "minor change" in land use for property that's been zoned for commercial development for nearly a decade.

But as detailed in our January 12 cover story, "Jurassic Parking Lot," neighbors and supporters of Dinosaur Ridge have raised several concerns about the impacts the development would have on adjoining open-space land, on wildlife, on nearby hiking and biking trails, and on one of the last scenic vistas in the Rooney Valley. Some have questioned the process by which the property was rezoned years ago and whether past and current county commissioners have conflicts of interest because of ties to the developer — including the tens of thousands of dollars in campaign donations made to various county officials by Three Dinos principal Greg Stevinson, developer of the Denver West office park and Colorado Mills shopping center. 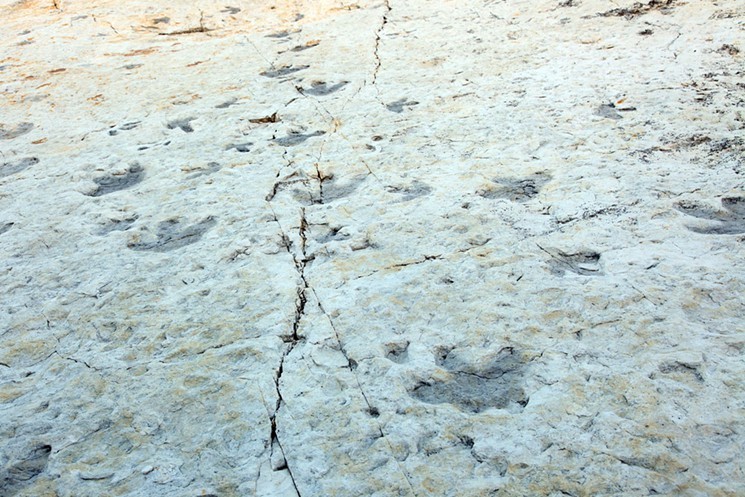 Dinosaur Ridge, the most significant dinosaur track site in the United States, was discovered in the 1930s by workers building the Alameda Parkway over the hogback.
Photo by Anthony Camera
At yesterday's marathon hearing — seven hours of testimony, followed by several more hours of discussion — Stevinson and other members of the Three Dinos team detailed how the development would generate jobs and tax revenues for the county. The rezoning would have allowed up to four car dealerships as well as hotels on the northwest parcel, and Three Dinos had pledged to provide up to $700,000 toward relocating the Dinosaur Ridge visitor center, as well as a land swap to provide additional parking for the center.

But a long procession of nearby residents, Dino Ridge visitors and open space advocates expressed dismay or outrage over the proposed dealerships and height variances, urging the commissioners to reject the rezoning and explore other solutions, ranging from a county-initiated undoing of the 2007 rezoning to some kind of proposed swap of the entire northwest parcel — for example, preserving it as open space in exchange for forgiving a $6 million loan the county made to an entity formed by Stevinson and other Three Dinos principals that was used to build the Alameda interchange and has not yet been repaid.

Emily Mitcham noted that the metro area already has at least 87 car dealerships. "It makes no sense to take such an extraordinary place and zone it for the ordinary," she said.

Eric Brown, president of the grassroots group Dinosaur Ridge Neighbors, blamed prior county commissioners for the 2007 rezoning of the property from agricultural land to commercial use that ignored planning-board recommendations and land-use plans. Responding to Stevinson's contention that the idea of saving a "pastoral, visionary gateway" in the area was unrealistic — "that horse left the barn a long, long time ago," the developer told Westword — Brown quipped, "The people who were supposed to be watching the barn opened the door and smacked the horse on the ass." 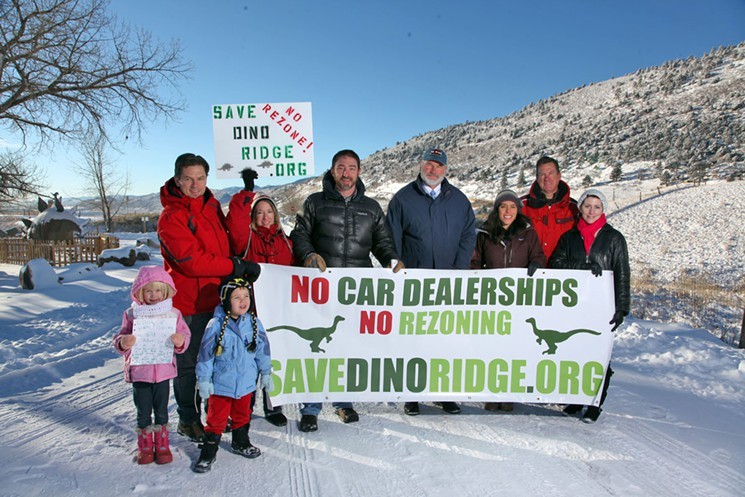 Dinosaur Ridge Neighbors, a group opposed to the rezoning at the interchange, turned out in force at last month's Jefferson County planning commission hearing.
Photo by Anthony Camera
The three county commissioners seemed to be leaning toward the dealerships, in part because the rezoning came with certain restrictions on lighting, traffic and other impacts, as well as the promised financial aid for the Friends of Dinosaur Ridge, that seemed preferable to some of the uses the land is currently zoned for. Stevinson had indicated that without the rezoning, the company could turn to big-box retail, fast-food outlets and other developments at the interchange.

But after listening to numerous public comments decrying the dealerships, commissioner Casey Tighe made a motion to reject the rezoning request. Commissioner Libby Szabo then proposed approving hotels and gas stations on the parcel but not dealerships, a proposal that Tighe supported. The third member of the board, Don Rosier, noted that the dealerships were supposed to anchor the development and voted against Szabo's motion. "Now we're back to square one," he complained.

An attorney for Three Dinos indicated that the company would withdraw its rezoning request rather than agree to approval of only some of the uses that had been sought.