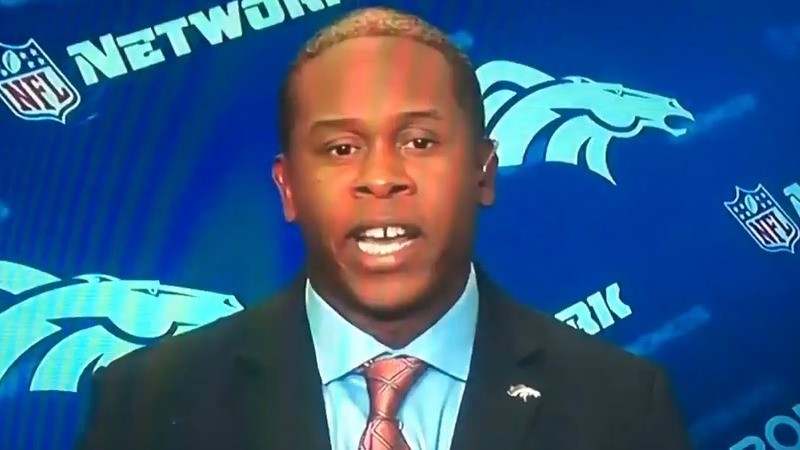 NFL Network via YouTube
Vance Joseph shortly after accepting the job as head coach of the Denver Broncos. Additional photos below.
Yesterday, we shared disturbing new details about past sexual assault accusations made against new Denver Broncos head coach Vance Joseph, including an assertion by a woman who told police in 2004 that Joseph, then an assistant coach at the University of Colorado Boulder, had disrobed, climbed into her bed uninvited and pressed his erect penis against her. Our piece noted that Joseph had not yet publicly addressed the allegations, adding, "It will be interesting to see how much longer he'll be able to remain silent."

Turns out Joseph's lips stayed zipped on the topic for less than 24 hours longer. But rather than holding a press conference or speaking on video, Joseph chose an interview with the Denver Post's Nicki Jhabvala. The result was a clever bit of spin control, albeit one that hardly lays the story to rest permanently.

The original police report about Joseph can be accessed below. As we've reported, the narrative features a police interview with a female CU graduate who'd worked at the Dal Ward Athletic Center. On an evening in 2003, she told investigators, she and a friend had visited the Foundry, a now-defunct venue at 1109 Walnut in Boulder. There they ran into Joseph, an assistant football coach at CU whom they knew as "VJ."

The woman said she and Joseph had been social in the past, but only in group settings. Neither she nor her friend had ever dated him.

At the Foundry, Joseph bought them a couple of drinks, after which he accompanied them back to the residence of one woman. They drank and smoked pot before one of the women went to bed "because she was tired," the report says.

The next thing she knew, the account continues, "VJ was in the room, took all his clothes off and climbed into bed with her."

The woman said that "VJ began touching her all over with his hands and rubbed his body against her," the narrative reads. "She told us that she felt his penis against the backside of her body and that it was hard. VJ continued grabbing her breasts and rubbing up and down her leg for a short period of time."

Rather than revealing that she was awake, the woman told investigators that she pretended to be passed out "and did not respond to what VJ was doing. She said that VJ eventually stopped, got out of the bed and left the bedroom. She said that he did not penetrate her at all during this incident."

Joseph's official CU Boulder portrait during his days as an assistant coach.
University of Colorado Boulder
After Joseph left, the woman spoke to her friend; the report quotes the latter as saying that "VJ had done the same things to her." The second woman had told him to "get the hell out."

Joseph did so, and "none of them ever discussed what had happened and that they would say hello to each other, but never socialized again," the document states.

The first woman described Joseph as a "sleaze ball" in the report, but "felt like she was fine and could handle it herself. She thinks he should lose his job for what he did and is happy with the outcome of the sexual harassment investigation being conducted by CU. [Redacted] said that she and [redacted] are not the only women that VJ was getting in trouble for."

The accusations were made public in 2005 after the leak of a grand jury report regarding what was popularly known as the CU recruiting scandal. In a deposition, former CU president Elizabeth "Betsy" Hoffman said, "He — we are investigating a — two incidents with Mr. Joseph, one of which was having sex with a trainer in the steam room and the other was picking up two trainers at a bar and taking them home with him. We have no reason to believe that it was not consensual, but since he is a coach, we consider that it was probable or possible sexual harassment, so we followed our sexual harassment protocols. We suspended him pending the investigation, which the investigation, I believe, is still ongoing. But he since took another job."

Indeed, Joseph moved on to become a defensive backs coach at Bowling Green in 2004, after which he was hired in a similar role by the San Francisco 49ers. He subsequently coached for the Houston Texans, Cincinnati Bengals and Miami Dolphins before landing the Broncos gig.

Shortly after Joseph was introduced to the Denver media, word of the sexual-assault accusation surfaced, with the Boulder Daily Camera offering a damning, if somewhat sanitized, version of the police report. However, Deadspin pulled no punches, publishing the police report under a headline that read, "New Broncos Coach Vance Joseph Left University of Colorado After Being Accused of Rubbing His Erect Penis on a Woman."

With the likelihood of more news organizations digging into the story, the Broncos could no longer get away with simply deflecting the story; its initial statement read in part, "While we were aware of these accusations, he was not charged with anything from the report filed in 2004." But the team needed to limit the damage and control the environment, which it did by turning to Jhabvala, the reporter to whom Broncos linebacker Brandon Marshall told his controversial and much-dissected tale of being detained and handcuffed by Miami police officers last year. (Critics initially accused Marshall of concocting the scenario, and while the Miami Police Department subsequently confirmed some parts of the account, there were discrepancies.)

A Vance Joseph photo-graphic from the Denver Broncos' Facebook page.
Facebook
The optics of this decision appear to have been carefully considered. By speaking with a female reporter, Joseph appears to be sensitive to the offenses of which he'd been accused. Moreover, the conversation wasn't captured on video, meaning that it couldn't be endlessly replayed — yet he'll now be able to say that he's dealt with the issue if he's ever questioned about it again.

As for what Joseph said to Jhabvala in the surprisingly short piece, some of it is contradictory. He called the accusations "false" while at the same time hinting at a certain level of culpability. "That was resolved a long time ago,” he's quoted as saying. "For myself, for my family, for the Denver Broncos, I’m disappointed and embarrassed. I was a young guy and it showed to my immaturity and irresponsibility in my life when I was younger. But I’ve grown so much, and that’s why I’m disappointed, because I’ve grown so much as a person, as a coach, as a father, as a husband.

"Everyone who knows me knows that I try to live my life the right way, and I regret that my name is even associated with this," he added.

Is Joseph trying to imply that some of what the women say is true, but that he doesn't believe he committed a crime? That's unclear. But if Jhabvala pressed him on this point, the results aren't in the Post article.

Expect Joseph to stay mum on the subject from here on out — and this tactic could prove successful. Last February, Peyton Manning got some unwanted publicity via a lawsuit filed against the University of Tennessee that used an alleged offense by Manning against Dr. Jamie Naughright, then Director of Health & Wellness for the Men's Athletic Program, as an example of a Tennessee "culture that enables sexual assault by athletes." He was accused of having "placed his 'naked butt and rectum' on her face," then bullying her in later years over an account of the controversy that appeared in a book he wrote. But Manning laid low and the bad PR went away; he's now back to pitching Papa John's pizza and plenty of other products, his down-home persona intact.

Of course, Manning was a college student when the Naughright matter took place. Joseph, in contrast, was an adult coach — and the woman who spoke with Boulder police in 2004 said that she and her friend "are not the only women that VJ was getting in trouble for." Should these women or others start speaking out, Joseph may not be able to deflect questions about his behavior a decade-plus before joining the Denver Broncos.

Look below to see a Facebook video of Broncos general manager John Elway describing why he hired Joseph, followed by the police report.