Thinkstock file photo
If you're mentally ill and, say, undergo a crisis that causes a disruption at a public place in Colorado, you can be legally put in jail for 24 hours, even if you haven't committed a crime. Moreover, an attempt to change this rule last year was driven by law enforcers who wanted the hold time for innocent sufferers to be extended, not eliminated.

A task force assembled at the behest of Governor John Hickenlooper came to a very different conclusion. In a report on view below, the group called for so-called M-1 holds to end and provided some suggestion for how to make that happen.

Still, Denise Maes, public policy director for the ACLU of Colorado and a member of the task force, acknowledges that accomplishing these goals will be a challenge.

"We came up with a pretty long list of things that can be done in lieu of jails," Maes says. "The question is, where is the financing coming from? And that's what's so frustrating. The ACLU's position is, you can't put someone in jail who hasn't committed a crime. That's easy — although it actually isn't so easy, because the next thing people ask is: Then what? But sorry, State of Colorado. The 'then what' is, 'They can't go to jail, and you're going to have to pay for it.'"

Most other places in America have come up with a way to deal with these issues. Indeed, Colorado is one of just six states that allow county jails to place individuals on M-1 holds. The others are New Mexico, North Dakota, South Dakota, Texas and Wyoming — and it's no surprise that all of these states are geographically large, with plenty of rural areas where any kind of health-care services are scarce, let alone ones that specialize in helping the mentally ill.

Here's a graphic from the report showing health-care facilities in Colorado by county. The locations in yellow don't have a single hospital, and the two in red have neither a hospital nor a rural clinic. 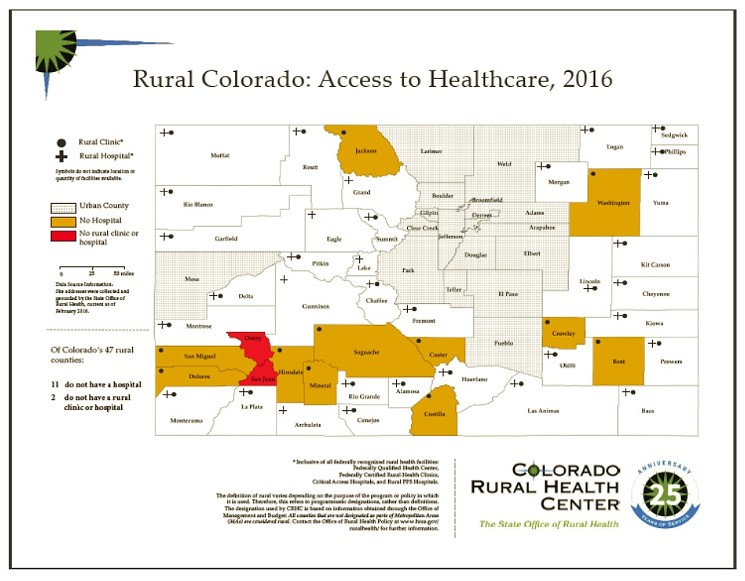 Colorado Department of Human Services
This scenario explains the approach taken to M-1 holds at the state legislature in 2016.

"What lawmakers were trying to do last year was to increase that right," Maes recalls. "Sheriffs were saying, 'Sometimes people need to stay longer than 24 hours, because there's no place to take them.'"

Legislators seemed game. But Maes notes that "when the opportunity to have more time in county jail was advanced in both chambers, Governor Hickenlooper vetoed that bill, in large part because folks in the mental-health community and the civil-rights community said, 'To keep someone in jail who hasn't committed a crime is a due-process issue.' And it's also a setup, because once you're in jail, you might be more likely to commit an actual crime — and then you'll be more likely to stay in jail longer."

At that point, Maes continues, "the governor said, 'We need to have an alternative to jails. So how do we fix this problem without the use of jails?' And that was the genesis of the task force."

Over the course of multiple sessions, task force members circled around the central issue before finally tackling it head-on.

Denise Maes.
File photo
"It wasn't until the very last meeting that we settled on no jail for people in a mental-health crisis who haven't committed a crime," Maes reveals. "And I think the reason it took us so long to get there is because this comes with a big price tag."

Below, see the list of eight main recommendations made by the task force....

...as well as a graphic that depicts a framework for addressing the problem.

Colorado Department of Human Services
There were no shortage of proposals for practical solutions among task force members.

"There was a lot of support for having more portable mental-health facilities that can actually go to you rather than you going to them," Maes points out. "They're already being used in some parts of Colorado, usually in areas that are more metro than rural. And we also talked about having the opportunity to visit with a mental-health expert via Skype. There might not be a mental-health professional at a rural hospital, but they might be able to hook you up with one somewhere else."

The task force's emphasis, she goes on, "was definitely on what I thought were innovative approaches, and not just to throw a whole bunch of money around to create extra beds" — especially since the scope of the problem is so unclear. In her words, "it was difficult getting data on how many times this happens. The jails don't track that, so there's no way for them to say how many people are really affected. There could be a few or there could be a lot — hundreds every year. So we're hoping jails will track this more closely, so there'll be a better way to inform policy makers how much this really costs."

Right now, those officials seem reluctant to take the task force's advice. Maes is hoping that a legislator will run a bill to get rid of M-1 holds during the ongoing term, but thus far, no one has introduced such a measure. She feels that inaction isn't an option.

"There is no interim situation here," she says. "This needs to be addressed now."