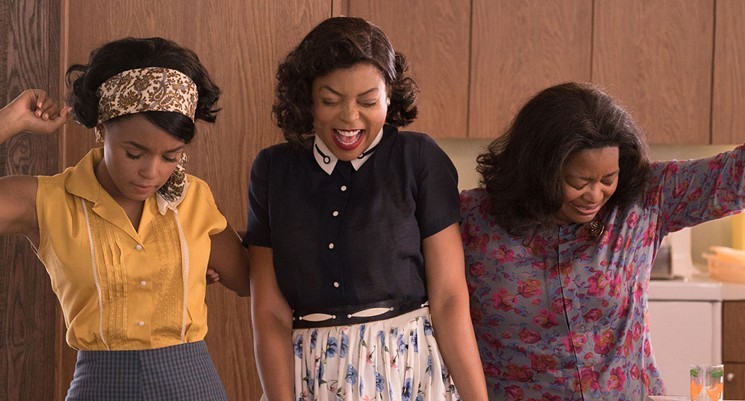 Courtesy of 20th Century Fox
In a dimly lit theater at the Alamo Drafthouse in Littleton, 75 girls in elementary through high school are chitchatting, placing their food orders with theater waiters and patiently awaiting the start of the film. Directed by Theodore Melfi, Hidden Figures tells the true but seldom-heard story of three African American women who were instrumental in sending Americans into orbit in the ’60s.

It’s not exactly a kids' movie, but the message behind it is important for the young women in the audience, says Sonya Garcia Ulibarri, executive director of Girls Inc. of Metro Denver, a nonprofit that aims to empower young women and expose them to science, technology, engineering and math (STEM) fields. Girls Inc. partnered with Lockheed Martin, a giant in aerospace, defense, energy and space technology, to host the screening on Tuesday, January 24.

“Understanding and being able to tell stories about women who are really influential in space exploration, engineering and other fields like that, I think, provides a real motivating opportunity for girls to know that they’re building off of what other women are able to do,” Garcia Ulibarri says. “If those women are able to do it, they are, too.”

Girls and boys in K-12 grades in the U.S. test about the same in math and science, but because of a lack of confidence in their abilities, girls are less likely to pursue advanced courses in those subjects, according to a report from the National Girls Collaborative Project, which aims to diversify the STEM fields. Women are significantly less likely to pursue STEM degrees in college than men, and make up only about 25 percent of the STEM workforce.

The numbers get even more dire for women of color.

“Women [get] about 25 percent of STEM degrees coming out of college,” Garcia Ulibarri says. “That number drops to the single digits for women of color.”

To combat these statistics, Denver Public Schools launched SmartLab, programs for K-8 students that teach STEM subjects through hands-on learning. About 10,000 students are enrolled in the 36 SmartLabs across Denver, but the program is too young to have statistics on the race and gender of its participants, says DPS spokeswoman Alexandra Renteria. The 6,000 students in the district's high-school STEM program, DPS CareerConnect, get career-ready by engaging with STEM-focused companies and colleges. The highest number of participants in CareerConnect, about 56 percent, are of Hispanic descent, and 42 percent of its enrollees are female.

In the audience at the Alamo is Luqie, an eighth-grader at a creative-arts-focused school in Denver. Luqie, who has on cat ears and has drawn whiskers on her face, is interested in video-game programming and dreams of one day working for Microsoft, maker of the Xbox.

“I think that’d be amazing, because you don’t see any of the women’s names of who created [the Xbox] that much,” she says. “They helped in the design process, but I want to do the hard-core stuff.”

Standing next to her is Ariyah, a friend who’s also a member of Girls Inc. Ariyah, Luqie and some other friends were part of a team that last year participated in a LEGO-building competition in Denver called First LEGO League. Their mission: Build a robot of LEGOs and program it to complete certain tasks.

“There were barely any girls at the competition,” Ariyah says. “Girls think that, ‘Oh, well, I’m a girl, I shouldn’t know about that kind of stuff.'”

But Luqie and Ariyah are hopeful. They see their generation as the first that will exist without the gender constraints that have hung over others.

“This whole generation is so different,” Ariyah says. “We get to do stuff others didn’t.”