Oatey uses an unusual method: He draws on paper with a sheet of carbon paper underneath so that the carbon transfers marks onto the bottom paper. Since he often reuses the carbon paper, marks from previous drawings can be seen in the later ones — not by their presence, but by their absence, taking the form of subtle skips in the lines. Four of the pieces here respond to tides, four to corduroy, but all comprise loosely done linear patterns. They are very quiet in appearance, particularly next to the loud visual effects conjured up by Gebbia-Richards. 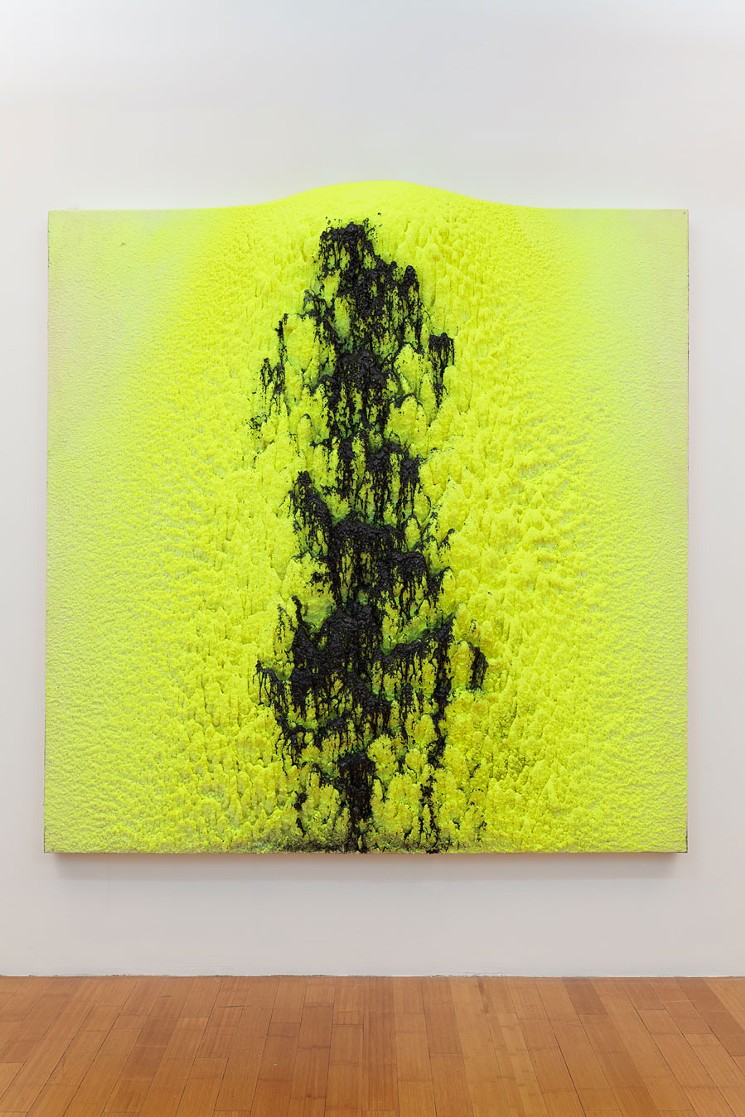 “Fall From Grace,” by Dylan Gebbia-Richards, wax on panel.
Wes Magyar
The Gebbia-Richards paintings are large; the two biggest ones measure seven feet square. Gebbia-Richards also employs an unusual method: He applies colored waxes with an industrial blower, building up the wax in coats to form tiny repeated spires that come up high off the surfaces. In “In Night,” a lighter-colored passage descends into a darker ground that envelops it; the colors used are complex, with different shades appearing on different levels. More graphic is “Fall From Grace,” in which a splattered black shape rises through a light-colored ground. In many ways, these paintings recall abstract  expressionism, but Gebbia-Richards puts a new spin on the old style.

"This is," mixed media on record album cover; "E-stranger," mixed media on record album cover; "Mr. and Mrs. Manyheads," bronze containing the remnants of ceramic mugs; "Burning Bush (E-thou)," mixed media on Penthouse poster. All by Donald Fodness.
Wes Magyar
Donald Fodness: Duets, a separate show in the experimental space, displays a funky mashup of abstraction, surrealism, pop and kitsch. Several of the wall pieces involve altered ready-made images; Fodness adds to and subtracts from the original sources. He pushes the concept even further in his memorable small bronzes. For “Mr. and Mrs. Manyheads,” a pair of compact totems, Fodness has stacked found face mugs and cast them in bronze, then covered them in a gorgeous verdigris patina. It’s a clear example of his longstanding interest in merging lowbrow and highbrow aesthetics — and that merger works really well here.

"Winking Santa," by Donald Fodness, bronze.
Wes Magyar
Both shows run through February 18 at David B. Smith Gallery, 1543A Wazee Street; for more information, call 303-893-4234 or go to davidbsmithgallery.com.