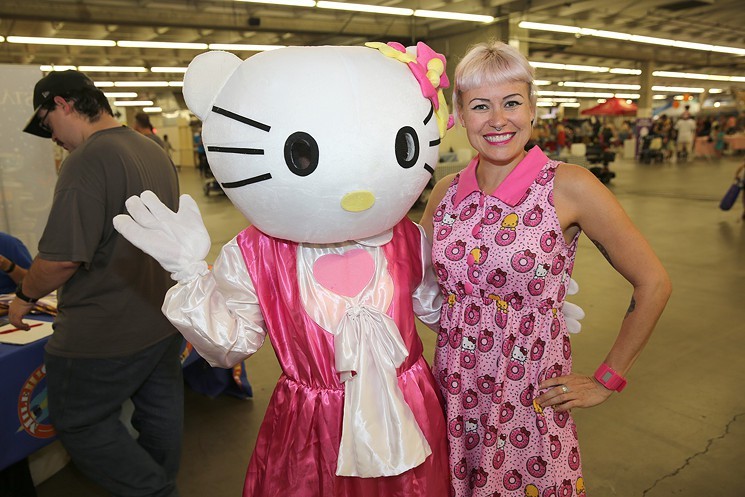 Aaron Thackeray
Hello, National Western Stock Show!
For years, nearly all of Colorado's 64 counties had county fairs — but not Denver County. That changed when artistic entrepreneurs Tracy Weil and Chandler Romeo cooked up the idea of creating a Denver County Fair

"These were invented to celebrate rural communities," said promoter Dana Cain, who joined the pair to present the inaugural county fair in Denver in 2011, at the National Western Complex, "but Denver has no rural. We are all urban. So, for instance, our rodeo won't involve animals. It will be done on skateboards and bicycles." Other activities included competitive baking, competitive eating, a craft show, an art show, a freak show and chickens, since backyard gardening and egg-gathering was about as rural as Denver got.

In the years since, with Cain and Weil at the helm the award-winning fair (three Best of Denver honors in a row) has grown into a city institution, one that bills itself as "mixing up a big batch of tradition with a side of NOW."

But this year, give added emphasis to tradition, because the National Western Stock Show is taking over the Denver County Fair. The official announcement isn't coming for a week or so, but NWSS head Paul Andrews let the cat (or is that Hello Kitty?) out of the bag at a dinner for Stock Show volunteers last night.

The NWSS is at the center of a $1.2 billion project to make the National Western Complex a year-round event area and economic generator for the city, so corralling the fair makes sense — and the annual extravaganza is a perfect place to celebrate rural as well as urban interests. But will the more novel attractions survive under NWSS stewardship? The controversial pot pavilion is already a thing of the past, but the pussy pavilion has proved a big hit.

"We created the Denver County Fair for the citizens of Denver to have fun and to showcase the best of the best when it comes to our great city. We're thrilled the National Western Stock Show will help realize this vision for our community," says Weil. "With their resources, guidance and deep roots in Denver, I know it's in good hands. They are committed to our city and the vibrant neighborhoods that surround the National Western. I look forward to seeing the event blossom."

The new owner of the Denver County Fair is already working on this year's event. “This opportunity presented itself and we jumped at it," says Andrews in an NWSS announcement sent out this afternoon. "With our full-time, professional staff, seasoned in event planning and operations, the Denver County Fair will have the knowledgeable support necessary to make Denver proud. We are in the process of formalizing our plans for the show and will announce enhancement in the coming months.”

Cain will be consulting with the NWSS on the fair. "It’s still my baby," she says. "It may have left home and gone off to college to grow up, but I’ll always love it and care about it more than anything!"

This year's Denver County Fair is set for August 4-6 at the National Western Complex. Find out more at denvercountyfair.org.