Anti-Topless Rule Stripped, All Nipples in Fort Collins Are Free

Facebook
An image from the national Free the Nipple Facebook page.
Update: Since 2015, an organization now called Free the Nipple Fort Collins has fought to remove the words "the breast or breasts of a female" from the community's public-indecency ordinance. Now, a federal judge has issued an injunction against the city over the rule on constitutional grounds, essentially killing it.

According to attorney David Lane, who represented plaintiffs Brittiany Hoagland and Samantha Six in the case, the order leaves Fort Collins "with two choices. They can probably try to prevent everyone from walking around bare-chested — and good luck with that. Or they can just let it go."

As we've reported, it's legal for women to be topless in numerous Colorado communities, including Denver, as evidenced by the hundreds who marched along the 16th Street Mall as part of Go Topless Denver Day this past summer.

Fort Collins chose a different path, prompting Hoagland's initial group, Go Topless Fort Collins, to lobby its city council to make a change. But in October 2015, the council left the prohibition against female toplessness in place for everyone other than breastfeeding mothers and girls ages ten and younger, prompting the launch of a lawsuit in June 2016.

After the suit's filing, Fort Collins asked U.S. District Judge R. Brooke Jackson to dismiss the complaint. But last October, Jackson allowed it to move forward on two of the three central claims — and while his decision didn't officially resolve the matter, Lane told us at the time that "the handwriting is on the wall. When the judge says, 'This statute is unconstitutional,' for whatever reason, that means this fight is basically over."

Of the three rationales presented by Lane to fight the Fort Collins ordinance, the one Jackson rejected was related to free speech.

"He said the First Amendment doesn't apply here because it's conduct-based," Lane said in our October post. "Now, conduct can be First Amendment-protected speech. But you have to have a particularized message you're putting out there, and these women have done that. But the other key, on a First Amendment conduct analysis, is that a viewer has to be able to readily understand what your message is conveying. For example, if you burn an American flag, a viewer would immediately understand, 'Oh, this is a protest against America.' So it's a particularized message that's very clearly understandable by the average person. A bunch of women going topless, they're putting out a message, but it's not a message that's readily understandable by the average person. Therefore, he said, the First Amendment doesn't apply." 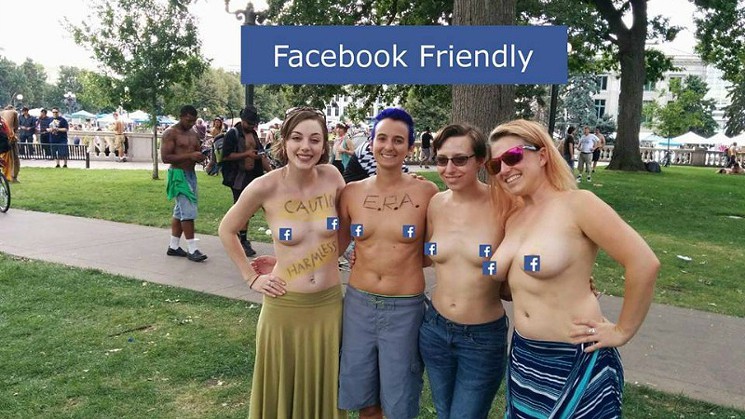 A photo shared on Facebook by Brittiany Hoagland, a plaintiff in the Free the Nipple lawsuit.
Facebook
Jackson confirmed Lane's interpretation in his injunction order. In one passage, the judge writes, "Throughout this case, Fort Collins has repeatedly pointed out that it is far from unique in enacting laws that criminalize females — and only females — who appear topless in public." After adding references to similar ordinances in Lincoln, Nebraska, and Albuquerque, New Mexico, he notes the city's argument that "striking down the law would upset many Fort Collins residents."

His response? "Unfortunately, our history is littered with many forms of discrimination, including discrimination against women. As the barriers have come down, one by one, some people were made uncomfortable. In our system, however, the Constitution prevails over popular sentiment."

The complete document is on view below.

Lane, speaking shortly after the order was made public, summarizes it thus: "The judge said that the Equal Protection Clause of the U.S. Constitution requires that men and women be treated equally. Fort Collins is one of the few jurisdictions anywhere that makes the distinction, saying that men can walk around bare-chested and women can't. But the judge shot down all the reasons Fort Collins was using to justify it."

Among the defenses, Lane continues, "was, 'Think of the children!' But the judge said, 'I think one of the first things children see when they're born are nipples — on breasts.'"

Stripping the rule from the books is unlikely to lead to swarms of women in Fort Collins uncovering their top halves on a regular basis, Lane believes. "In Denver and Boulder, women have the right to walk around with their breasts exposed," he says. "But I've worked in downtown Denver for thirty years, and I don't recall ever seeing a topless woman walking down the 16th Street Mall, even if they have a right to."

Apparently Lane was out of town on Go Topless Day. But either way, he maintains that "the world is likely not going to end, even in Fort Collins. In part, the sexualization of women's bodies by men leads to statutes like this, but that's sexism. You can't just say that men are all hung up about women's breasts, so therefore women need to cover their breasts. Men just simply need to get over it."

The Free the Nipple judgment was the second win in a 24-hour period for Lane's law firm, Killmer, Lane & Newman, LLP. As our Chris Walker reported, another federal judge, William J. Martinez, ruled in favor of an expedited protest-permitting process at Denver International Airport after demonstrators against President Donald Trump's refugee ban were severely limited by Denver police officers.

In Lane's view, the results added up to "a good day for the citizens of Colorado."

Here's the Free the Nipple order.