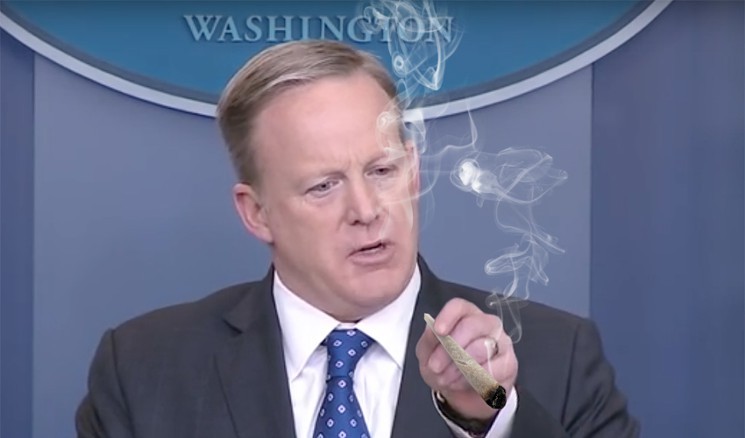 Westword
What was Sean Spicer smoking?
White House Press Secretary Sean Spicer tied the regulated marijuana industry to opioid addiction last week. At a press briefing, he told reporters: "I think that when you see something like the opioid addiction crisis blossoming in so many states around this country, the last thing that we should be doing is encouraging people.... There's still a federal law that we need to abide by when it comes to recreational marijuana and other drugs of that nature."

Opioid addiction is a well-documented epidemic in the United States; 33,000 people died from overdosing on prescription painkillers, heroin and similar drugs in 2015 — a number on par with those killed by firearms and those who died in car accidents in the same year. But opioid use is down in Colorado, the first state to legalize recreational marijuana.

Many both inside and outside the marijuana industry criticized Spicer for his comments; some took heart in the fact that a press secretary was in no position to set the feds on the states. But now the man who could has reiterated Spicer's comments.

Shutterstock
"Marijuana is a cure for opiate abuse? Give me a break," Sessions said. "This is the kind of argument that has been made out there. It's almost a desperate attempt to defend the harmlessness of marijuana or even its benefits. I doubt that's true. Maybe science will prove I'm wrong, but at this point in time, you and I have a responsibility to use our best judgment, that which we've learned over a period of years, and speak the truth as best we can."

And the truth is: Science has already proven him wrong.

While the federal government considers marijuana to be a Schedule 1 substance, which puts it in the same category as heroin, the evidence does not show that it's nearly as harmful or addictive.

Columbia University's Mailman School of Public Health conducted a study looking into fatal car accidents where opioids were present. It compared data in eighteen states over a period from 1999 to 2013 and found that states with medical marijuana laws saw a reduction in fatalities caused by drivers who were using opioids. The authors of the study concluded that "in states with medical marijuana laws, fewer individuals are using opioids."

In another study published in 2014, researchers found that annual overdose rates were nearly 25 percent lower in states with medical cannabis than those without them.

After results such as these, more and more advocates thought it might be possible to treat opioid addiction with medical cannabis. A study published by Health Affairs found that in states where Medicare Part D patients could substitute medicinal marijuana for prescription drugs, spending was reduced by $165.2 million per year from 2010 to 2013. "The availability of medical marijuana has a significant effect on prescribing patterns and spending," the study reported.

Although many have speculated that marijuana is a gateway drug and could lead to heavier substances, the science shows otherwise. In a study conducted by Thomas Jefferson University, 91 patients all fighting opiate addiction were given a variety of drugs to see which ones helped with their withdrawal symptoms. Those given cannabis rather than an opiate medication had the least amount of withdrawal symptoms, leading researchers to conclude that "cannabinoids may be useful medicine."

"Colorado is one of the only states in the nation that is seeing a decline in opioid deaths — that's not a coincidence," says Isaac Dietrich, CEO of MassRoots. "Cannabis is a healthy alternative to pain pills and heroin, not a gateway to it."