File photo
Rich Wyatt. Additional photos and more below.
Rich Wyatt, the star of American Guns, a once-popular Discovery Channel program that showcased him, his telegenic family, including wife Renee and kids Paige and Kurt, and his business, Wheat Ridge's Gunsmoke Guns, has been found guilty of conspiring to deal firearms without a license and multiple tax charges.

The verdict completes the fall of a once-prominent TV personality who rubbed shoulders with celebrities such as rock star Ted Nugent and even a former President of the United States, George W. Bush.

Here's the Discovery Channel description of American Guns for the launch of the show's second season, from our previous coverage:


The Wyatts are your typical suburban family who just happened to own one of the premiere firearms facilities in the world. Rich Wyatt and his wife Renee own Gunsmoke, located outside Denver, Colorado, where they buy, sell and trade guns — from hand cannons to hunting rifles. And if you don't see what you want, they'll build one for you — from nothing more than a block of metal. Gunsmoke has the largest and most experienced group of gunsmiths in the state. When the Wyatts aren't building or selling guns, they're shooting them. No gun leaves their shop without being test fired by the family first.

The Wyatt family in a promotional photo for American Guns: Rich with wife Renee and kids Paige and Kurt.
File photo
This premise was not especially controversial at the time the show was launched. But according to a Fox News report published in December 2012, American Guns' Facebook page was clobbered in the immediate aftermath of the massacre at Sandy Hook Elementary in Newtown, Connecticut. This post is an example:


"I know you all have to make money but would Discovery Channel PLEASE consider ceasing to broadcast the show in the U.K.? Sadly your program makes buying/owning guns seem fun, glamorous, even normal," wrote one. Another tweeted, "Dear Discovery Channel: it's not appropriate showing the program American Guns now!" Another weighed in: "With Discovery shows like 'Sons of Guns', 'American Guns', 'Ted Nugent's Gun Country' etc it's not surprising how guns r seen as acceptable."

Shortly thereafter, the Fox News piece goes on, Discovery announced that the show had been canceled and would not return for a third season — this despite a 50 percent ratings increase from season one's debut to the second-season launch and a statement from Renee Wyatt that a season three would definitely happen.

The downward spiral continued on February 27, 2013, when a thief or thieves broke into Gunsmoke Guns through a hole in the roof, spiriting away twelve handguns and three rifles. And the following week, the shop was briefly closed after IRS agents arrived, armed with a search warrant. 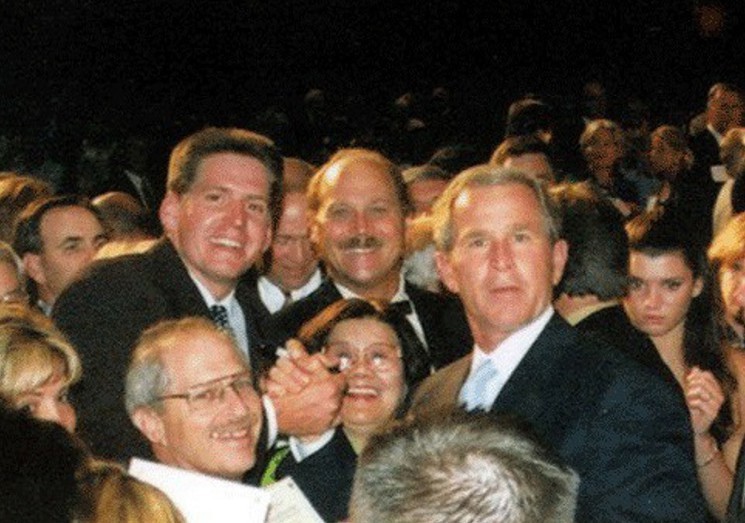 During his heyday, Rich Wyatt hobnobbed with the rich and famous, including former president George W. Bush.
File photo
In an affidavit for the warrant, on view below, the agent filing the document offered a straightforward statement: "I respectfully submit that there is probable cause to believe that for the period of January 1, 2006 to the present, the following items, which constitute evidence of the commission of, contraband, the fruits of crime, or instrumentalities of violations of Title 26...for tax years 2006, 2007, 2008, 2009, 2010 and 2011 will be found at the PREMISES."

The section of the affidavit devoted to evidence stated that in or around June 2010, an agent with the Bureau of Alcohol, Tobacco, Firearms and Explosives was given information suggesting that Wyatt "unlawfully possessed six...fully automatic weapons" in violation of U.S. law. This allegation caused agents to look more closely into the shop's records, figuratively transforming these weapons into smoking guns.

Shortly thereafter, agents discovered that while the Wyatts had long been thought to own Gunsmoke, a certain Victor Rodriguez was actually the man with his name on the paperwork, though Wyatt told investigators he "did not have a hand in day-to-day operations." Rodriguez later revealed that he'd purchased Gunsmoke from Wyatt in 2005 after Wyatt "went through a serious divorce." At the time, Rodriguez said the business wasn't profitable, but once it returned to the black, he'd agreed to sell it back to Wyatt.

Nonetheless, Wyatt's signature was on sales-tax returns for Gunsmoke for most months between January 2008 and October 2011, but not on individual tax returns from the years 2008, 2009 and 2010 — because he didn't submit any. He did file a 2011 form listing a loss from Gunsmoke of more than $98,000 — and presenting no other sources of income, despite the fact that the Discovery show was on the air at that time. The affidavit added that "neither Gunsmoke Inc. nor Gunsmoke Guns Inc. has ever filed Federal Income tax returns." 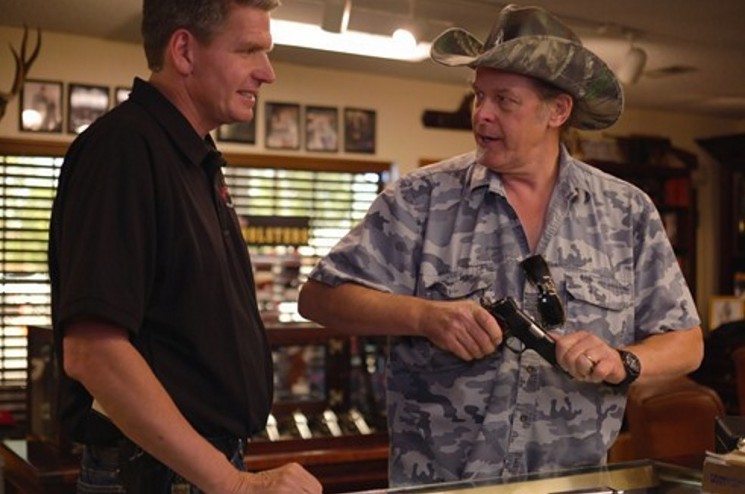 Rich Wyatt with Ted Nugent in a scene from "American Guns."
File photo
Another graphic showed what the agent believed was evidence of severe wage under-reporting. Over a five-year period, the highest-paid person on the staff was shown to be Matthew Meece, who brought home a whopping $13,157.15 in 2007. Reported income for Rich and his wife, Renee, was less than $10,000 cumulatively during that stretch. Yet somehow, in 2012, they were able to buy a house in Evergreen for $678,000, with Renee paying $278,000 of that herself. She's also said to have purchased two Florida condominiums for a total of $338,000 despite a reported adjusted gross income of $3,491 and $3,390 for the years 2008 and 2009, respectively.

That's not all. The affidavit, which is 35 pages long, listed plenty about a lavish lifestyle and fancy cars that didn't jibe with the comparatively tiny amounts of moolah the Wyatts reported to the IRS.

Despite this information, Gunsmoke remained in operation. But on March 31, 2015, IRS agents, accompanied by colleagues from the Bureau of Alcohol, Tobacco and Firearms, raided the shop again.

Shortly thereafter, the Wheat Ridge Police Department announced that Wyatt had been named on an arrest warrant for theft from an at-risk adult.

According to the WRPD, the victim in the case "had consigned a rare and antique gun collection with Wyatt in 2013," after which "repeated efforts by the victim at recovering several of the weapons had failed." However, a department release continued, "several of the stolen guns" were recovered by ATF agents during the most recent raid, described as having been prompted by "an unrelated, ongoing federal investigation." 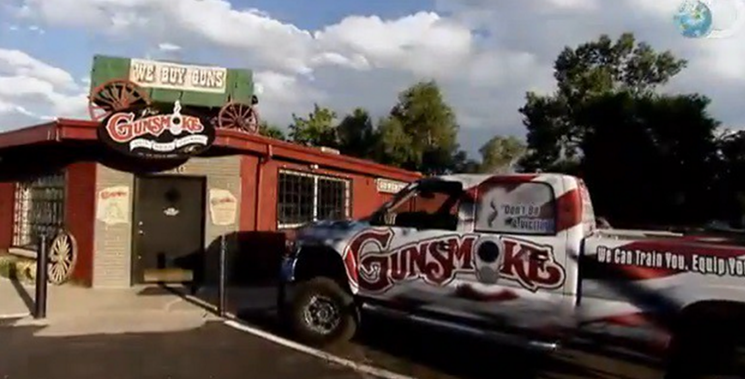 Gunsmoke Guns.
File photo
Wyatt turned himself in to the cops in Wheat Ridge on April 10, 2015, but the federal investigation continued — and in February 2016, it finally came to fruition, with a grand jury passing down indictments.

On February 17, 2012, the U.S. Attorney's Office maintained, "Wyatt conspired with others known to the grand jury but not named, to deal in firearms without a license." Wyatt surrendered his federal firearms license the following April, but he continued to operate Gunsmoke Guns.

How? "Wyatt directed Gunsmoke employees to enter firearm sales in Gunsmoke’s computer point-of-sale software system as 'miscellaneous' sales rather than firearm sales," prosecutors stated, adding, "After receiving payment for any firearms, Gunsmoke employees directed the customers to another firearm store which had a valid federal firearms license, where the customer filled out the background check paperwork and the customers took possession of the firearm(s) they had purchased at Gunsmoke."

Approximately a year later, Wyatt was placed on trial before U.S. District Court Marcia Krieger — but the case against him didn't turn out to be a slam dunk. The proceedings lasted six days, with the jury deliberating for five more before delivering a mixed verdict. Wyatt was found guilty of two conspiracy beefs and eight tax charges, with the jury unable to agree on three other tax counts. Sentences for the conspiracy convictions top out at five years, with each tax count punishable by no more than a year behind bars. They're all felonies. 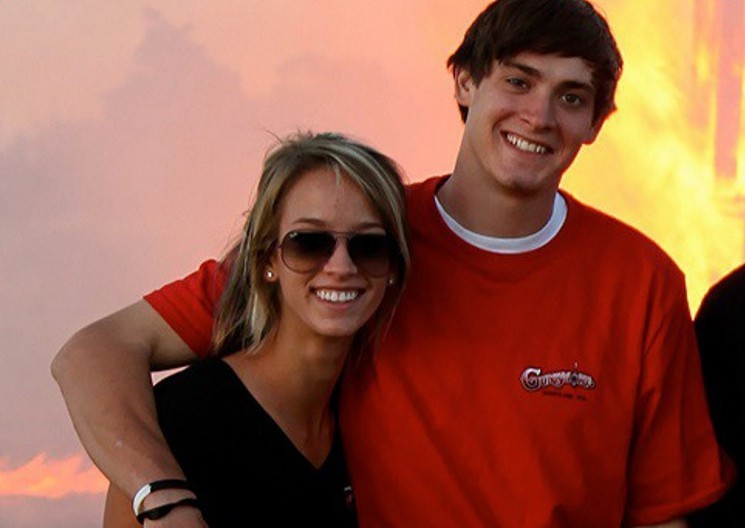 Paige and Kurt Wyatt.
File photo
Afterward, Wyatt, who had been free on bond prior to the trial, was immediately taken into custody in advance of sentencing scheduled for July 19, and officials involved in his prosecution issued statements about the outcome.

"The defendant decided the rules about guns and paying taxes didn’t apply to him,” acting U.S. Attorney Bob Troyer was quoted as saying. "He now faces well-deserved time for that decision."

Added special IRS agent-in-charge Steven Osborne: "The law is clear on the issue of taxable income and who is required to file and pay taxes: there is no gray area on the subject. This conviction sends a message that IRS-CI is working to make sure all taxpayers file and pay their fair share of taxes.”

Echoing this argument was ATF Denver field division special-agent-in-charge Debora Livingston. "The laws and regulations surrounding the sale of firearms exist for a reason, and no one is above the law," she said. "ATF is committed to ensuring every gun dealer is appropriately licensed, educated and inspected, and we will investigate those who believe the rules do not apply to them."

Thus far, Wyatt has not commented on the verdict. Continue to see his original booking photo and the search warrant affidavit.