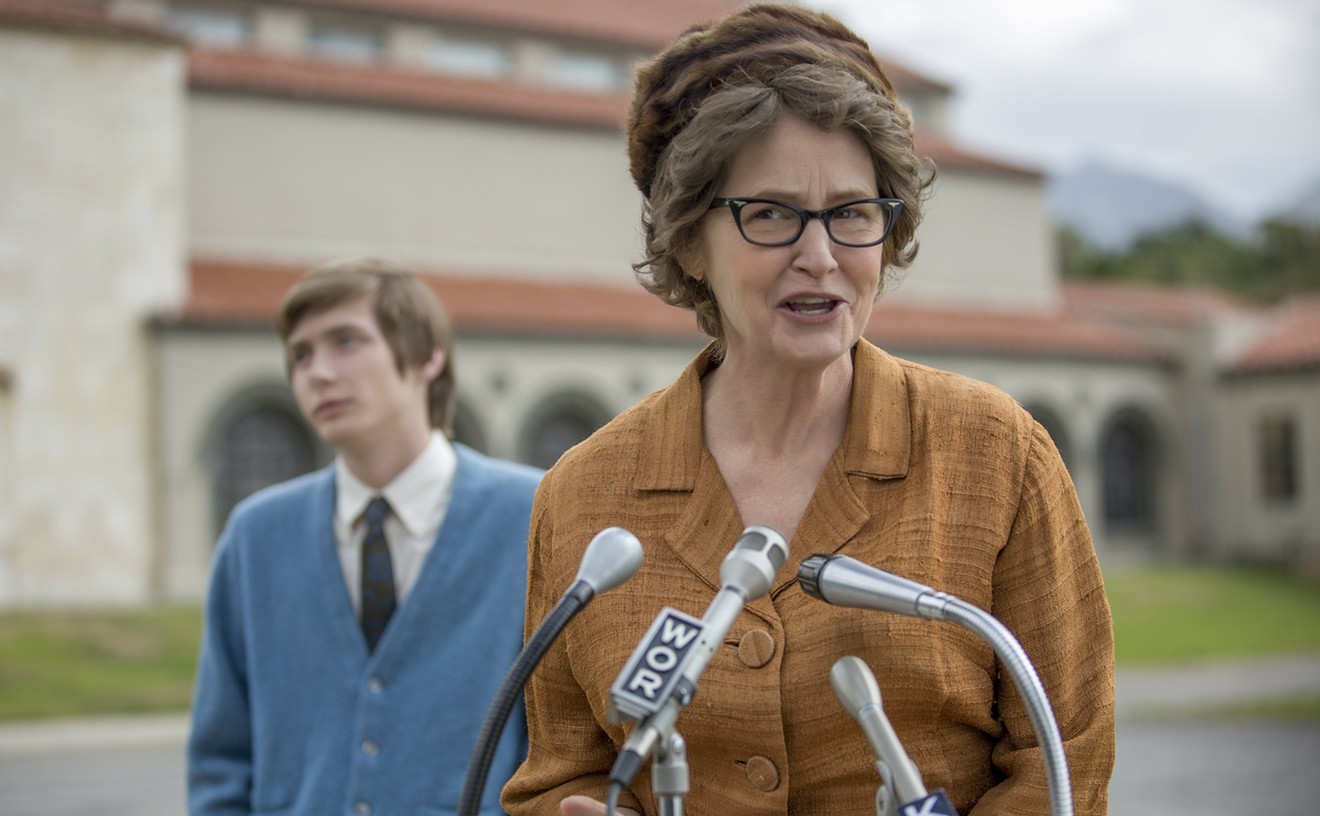 Courtesy of Netflix
Melissa Leo, standing between church and state.
The antagonistic atheist Madalyn Murray O'Hair relished it when Life magazine called her “The Most Hated Woman in America” in the 1964 profile that only heightened her notoriety. That designation followed the 1963 Supreme Court ruling on Murray v. Curlett (and another lawsuit) that ended Bible-reading in public schools. Director Tommy O'Haver captures Murray O’Hair’s influential, larger-than-life personality in a patchy and sympathetic Netflix biopic premiering March 24. He sees the founder of American Atheists as an accidental activist, a social misfit whose ideas clicked with the times — and a savvy opportunist. His Madalyn is also an unfiltered eccentric whose abrasiveness was only heightened by fame.

A ferocious Melissa Leo beautifully hits all of these points, but she adds some uncomfortable layers, playing this woman who proudly challenged convention as an unrepentant, rip-roaring bitch. Murray O'Hair was a force of nature, and Leo captures her formidable bluster, along with flashes of vulnerability contrasting with the stern certainty of her public appearances.

Murray O'Hair appeared as Phil Donahue’s first guest in 1967, and became a talk show staple for decades, in fiery debates with preachers like Bob Harrington (played with reptilian grace by Peter Fonda) or as a staunch defender of the constitutional separation of church and state. She called televangelists money-grubbing con artists, railed against the tax-exempt status of religious institutions, and received regular death threats from God-fearing believers who condemned her godlessness. She was an all-around nasty woman, profane and defiant, and reveled in her ability to enrage and enlighten.

After years of troublemaking in her home base of Baltimore, Murray O'Hair moved the headquarters of American Atheists to Austin, Texas (where The Most Hated Woman in America recently had its world premiere at the South by Southwest Film Festival). Then she officially handed over leadership to her younger son, Jon Garth, though she never fully gave up control. When Madalyn vanished in 1995, along with Garth and granddaughter Robin, her constant companions, the Austin police wondered if it wasn’t simply a publicity stunt.

But O'Haver opens his film with the disturbing truth: The three Murray O'Hairs were abducted by David Waters (Josh Lucas), a former office manager at American Atheists who knew that the family had been milking the nonprofit and stashing funds in offshore accounts. As the kidnapping, which Waters planned to last a few days, stretches into weeks, O'Haver follows a San Antonio reporter (Adam Scott) digging into the disappearance and incorporates flashbacks to trace Madalyn Murray O'Hair's contentious, unconventional life.

With so many narrative threads, The Most Hated Woman in America suffers from tonal whiplash. In early scenes, O'Haver appears to embrace that elusive hybrid, the true-crime black comedy, which was perfectly executed in another strange Texas tale, The Positively True Adventures of the Alleged Texas Cheerleader-Murdering Mom. But he soon slides into more conventional genres: mystery mode as the investigation progresses, and then melodrama when exploring the relationship of Madalyn and eldest son William (Vincent Kartheiser), the plaintiff in that career-making lawsuit and her anointed accomplice in cultural revolution.

An eager-to-please child who adopted Madalyn's atheism and nonconformity, William tried to establish a separate life, only to be pulled back into her powerful orbit. She saw his alcoholism as a sign of weakness, and later adopted William's daughter Robin to serve as his replacement. O'Haver misses an opportunity to explore the gothic family drama of the interdependent Madalyn, Garth (Michael Cherus) and Robin (Juno Temple). The younger Murray O'Hairs live and work with Madalyn, having subsumed any individual desires to serve her everyday needs.

Instead, O'Haver focuses on how Madalyn uses motherhood to control and inspire. She expects absolute fidelity from her children, treating them as compensation for her unfaithful partners while grooming them for succession. Murray O'Hair also sees herself as a grander maternal figure, not only the mother of modern American atheism, but also a saucy, sensible Mother Nature providing an earthy alternative to the paternalism of organized religion.

O'Haver and co-screenwriter Irene Turner (An American Crime) could have taken this effort a step further by asking: Would this devil's advocate have been so demonized if she'd been a white man? But they don't address her firebrand feminism, and their decision to frame her life story with victimization strips away much of her power and complexity.

The criminality of Waters overrides the hypocrisy of Murray O'Hair, but this imbalance is almost rectified by several electric scenes between Lucas and Leo. In flashbacks, Madalyn eyes David as a potential heir, with the killer instinct her children lack, and thinks that she maintains the upper hand in their relationship during the kidnapping. It's a fatal miscalculation, seeing the former collaborator to her corruption as just another snake oil salesman who can be bought instead of a coiled snake waiting to strike.