The Mystery of 1,600 People (or More) Who've Gone Missing on Public Land

Facebook/File photo
Joe Keller and Dale Stehling both disappeared on federal land in Colorado. Keller's body was found last year; Stehling remains missing.
Approximately 1,600 people, and perhaps many more, have gone missing on public lands, according to sources cited in a fascinating new article from Outside magazine. The piece prominently highlights two tragic Colorado cases covered in this space, involving Joe Keller and Dale Stehling. Regis University instructor Heidi Streetman also took part in the article, and she tells us that progress is being made toward her goal of creating a national database that could help solve such mysteries.

Corresponding via e-mail, Streetman notes that she traveled to southern Colorado in May 2016 "to look for Dale Stehling and Joe Keller" in the company of Jon Billman, author of the Outside feature, "How 1,600 People Went Missing from Our Public Lands Without a Trace." Streetman adds that "Joe Keller's remains were recovered in July. Dale is still missing."

We first introduced you to Streetman in the context of the Stehling case back in February 2015. As we reported, Stehling and his wife, Denean, came to Colorado from their home in Goliad, Texas, to take part in a three-week vacation to be spent visiting national parks. On June 9, 2013, they were at Mesa Verde for day four of the tour, having traveled there from the Four Corners area.

That's when Dale told Denean that he was heading off on a hike to the Spruce Tree House ruin, an attraction whose path is reportedly steep but just a quarter-mile long. He didn't return, however, and after two hours, Denean raised an alarm, setting off a two-week search that included as many as sixty rescuers, plus helicopters, two dog teams and rope teams that rappelled off cliffs in the vicinity.

These efforts came up empty, and since then, there have been no developments in the case.

Keller and a group of friends visited Conejos County's Rainbow Trout Ranch in the summer of 2015, as we pointed out in our previous post. Then, at around 4:30 p.m. on July 23, 2015, Keller and a pal went out for a jog and got separated. Keller was never seen again.

Speculation about this vanishing ran the gamut, with foul play among the possibilities considered.

But clues were scarce, and after about a month or so, the search for Keller was suspended.

Seasons passed — and on July 6, 2016, according to the Conejos County Sheriff's Office, a hiker traversing Conejos Canyon spotted human remains near Forest Service Road 250, about four miles west of Highway 17.

In the days that followed, the CCSO, in conjunction with the Colorado Bureau of Investigation and search-and-rescue teams from Alamosa and Archuleta counties, recovered the remains, which were subjected to DNA testing for purposes of identification.

The announcement about the outcome subsequently shared on the Find Joe Keller Facebook page was simple and straightforward.

The DNA results have come back and confirmed that the remains found on July 6, 2016 in the Conejos Canyon are indeed Joe. Continue to keep the Kellers in your prayers [as] they prepare to bring him home. 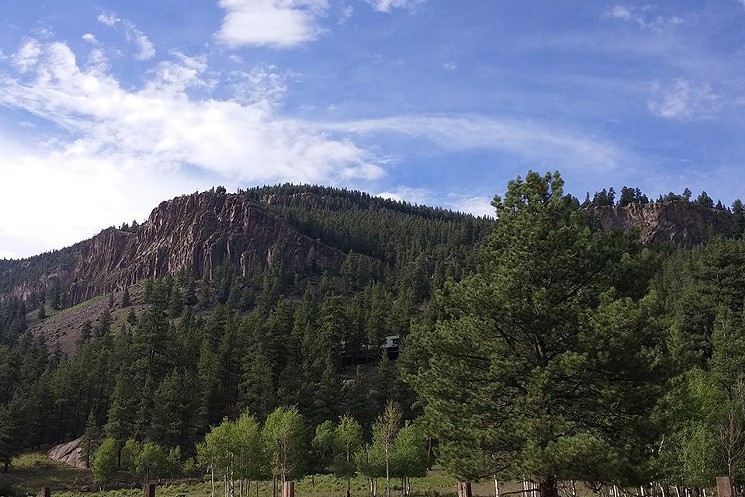 A photo of the terrain in which searchers looked for Joe Keller.
Conejos County Sheriff's Office
At present, there's no way of telling how many stories like this one have taken place on public lands, since there isn't a federal database that allows access to information about such incidents. In the hope of changing that, Streetman launched a petition titled, "Make the Department of the Interior Accountable for Persons Missing in Our National Parks & Forests."

The petition's introduction reads in part:

It is time to demand that a national, publicly accessible registry/database be created in which all missing persons are accounted for in our national parks and forests and on BLM lands. The purpose of this would be to make the government accountable for keeping track and reporting of the missing, to inform the public of the facts surrounding missing persons cases on public lands, as well as keeping account of all missing individuals and the circumstances under which they went missing on public lands.

At present, the petition has collected more than 8,000 signatures; click for more details. Adds Streetman: "The goal is 10,000 signatures before taking it to the next stage. I have been looking into how bills are passed and have queried Congressman Jared Polis to see if the current political climate (gag orders on the Department of Interior, for example) makes a bill unlikely to pass."

In the meantime, Streetman is hopeful that the Outside feature will bring more attention to the issue. In addition, a new documentary on the topic is slated for release in May as part of the Missing 411 series associated with the CanAm Missing Project, which describes itself as "the first website dedicated to understanding the complexity and issues of searching, rescuing and investigating people missing in the wilds of North America."

The man behind the CanAm Missing Project is David Paulides, best known for books intended to prove the existence of Bigfoot. In Outside, journalist Billman concedes that "it’s tempting to dismiss Paulides as a crypto-kook — and some search and rescue professionals do — but his books are extensively researched." For her part, Streetman talks positively about the film, made by Paulides's son Ben, saying that it has "a nice quality.... This documentary gives the personal stories of families with missing loved ones. It should further raise awareness of the issue. It's possible that showing the documentary to lawmakers could help the cause of getting a law in place that requires accountability."

Look below to see a trailer for the documentary, which includes a cameo by former Interior Secretary Ken Salazar.