Lindsey Bartlett
A new mural celebrates the most basic concept: Be a Good Person.
A new piece of street art has bloomed in the Golden Triangle, along with some spring flowers. The mural urges you to  "Be a Good Person," a relevant mantra in today's cold world; it also happens to be the name of a local brand that promotes positivity via clothing, stretching a good-karma mission into local events, art projects, social media and community engagement.

BAGP founders Darian Simon and Julian Donaldson have long been inspired by local creatives; artists designed pieces for the brand's headquarters. The clothing company has gained huge momentum in the few short years since its creation, and it's on the radar of celebs such as Lil' Jon, Waka Flocka, Emmanuel Sanders and Megan Rapinoe, to name a few.

To launch the project, Simon and Donaldson called on Fitness in the City, at 1212 Delaware Street, and owner Stefan Olander, a longtime friend, to see if they could bring the business's east-facing wall to life with a mural. Olander gave them free rein on the design, knowing only that the message would be massive and the work would incorporate the skills of some local street-art pros. 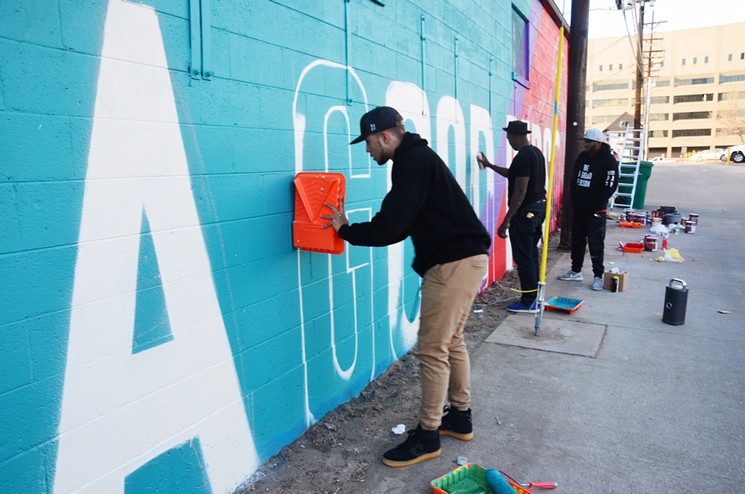 Darian Simon, Thomas Evans and Necos Jackson work on the BAGP mural.
Lindsey Bartlett
"Stefan [Olander] was like, 'Hey, we have this dope-ass wall. We'd love to have Kiri be a part of it and Thomas be a part of it,'" says Simon. "He just knew whatever was going to come out of it, they would be happy with."

The piece began with the signature roses painted by Thomas Evans, best known in Denver for his artwork inside the Meadowlark Kitchen and as a RedLine resident; he's also gained notoriety under the Instagram handle @detour303. Over the course of the week, additions to the mural were made by Kirileigh Jones, Crispysz and Javon the Unique.

Jones added her mandala and sacred geometry to the "Be a Good Person" lettering in silver paint — a time-consuming task. Javon the Unique painted his crawly monster tentacles up the left center of the piece. Two more vibrant characters — on the far right and in the center — were painted by Crispysz, a local artist known for his "heart boy," a one-eyed, heart-headed pink figure that graces the top of the mural. Details: roses by Thomas Evans; complex arabesques inside the lettering show additions by Kirileigh Jones.
Lindsey Bartlett
"We just have a vision for the city that's so much more than hating on each other," Donaldson says. BAGP plans to continue its tradition of philanthropy with events under the umbrella of "A Good Party"; the group is slated to open a RiNo storefront this year.

It was a busy week for BAGP, Jones and Evans, who painted a second mural on the garage doors on Dae Gee at 460 Broadway.

"This is the purest form of collaboration," says Simon. "Just to show that there are so many hands that went into this, who love each other, who, regardless of medium, want to spread a positive vibe."

Is it surreal to see their brand so big on a wall? "Hell, yeah," Simon says. "This is my first time painting. And I'm lucky enough to do it right next to Thomas Evans."
click to enlarge