Neil Gorsuch on Mutton Busting, Going Bigly, and Whether the Law Is an Ass

Brandon Marshall
Mutton busting at the 2017 National Western Stock Show...rougher than a Senate confirmation hearing?
The Senate is slated to start voting on Judge Neil Gorsuch's nomination to the U.S. Supreme Court by April 4. That gives us time to mull over the testimony that the Colorado native gave during his three-day confirmation hearing last week, at which everything from Wyoming blizzards to fishing to mutton busting was discussed. Speaking of which...

“Mutton busting, as you know, comes sort of like bronco-busting for adults. You take a poor little kid, you find a sheep, and you attach the one to the other and see how long they can hold on.…You know, it usually works fine when the sheep has got a lot of wool and you tell them to hold on — I tell my kids hold on monkey-style, you know? Really get in there, right? Get around it…because if you sit upright, you go flying right off, right? So you want to get in. But the problem when you get in is that you’re so locked in that you don’t want to let go, right? And so then the poor clown has to come and knock you off the sheep," observed Gorsuch. "We can talk mutton busting all day.”

But he didn't get to, because there were pesky things like issues to discuss. For example, when a senator asked about a woman's lawsuit claiming that her son had been subjected to false arrest at an Albuquerque middle school, Gorsuch replied:

“If a seventh-grader starts trading fake burps for laughs in gym class, what’s a teacher to do? Order extra laps? Detention? A trip to the principal’s office? Maybe. But then again, maybe that’s too old-school. Maybe today you call a police officer. And maybe today the officer decides that, instead of just escorting the now-compliant thirteen-year-old to the principal’s office, an arrest would be a better idea. So out come the handcuffs and off goes the child to juvenile detention. My colleagues suggest the law permits exactly this option, and they offer 94 pages explaining why they think that’s so. Respectfully, I remain unpersuaded.”

In discussing that case, Gorsuch also referred to a character in Oliver Twist:

“Often enough, the law can be ‘a ass — a idiot’…and there is little we judges can do about it, for it is — or should be — emphatically our job to apply, not rewrite, the law enacted by the people’s representatives. Indeed, a judge who likes every result he reaches is very likely a bad judge, reaching for results he prefers rather than those the law compels. So it is I admire my colleagues today, for no doubt they reach a result they dislike but believe the law demands — and in that I see the best of our profession and much to admire. It’s only that, in this particular case, I don’t believe the law happens to be quite as much of an ass as they do.”

Especially when the law takes its cue from the Founding Fathers. “The Constitution doesn’t change," Gorsuch offered at another point. "The world around us changes.”

But Gorsuch also promised this: “I'm not looking to take us back to quill pens and the horse and buggy."

And that circumspection carried over to the political process. Asked about Judge Merrick Garland's nomination being stalled last year, Gorsuch responded: “I can’t get involved in politics. There’s judicial canons that prevent me from doing that. And I think it would be very imprudent of judges to start commenting on political disputes.”

As for his own conformation process: “There’s a great deal about this process that I regret. I regret putting my family through this,” said Gorsuch, who'd clerked for Justice Byron White, the only Coloradan to sit on the Supreme Court. "When Byron White sat here, it was ninety minutes. He was through this body in two weeks, and he smoked cigarettes while he gave his testimony.” 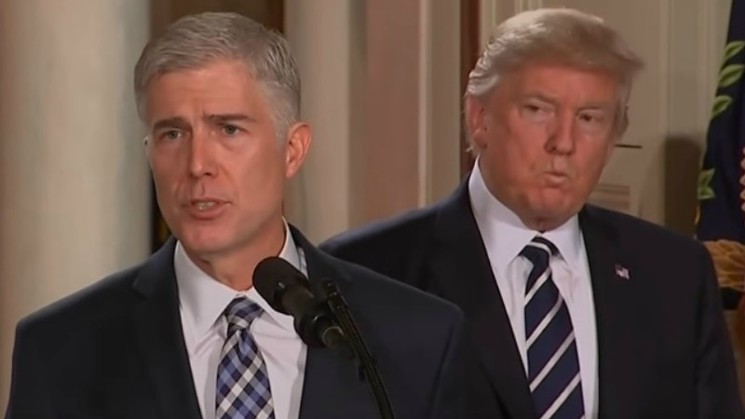 Coloradan Neil Gorsuch with President Donald Trump, who nominated him for the U.S. Supreme Court.
ABC via YouTube
Before the hearings, of course, there was all the vetting to even be nominated for the U.S. Supreme Court. Before his name was announced, Gorsuch had met with President Donald Trump, who'd expressed disappointment that he hadn't carried Colorado. “He said something like, if he had a little more time, he thinks he would have won,” Gorsuch told the senators.

That meeting was long, but it was long enough for Trump to have an impact on Gorsuch. On the final day of his testimony, as the judge noted, "No one remembers who John Hancock was, but they know that that's his signature because he wrote his name so bigly — big and boldly."

And Gorsuch himself went bigly when asked about Trump's attacks on certain members of the federal judiciary. “When someone criticizes the honesty, the integrity or the motives of a federal judge, I find that disheartening, I find that demoralizing,” he replied. Any someone, a senator asked?

"Anyone is anyone," Gorsuch concluded.