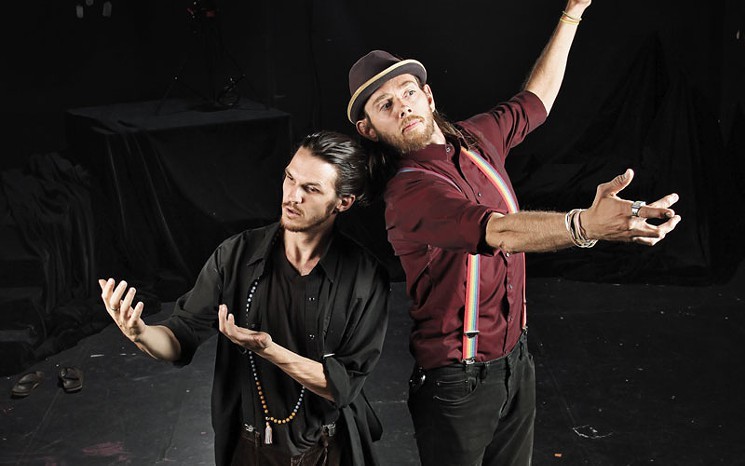 A new mural, by two local Muslim-American artists, adorns a wall in the lobby. Its subject, a pregnant African-American woman with long, thick eyelashes, is a nod to Crossroads' neighborhood, Five Points, once the epicenter of African-American culture in Denver.

Jaryd Smart can't claim the mural, but the new coat of deep blue on the walls inside the theater is all his. He takes a seat on the stage and, under bright lights, talks about the rocky but still-promising future of Crossroads, which continues to host comedy troupes and locally written plays.

The director of operations at Hope Communities, Crossroads' landlord, recently told Westword that Crossroads is struggling; the theater company is behind on rent, leaving Hope, an affordable-housing provider, to cover mortgage payments.

Of course, none of this is news to Smart. But what he does find surprising is the death sentence being given to Crossroads. "We saw 300 people at one of our shows this past weekend," he explains.

Crossroads has dogged problems since its inception, after lawyer and theater advocate Kurt Lewis saw the space at the corner of North Washington and Welton streets and thought it ideal for a community theater. But Lewis had Parkinson's, the complications from which prevented him from truly seeing his vision through. The City of Denver assumed control of the theater in 2010, but soon realized its experience running large venues like Red Rocks didn't translate to smaller spaces. In 2013, a church took over Crossroads, but after its pastor left two years later, the Center for Spiritual Living Denver decided against renewing its lease. Crossroads Creatives, Smart's collective, took control of Crossroads in 2016. Throughout the year, the collective's members started leaving one by one. Only Smart and Erik Rodne remain, and Rodne is taking a break because of medical issues.

Hope Communities’ Dennis Malone.
Anthony Camera
Smart's biggest problem at the moment is Crossroads' lease. Last year, Hope Communities cut it to three months at a time, which created problems with booking. After all, how could Crossroads guarantee a theater company or a comedic troupe space in 2017 if it wasn't even sure if it would be around by the end of 2016? Then, in January 2017, Hope cut the lease to month to month.

"Our landlord is hoping someone will come along who can actually pay rent every month," Smart says. "We're hoping that's us."

Smart says he's trying to turn the space into a co-op theater, in which the various companies that use Crossroads' stage sign a contract that guarantees them practice and performance space for a monthly fee (no one has officially signed on yet; contracts are still being processed). That would cover rent. He's also trying to launch a fundraising campaign over the next month to pay Hope the back debt Crossroads owes, "because it's very much appreciated," he says.

Smart says a grocery store is potentially vying for the space. But, "that's why [Hope] very much believes in us," he explains. "This grocery store isn't going to pay our old debt. It doesn't care. They're just going to come in and tear everything down. We don't know if the grocery store will be successful or affordable or help with the food-desert issue that happens as you move more of this direction [he motions to the east] across the city."

As he recruits more co-op members, Smart says, he's doing what he can to stay productive. "You gotta keep working," he says. "So, cleaning, which is a constant in a community space, and painting to get rid of the old color. We're trying to shift as much of the energy of the past years off of it as we can."

Smart's hands are covered in blue. The paint on the walls isn't even dry yet.