Restaurant Roll Call: All the Openings and Closings for March 2017

Mark Antonation
Quality Italian opened in Cherry Creek during the first week of March 2017.
Denver rebounded from a slow February (which saw only a dozen or so openings) and added more than twenty new restaurants in March. Some of the biggest were new hotel restaurants; Quality Italian landed at the Halcyon in Cherry Creek, while Kachina and Poka Lola Social Club moved in at the Maven downtown. Other well-known restaurant groups brought new locations of Bubu (at Republic Plaza on the 16th Street Mall), Biju's (in the Whole Foods on East Hampden Avenue), Ali Baba Grill (in LoHi) and Smokin' Dave's BBQ, which came down the mountain from Estes Park to light a fire in north Denver.

We also said goodbye to a favorite neighborhood hangout: Jake's Sports & Spirits on Walnut Street closed earlier this week, but new owners will remodel the place and reopen it as a German-style beer garden this summer. And not too far away in RiNo, Owlbear Barbecue served its last brisket at Finn's Manor; but the Texas-style smokehouse could return in a new brick-and-mortar location soon. 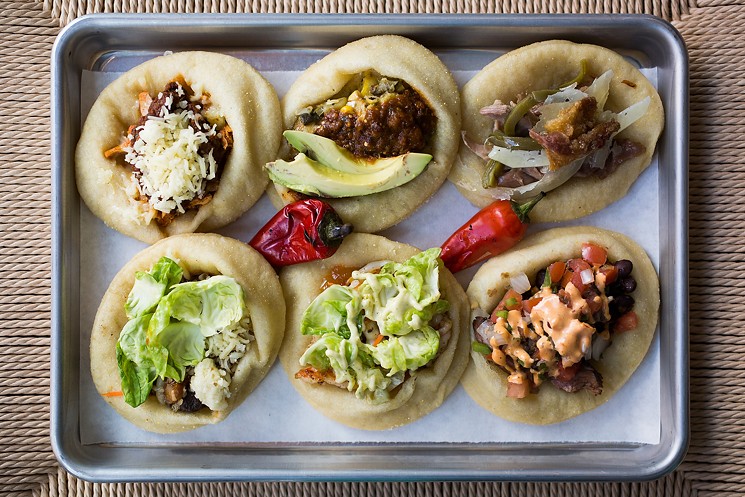 An assortment of Navajo fry-bread tacos at Kachina.
Danielle Lirette
Expect big things for April, too, as the Stanley Marketplace fills in its remaining restaurant slots and the nearby Eastbridge Town Center in Stapleton gets ready to unveil the first of several big-name eateries — with Cattivella and Concourse among the first.

Here's our complete list of restaurant and bar openings and closings in March 2017:

*Or earlier, and not reported in a previous Roll Call.