Talk About Pot Luck! Ganja Gourmet Gets Ready for Its Next Course

Scott Lentz
Ganja Gourmet has gone through several incarnations since opening in 2009.
“Some people are very lucky — everything they touch works for them,” laments Steve Horwitz, owner of Ganja Gourmet. “But for whatever reason, ever since I opened this business I’ve had a black cloud around me. Pretty much nothing has worked the way it should have or could have.”

Horwitz, a seasoned salesman in his fifties with a hearty Long Island accent and a gold chain around his neck, doesn’t take no for an answer, though; he just shifts his approach and tries again. Over the past eight years — the period during which the marijuana industry exploded in Denver — he’s changed his business model four times. He opened Ganja Gourmet at 1810 South Broadway in late 2009 as a medical marijuana restaurant (and one of the first spots William Breathes reviewed), turned it into a takeout joint in 2010, transformed it into a medical dispensary in 2011, then changed it into a medical/recreational store in 2015. Now, to keep up with the times, Horwitz is gearing up to stamp his candy logo on wholesale edibles and partner with a smoke room once social consumption is allowed.

This wasn’t a business Horwitz could have imagined when he first came to Colorado on a ski trip in 1991. In fact, he didn’t even plan to stay here. “I got to Colorado and the sun knocked me down,” he remembers. He soon decided to move across the country. “I had no idea what I was going to do, but I knew I was going to be self-employed,” he says.

He wound up launching Magnets and More, a marketing firm specializing in promotional products, out of his new home in Denver. Within two months, Horwitz had hired on four employees and bought an old brick bungalow at 1810 South Broadway. Over its eighteen-year run, Magnets and More had a tight hold on its real-estate niche, supplying key chains and refrigerator magnets to agents around the country.

When business was going well, “I was oozing with self-confidence,” Horwitz says. “I was dangerous. I was flipping out, and the reason is, I never had any self-esteem my whole life.... I was very ADHD; I was picked on every day in high school.” But in Colorado, he discovered snowboarding and the beauty of a perfect powder day, and went from being “this angry, money-obsessed, self-effacing individual [to] this happy, confident, crazy dude,” he says. “I had just become my own best friend right about the time the economy crashed.”

Real-estate agents were hit hard by the 2008 bust, and although Magnets and More lost most of its business, Horwitz was ready to make a shift. “When you’re an adult and you have kids and responsibility and bills, you have no choice but to be adaptable,” he says. “Even people who work for other people, they lose a job, they have to go get another job. You have to re-create yourself, so that’s what I did: I re-created myself.”

Changing the name on his sign to Consider It Done, he focused on a new clientele, targeting doctors, hospitals and urgent-care centers. “They were opening all over the place, and anyone with any brains would want to be on the refrigerator in front of the customer,” Horwitz recalls. “I thought it was recession-proof, and I was wrong. They were all on spending freezes.”

Just when Horwitz realized he’d need to shift course again, a lift operator at Loveland treated him to some cannabis-infused cheesecake. “It totally rocked my world,” he remembers. “I went to three lawyers, and all of them told me that there was nothing stopping me from opening up a medical [marijuana] restaurant.”

Coloradans had approved an amendment legalizing medical marijuana in 2000, and a recent court ruling had paved the way for MMJ dispensaries. Now it looked like Denver was ready for a restaurant where customers with medical cards could consume food containing marijuana. 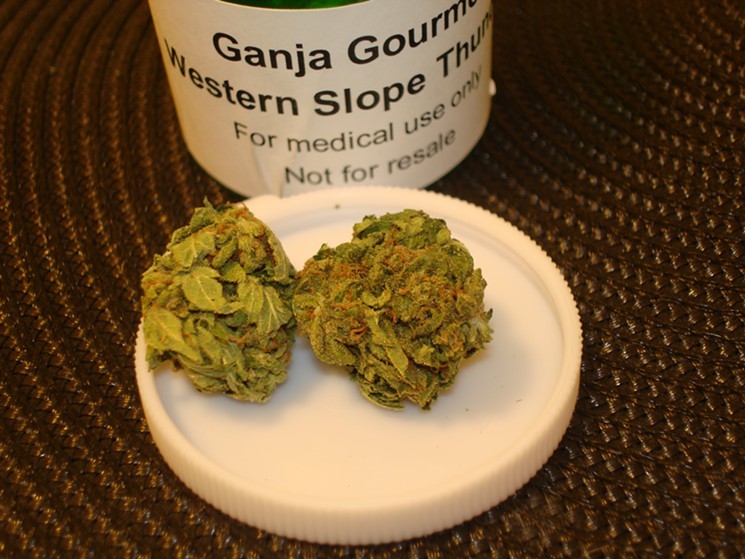 Ganja Gourmet opened in late 2009 as a marijuana restaurant.
Westword
And Horwitz was ready to give it a try. “I was never an illegal pot seller or an illegal pot grower in my life,” Horwitz says, and he’d never worked in the food and beverage industry, either. But while he didn’t have a medical marijuana card, he understood cannabis. “I am Captain ADHD, so believe me, marijuana has been my friend since I was seventeen years old,” he declares.

Horwitz scraped together $30,000 and invested everything into making edibles. After putting an ad in Westword for a cannabis chef, he sorted through more than a hundred résumés and chose Jenny Fowler. Together they created not just chocolate, cherry and pineapple cheesecakes, but five kinds of brownies, almond horns, pizza, pot pot pie, lasagna, jambalaya and ganjanade, a variation on tapenade — all of Horwitz’s favorite foods infused with ganja goodness.

Ganja Gourmet opened for business at the end of 2009. Just days later, Horwitz got an unexpected plug on The Tonight Show. On December 17, 2009, Jay Leno joked about the “new medical marijuana shop in Denver called ‘Ganja Gourmet’ that is now serving a marijuana pizza. Talk about killing two birds with one stone: I mean, you’re going to order the pizza anyway....”

For three months, the place was thick with both business and smoke, as a customer named Crystal passed around a two-foot-long pipe with a bowl the size of a soup bowl. “You walk through the door, someone hands you a joint, and then you get a free appetizer — ganjanade and pita bread,” Horwitz remembers.

But then Denver City Council put a rule banning “on-site consumption” on the books, so in 2010 Horwitz changed his model to takeout only. He’d give customers goodie bags of what he called his “soon-to-be famous” ganjanade.

Ganja Gourmet continued to get plenty of free media coverage. George Lopez riffed about the business, and Triumph the Insult Dog visited. But with fewer than 50,000 medical licensees in the state, the customer pool was limited, and all that attention did not translate into revenue.

Creating edibles was expensive, too. Fowler liked to make cannabutter in a crockpot rather than use butane or CO2 extractions. While Horwitz still argues that this creates a superior product, it also meant serving pizza and cake at $12 a slice, $79 a pie. “We could never get the price point right or the consistency right for wholesale, so we were only making them for the store, but the store was never covering the cost of making them,” he says.

And instead of investing in a grow from the get-go, Horwitz had opted to partner with someone with experience. When that partnership fell through, he decided to start his own grow, only to find that warehouses prices had sextupled. “If I had done that in 2009, when landlords couldn’t rent them for $4 a square foot and they were sitting empty, before the landlords were jacking up the price to $24 a square foot, I could have gotten a great deal,” he reflects. “If I could do it all over again, I would focus on getting a good grow; that’s what the people who are successful in this business did.... Instead, I put all my resources into cooking edibles. I had to mortgage up every piece of real estate I owned just to keep the doors open.” (In addition to the South Broadway property, which includes the Habibi Hookah Cafe and Habibi Smoke Shop, Horwitz owns a house and a ski lodge.)

Finally, in 2011, Horwitz closed the kitchen and turned Ganja Gourmet into a medical marijuana dispensary, stocking edibles made by other retailers. He was considering closing up shop altogether in 2012 when Amendment 64 passed, paving the way for recreational sales. While Colorado developed regulations for retail stores, Horwitz built a wall across his shop so that he could separate the medical business from the recreational. He finally opened up the second side for retail cannabis sales in March 2015. But through its many transitions, Ganja Gourmet never closed entirely.

“How did I get through the hard times in my life?” Horwitz asks, then answers, “Absolutely by listening to Howard Stern. Baba Booey! If it wasn’t for Howard Stern, I don’t think I would have survived.”

Then last November, voters in Denver approved Initiative 300, which will allow for the social consumption of marijuana in public places, in accordance with state law and regulations that the city is still working out. This was just the opportunity Horwitz had been waiting for. Although customers will still not be able to consume marijuana in dispensaries like the Ganja Gourmet, Horwitz has a tenant, the Habibi Hookah Cafe, that can apply for a cannabis-use permit because it does not have a liquor license. “It will be a strategic partnership,” Horwitz says.

The rules for making edibles have changed since Ganja Gourmet served its almond horn — the state now calls for mandatory testing and particular packaging — but Horwitz is ready to get back in the kitchen. “You have to change with the times,” he says. “Within the year...we will be doing cheesecake bites and brownies bites, and it’s going to be packaged in really cool tie-dye boxes.” Though Ganja Gourmet will be using its original recipes, many will have been modified to contain butane-extracted cannabis concentrate instead of cannabutter. Sizes will also vary: For the medical market, Horwitz will bring back the original almond horn, but the recreational version will be reduced to an almond bite, in compliance with portioning requirements. And this time, he plans to not just stock Ganja Gourmet’s shelves, but to offer products wholesale throughout the state.

Though Horwitz did not strike it rich in the early days of the green rush, he considers himself lucky to still be in the cannabis business when so many others have left. “On the one hand, you can pat me on the back and say, ‘It’s good you didn’t quit,’” he says. “But on the other hand, maybe they were smarter. Maybe they were smart to get out, and I just don’t know how to quit.”