Denver 420 Rally: Attempt to Ban It Would Trigger a Lawsuit, Attorney Says

Photo by Michael Roberts
Civic Center Park the morning after this year's Denver 420 Rally.
An attorney who plays a key role in the annual Denver 420 Rally is pushing back against criticism of the event delivered by Mayor Michael Hancock and other officials at an April 24 press conference. Rob Corry insists that organizers didn't violate their permit for Civic Center Park and rejects the possibility of fines because the location was still strewn with garbage the next morning. He also feels that Denver should accept some responsibility for problems at the gathering, including long security lines that eventually led to some attendees breaking down a fence, and he promises that should city reps attempt to prohibit the rally entirely, they'll wind up in court.

"Absolutely they would," Corry says. "But we believe that would never be necessary, because the city understands the First Amendment."

Hancock "gets criticism from some people who want to outright prohibit our activity," Corry acknowledges, "and as of a few years ago, he is documented as expressing his desire to do that, too, which obviously he knows he can't do."

Corry is referring to Hancock comments from an October 2013 interview with Colorado Public Radio about a free joint giveaway that were initially reported as a call for banning the festival. Shortly thereafter, a mayoral spokesperson clarified that Hancock wasn't arguing for ending the rally, since it is a "free speech" activity.

Nonetheless, Hancock's antipathy for this year's rally, and especially its aftermath, was obvious during the aforementioned media availability — a get-together that took place without any heads-up for Corry and company.

"First and foremost, we would have welcomed a phone call from Mayor Hancock or anyone from the city before they decided to convene a full-blown press conference about our rally, which we organized," Corry says. "And we would still welcome a discussion with the city. We're happy to talk with them, and see it as an opportunity to fine-tune things and make the rally run smoother next year."

This last remark shouldn't be construed as an admission that the organizers did anything wrong. "We complied with every single demand of the city, and we're in full compliance with all of our agreements that we entered into in advance," says Corry, who echoes chief organizer Miguel Lopez's previously reported assertion that the rally permit gave staffers until noon the following day to tidy up the park.

He also sees hypocrisy in officials' horror at the condition of the park on April 21. 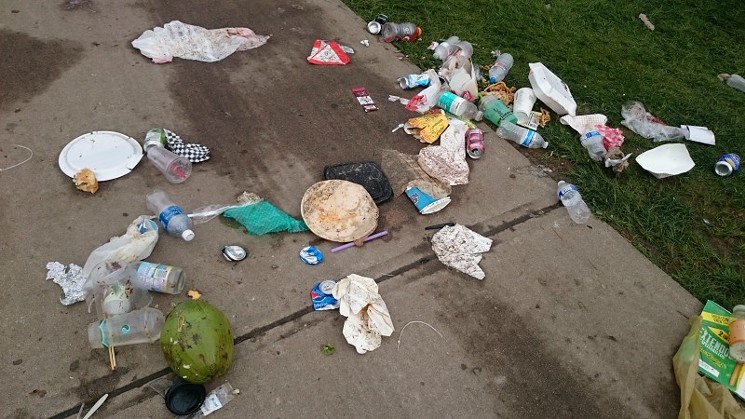 Photo by Michael Roberts
"My office is a block away from Civic Center Park," he points out. "I walk through there frequently, and it just isn't the case that the city protects and preserves it as any kind of crown jewel in its parks system. Civic Center Park is a virtual homeless encampment for the majority of the year, and when the 420 Rally comes in there, we improve it. We leave it cleaner than we found it. Actually, I think we make the park safer and better on the days when we have our permit."

On the other hand, Corry is relieved that "the city has kind of dropped this idea that we were responsible for a shooting that happened at the same time as the rally" — specifically a report of gunfire near the intersection of 15th and Cleveland Place, just north of the park, at around 6 p.m. on the 20th. "That was part of the initial press conference, as if we were somehow to blame if someone starts shooting near the 16th Street Mall. That's ludicrous. We haven't been given any details — the name of a perpetrator or anything — but we know it wasn't associated with the rally in any way. And even if it had happened on the rally premises, it wouldn't have necessarily been our fault, any more than what happened at the Boston Marathon a few years ago was the fault of the organizers there."

Still, Corry says, the shooting "presents an opportunity to continue our discussions with the city as to the need of fences and barriers and the wanding of every member of the public who entered into the park, which did cause some problems because we were complying with the city's demands. We put up those fences at the insistence of the city, and we put a city-approved number of security guards there. And frankly, having thousands of people trying to get into the park over the course of a few hours did cause some backups and frustration. Maybe we need to rethink that, especially if we're going to be called to account for people jumping those fences. They might not be necessary and cause more problems than they solve."

There's also the matter of what Corry sees as a double standard in the way Denver treats the rally: "The city allows Cinco de Mayo, and we'll be monitoring that event very closely to make sure there are no burrito wrappers left on the ground or any drunken brawls, since they serve alcohol there. We assume that if any of that happens, the mayor's going to convene a press conference."

In Corry's view, "there are some elements of society that would love to demonize us — and it's clear that we're treated differently. There are alcohol events that are allowed in Civic Center Park, where alcohol is consumed with the full blessing of the city. But we don't have the same blessing to consume marijuana in Civic Center Park. We're working to get there, and we will get there; it's inevitable. But that's one reason why we still need to have a political event."

Continue to read the official statement from Corry and other organizers about this year's event.

Denver’s Mayor has joined with social media commentary in expressing concern about “trash” in Civic Center Park the morning after the Denver 420 Rally, and also has implied the Rally is somehow to blame for an alleged shooting in Downtown Denver far away from the Rally with no link between the perpetrator and the Rally.

The Denver 420 Rally organization and Civic Center Park Productions, LLC previously spent hundreds of hours, and hundreds of thousands of dollars, to comply with all requests of officials from the City and County of Denver for permit conditions. As with many previous years, all permits were granted by the City pursuant to conditions for cleanup and safety. The Rally and production thereof was — and is — in complete 100 percent
compliance with all permit conditions for 2017.

The City granted Rally producers the following day, April 21, 2017, to clean up after the Rally and gave the Rally sole access to the Park to do so. The Rally complied in advance of the City’s own deadline, using paid cleanup crews (which were also previously approved by the City), and the Rally returned Civic Center Park under cleaner conditions than it began. The Rally’s compliance with these conditions is not violated because unauthorized people trespassed in the Park during the permit period and took photos of trash that was cleaned up in advance of the deadline.

The Rally will not be blamed for an alleged shooting outside of and unassociated with the Rally. In fact, the Rally complied with the City’s demand that it hire security crews to hand-wand all members of the public entering Civic Center Park, which caused huge lines and some frustration.

The Rally values its historical permit status and important contribution to Denver’s diversity and culture, and looks forward to continuing its relationship with the City for many years in the future.