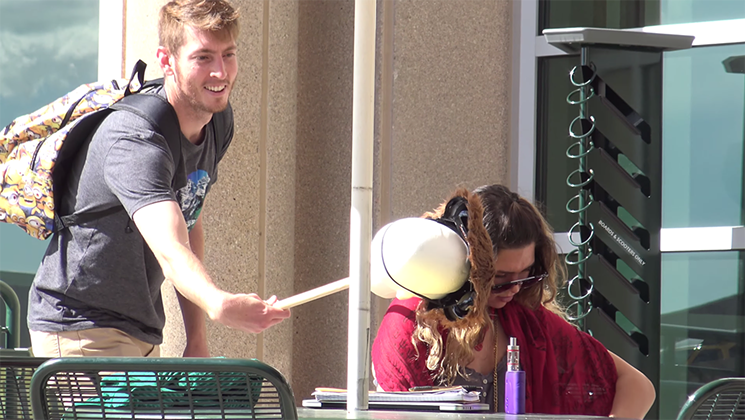 Andrew Scites of JStuStudios pranks random people on Halloween.
YouTube
It's official: Videos of cats and pranks on YouTube provide a few lucky people with a decent living. And there is plenty of homegrown talent in the mix. From Colorado's vloggers, musicians and fort builders to "squishy" un-boxers, here are five of the most popular Colorado-based masters of YouTube.

MoreJstu and JStuStudios
At the top of our list are the comedy channels MoreJstu and JStuStudios, which showcase Colorado natives Justin Start and Andrew Scites, a duo operating primarily out of Colorado Springs, as they prank customers and build forts at Walmart, IKEA, trampoline parks and other assorted businesses. Be sure to check out "Loud Eating in the Library!" The video is exactly what it sounds like, but much funnier than you'd think.

Tyler Ward
Denver musician Tyler Ward specializes in videos of pop-music covers, but his original songs are well represented on his channel as well. Be sure to check out "Some Kind of Beautiful," which co-stars violinist and wildly popular YouTuber Lindsey Stirling.

The Fast Lane Car
If you love off-roading or need some advice on a new vehicle, the Boulder-based Fast Lane Car, which offers automotive news and reviews, is the channel for you. Segments include head-to-head performance tests that put vehicles to work on Colorado's roughest roads and trails.

PurpleBanana25
Under the "oddly popular" category is PurpleBanana25. This channel offers shopping, fashion and "squishy" content featuring Colorado native and former Miss Teen Earth Philippines Hannah Tolentino. Squishies are foam toys, often shaped like fruit or baked goods, with a texture similar to that of a stress ball. Though many of Tolentino's videos show her squeezing the "squishies" directly into the camera, it's her charming personality that viewers will stick around for.