Ski Resorts in Colorado and Beyond Are Hiding Risks, Safety Advocate Says

Facebook
Logan Salviano died skiing at Vail in January 2016. Additional photos below.
As the 2016-17 ski season winds down, Colorado resorts have been linked to fourteen fatalities, the most in five years. And according to Dan Gregorie of the SnowSport Safety Foundation, ski areas here and throughout the country are hiding risks by failing to provide any data about injuries and casualties, as well as by refusing to publish their safety plans.

"There are no laws of this kind in any state related to the ski industry," says Gregorie, who created the organization after the death of his 24-year-old daughter at a California resort in 2006. "The ski industry effectively has no regulation or safety oversight."

The ski industry rejects this analysis, as seen in a letter penned by Michael Berry, president of the Lakewood-based National Ski Areas Association (NSAA). The document, provided by Gregorie, argues that exposing resorts to greater risk of litigation is the "apparent goal" of the foundation — an assertion Gregorie denies. But the letter also offers a far more detailed response to criticism than is typically shared publicly by ski-industry representatives.

By the way, all italics in excerpts from the letter appear in the original.

"In truth," Berry writes, "ski areas across the U.S. are highly regulated, with laws, rules and oversight by dozens of local, state and federal agencies, including tramway boards, the U.S. Forest Service, OSHA, state and federal departments of labor and transportation, the Environmental Protection Agency, the Bureau of Alcohol, Tobacco and Firearms and the Department of Homeland Security. In addition. dozens of separate state statutes, as well as decades of well-developed case law, impose a wide variety of obligations on ski areas specifically regulating ski area operations."

An image from the SnowSport Safety Foundation Facebook page.
Facebook
To Gregorie, a physician who's spent much of his career involved with quality and safety management in the health-care industry, these assertions represent a smokescreen. "Resorts are regulated in terms of food service and mechanical operations of their lifts — and there are some safety requirements they have to produce as part of their permitting process, like marking the boundaries and having a ski patrol," he acknowledges. "But that's far from having a true safety plan. On the slopes and trails, where people get killed and injured, there are no safety regulations, no data and no transparency."

Resorts aren't required to share information about deaths, either, Gregorie adds — "but even more important, they aren't required to report the number of serious accidents and injuries. Because of that, the public has no way to consider safety in their selection of ski resorts."

In our reporting about Colorado ski deaths, we've noted that no state or federal agency officially gathers information about resort casualties. Hence the task is left to the ski areas themselves or industry groups such as Colorado Ski Country USA, associated with 22 resorts in the state, or the NSAA, which compiles an annual list of deaths across the country sans names, locations or specific details.

These groups do their best to release the smallest amount of information possible about each episode, which tends to minimize negative publicity that inevitably accompanies such accidents. But this approach can lead to some deaths being effectively concealed from the general public. For example, Westword was the first news agency in Colorado to report that Jim Bell, a firefighter from Kansas, died after a ski accident at Crested Butte in February — but a Colorado Ski Country representative said he was unaware of Bell's identity when we contacted the group for an April 18 post.

There's a similar dearth of information about deaths and injuries at ski resorts in California, where Gregorie has focused his efforts. "Our organization did research using a hospital payment database that the Department of Public Health in California has," he says, "and we were able to document that there were at least 11,000 [skiing-accident-related] emergency-room visits and over 600 hospital admissions on average per year, based on a five-year study that we did a couple of years ago."

These studies are available on the SnowSport Foundation website along with the organization's proposed Resort Slope and Trail Safety Responsibility Code, which "lays out sixteen things any reasonable ski resort ought to be doing and ought to commit to be doing for customers," Gregorie says. The code is shared at the bottom of this post.

In his letter to Gregorie, the NSAA's Berry rejects the code as "a roadmap for lawyers to make it easier to sue ski areas and create more litigation exposure for ski areas."

A photo from the National Ski Areas Association Facebook page.
Facebook
Likewise, Berry argues that the SnowSport Foundation has "a critical lack of understanding about ski injury causation. The overwhelming cause of injuries or fatalities in the sport continues to be individual error, loss of control or some other related misjudgment — not ski area operations. That conclusion has long been accepted by injury experts. For more than fifty years, the skiing public has embraced and abided by the ski industry's 'Your Responsibility Code,' which has been copied and adopted by numerous other organizations and recreational activities. Simply put, individual responsibility is the over-arching hallmark of ski injury prevention, and your organization appears to make zero effort in emphasizing this critical fact."

For his part, Gregorie concedes that there are inherent risks associated with skiing. But he feels resorts could do a lot more to enhance safety than is currently happening.

"There's no standardization in the designation of difficulty, and certainly no common safety standards," he allows. "One example is the padding that's used on lift poles that you see at ski resorts. In almost all of them, the padding will cushion an impact of no more than five to seven miles per hour — but the average skier travels at speeds up to 25 miles per hour. Design of trail intersections is another critical piece. And terrain parks are the most egregious example of a lack of safety regulations. These are areas with acrobatic features, where young people are encouraged to imitate what they see in Olympic events and other activities — but there are no standards for the acrobatic features at these parks, which is really unconscionable. And if you ask to see the safety plans, which I have, they'll sometimes say they have them, but they'll refuse to provide them."

Gregorie believes resorts should have to publish safety plans and safety statistics, so that patrons can compare one ski area with another. That way, the resorts could compete against each other to create the safest possible environment, much as automobile manufacturers do. But in his letter, Berry sees this concept as divisive. In his words, "Our ski areas are united in our industry's commitment to safety, and we will not devalue its importance by treating it as some sort of competitive marketing advantage." 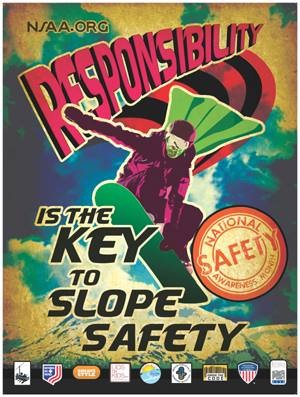 A graphic from the National Ski Areas Association.
Facebook
Given the industry's general disinterest in his ideas, Gregorie tried a different tack a few years ago. He created a foundation affiliate called the California Ski and Snowboard Safety Organization, and worked with state lawmakers on what he describes as "transparency legislation that would have required the ski resorts to have a safety plan, to disclose that safety plan to the public on request, and to report their number of deaths and injuries — which got watered down to deaths only." The legislation passed twice, in 2010 and 2011, only to be vetoed by, respectively, Arnold Schwarzenegger and Jerry Brown, successive California governors from different political parties. When asked their rationale for nixing the bills, Gregorie says simply, "The ski industry is very powerful in California."

As such, Gregorie is currently pinning many of his hopes for change on the judiciary. He points to a case in Oregon "involving a family who had a son who became a paraplegic as a result of an accident at a terrain park. Their case was thrown out because of liability waivers, which also are used in Colorado; these waivers ask people to waive their ability to file any type of lawsuit against the resorts because of the inherent risks. But the Oregon Supreme Court ruled that these liability waivers encourage resorts to be deliberately negligent and sent the case back down to the local courts for trial." The case is ongoing; click to read the Oregon Supreme Court ruling.

There's no equivalent case in Colorado at present — and the NSAA stresses that keeping patrons from harm is its top priority. "We will continue our longstanding efforts to work with ski areas and other charitable organizations that responsibly seek to influence skier and snowboarder education and on-mountain safety," Berry writes.

Meanwhile, Gregorie feels that the SnowSport Safety Foundation is making progress when it comes to "educating the public about the absence of good safety information and the true risks involved in snow sports. And I'm not arguing to eliminate liability protections for resorts. I just feel that those protections ought to be contingent on performance with agreed-upon safety standards."

In Gregorie's view, "skiing was originally a rugged outdoorsman sport, and the law basically put the responsibility for safety on the skier — because the outdoorsman who was going into a risky territory should have responsibility for his own safety. But today, skiing is a recreational sport, and ski areas invite people of all ages and abilities to their resorts to buy tickets. So they have a moral obligation to let people know what the risks are."

1. Warn of and mark the full extent of hazards that approaching skiers and riders may not see so they have ample time to stop or avoid them.

7. Prominently post and locate designated trail names with difficulty ratings on the resort trail map and on the trails so as to enable skiers to make appropriate, informed trail selection decisions.

8. Construct all hazard markings, signs, rope lines, and fences with colors and materials that attract attention, and that easily break away or minimize potential impact injuries.

10. Protect man-made and other obstacles on or near trails to effectively deflect or absorb impacts at and from predictable skier/rider speeds and directions. Isolate or protect lift lines from approaching skiers and riders.

13. Equip all chairlifts with restraint bars. Maintain and operate all lifts, including loading, unloading and staging areas to best practice safety standards for common carriers. Require small children to be accompanied
by a responsible adult.