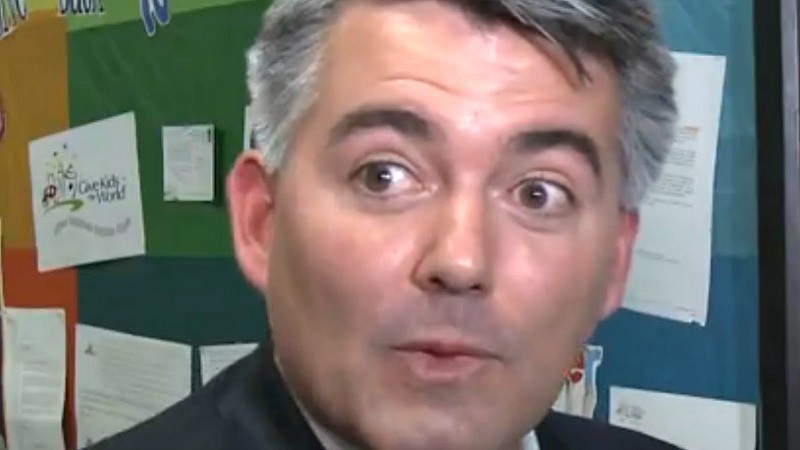 Colorado Politics file photo
"A psychopath? Mixed with human dirt."
North Korea's branding of Cory Gardner as a "psychopath" and a "man mixed in with human dirt" is not just a boon for the Colorado senator, whose reputation as a foreign-policy hawk will no doubt be enhanced by the rogue nation's decision to attack him. It's also among the country's ten best insults of all time, joining a memorable list shared below.

"On May 3, some [expletive] by the name of Cory Gardner, who sits on the U.S. Senate Foreign Relations Committee, perpetrated wicked blasphemy against our supreme dignity during an interview with NBC.... For a psychopath like the [expletive] Gardner, to hurl evil accusations at our highest dignity is a serious problem.... That a man mixed in with human dirt like Gardner, who has lost basic judgment and body hair, could only spell misfortune for the United States."

Last year, the Korean Central News Agency, the official mouthpiece of North Korea's government, called Park, who was forced from office earlier this year, a "tailless, old, insane bitch," a "senile old woman" and a "murderous demon" destined to meet "a sudden and violent death."

In May 2014, a North Korean newspaper declared, "Divine retribution for the juvenile delinquent Obama!" in a piece that called Barry O a "clown," a "dirty fellow" and somebody who "does not even have the basic appearances of a human being."

In 2009, in the wake of an Asian nations conference, the North Korean foreign ministry said of then-Secretary of State Clinton: "We cannot but regard Mrs. Clinton as a funny lady, as she likes to utter such rhetoric, unaware of the elementary etiquette in the international community. Sometimes she looks like a primary schoolgirl and sometimes a pensioner going shopping."

Chang Song-thaek was executed in 2013 after admitting that he'd tried to overthrow his nephew's regime. He was recalled in this statement: "Despicable human scum Jang, who was worse than a dog, perpetrated thrice-cursed acts of treachery in betrayal of such profound trust and warmest paternal love shown by the party and the leader for him."

In 2012, the Korean Central News Agency went after Myung Bak, who preceded Park as South Korea's president, with headlines such as "Let Us Cut Off Windpipes of the Lee Myung Bak-led Swarm of Rats!" and accompanying cartoons. The caption on one of the latter reads: "The dirty hairy body of rat-like Myung-bak is being stabbed with bayonets. One is right in his neck and the heart has already burst open. Blood is flowing out of its filthy bottom hole."

After the Arizona senator referred to Kim Jong-un as a "crazy fat kid," North Korea replied that McCain and Ted Cruz, another U.S. leader with which it had beef, were "like [puppies] knowing no fear of the tiger."

In 2014, when Kerry was Secretary of State, North Korea called him a wolf with a "hideous lantern jaw."

The Bush team was collectively dismissed as "a bunch of tricksters and political imbeciles who are the center of a plot breeding fraud and swindle."

North Korea really, really didn't like the Rogan-Franco movie The Interview, dubbing their cinematic effort "the most undisguised terrorism and a war action to deprive the service personnel and people of the DPRK of their mental mainstay and bring down its social system."