What to Expect From Señor Bear, Opening Imminently Laura Shunk
The ahi tuna tiradito at Señor Bear.
Señor Bear — the Tejon Street Latin American restaurant from Bar Dough crew Max MacKissock, Blake Edmunds and Juan Padro and Katie O’Shea Padro — should open imminently: The restaurant is waiting for one more permit sign-off from the city, and then the crew will take possession of the space and train up the staff, which means that we could see this restaurant open before the end of the month.

No promises, though: Señor Bear needs approval of its grease trap, which was installed by the previous tenant of the space, which was home to Jezebel's and the Squeaky Bean before Padro and his partners took over. Padro says the codes have since changed, and if inspectors require the team to reinstall the equipment, the restaurant could be delayed for a couple of months.

Meanwhile, the team has nailed down the menu and locked in the bar staff and is raring to go. “We’re super-confident,” says owner Juan Padro. “The food is dope. Everyone has been very focused on putting out really good food and drinks — it’s genuinely exciting.”

A play on the Taco Bell gordita on the Señor Bear Hora Loca menu.
Laura Shunk
Señor Bear pulls influence from all over Latin America, from Mexico to Puerto Rico to Peru. Edmunds and MacKissock traveled broadly in the region, and they’ve put together a list that showcases what they’ve learned, applies their signature whimsy, and adheres to their focus on quality. “Max talks about this all the time,” says Padro. “We’re inspired from our travels, but we’re going to apply good technique and use good ingredients. That’s really what it comes down to.”

MacKissock also emphasizes that this menu is really Edmunds’s baby, and it includes flourishes like housemade tortillas, house-fermented hot sauce and even soft-serve ice cream made on site. 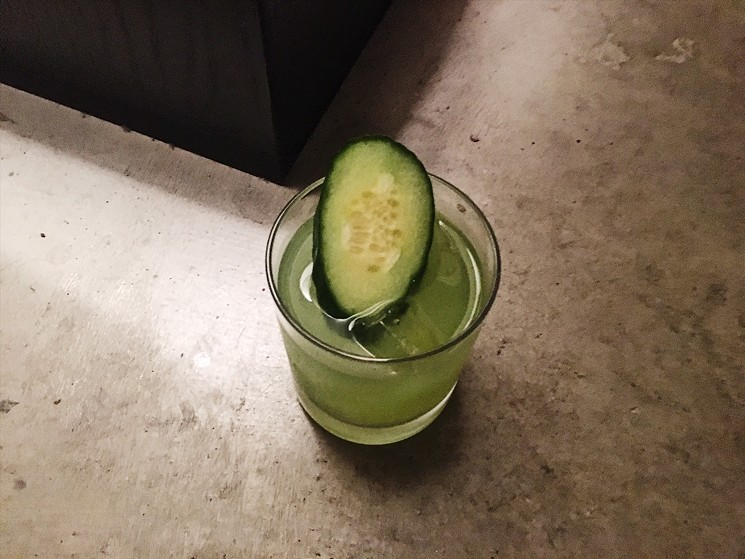 Ancho Verde, white rum, green juice.
Laura Shunk
“This is serious food, although I hesitate to use the word 'serious,' because we’re all about fun," says Padro. “Each day at Señor Bear will kick off with an Hora Loca, modeled after a wild party hour in parts of Latin America standard during wedding celebrations. In practice, it’ll be a bit like a happy hour, but with cheeky snacks and drinks. At a preview in the Segretto space at Bar Dough, the team trotted out the bear bell by way of example, inspired by the Taco Bell gordita.

The chefs say the rest of the menu runs deep in fish, with lots of ceviche that will change seasonally (or daily, depending on the catch). Bites at the preview included an ahi tuna tiradito built with fresno chiles, parsley and a swipe of sweet-tart lemon dressing, and shrimp escabeche hiding beneath a tostada dusted with hoja santa. A vivid green queso fundido was a standout — studded with cilantro-enhanced chorizo plus pepitas — as was a coconut soft-serve dessert, topped with cubes of acai and mango. Edmunds promises a taco section that will allow diners to build their own at the table, though he emphasizes that tacos aren't the focus.

Coconut soft serve with toasted coconut, acai and mango.
Laura Shunk
Señor Bear’s cocktail program is also shaping up to be one of the most formidable in the city: While Bar Dough’s Shawn Williams will also oversee the bar program here, Padro reveals that Williams & Graham’s Nick Touch will be on the opening bar lineup — “I personally have a ton of respect for Nick, and I envision him playing a significant role in the bar program,” says the owner — and joining him is Whitney Allen, also from Williams & Graham; Chelsea Little, who came to Denver from a James-Beard-Award-winning restaurant in Saint Louis; and Chinendum Iwakour from Root Down, “one of the most popular guys in the city,” says Padro. They’ll bring to bear a list centered around pisco, rum, tequila and mezcal. Highlights of that preview included a a pisco sour made with rose and cardamom; a pineapple, tequila and mezcal cocktail floated with red wine and garnished with flaming star anise; and a refreshing blend of tequila, mango and beer.

Pisco, egg white, rose and cardamom.
Laura Shunk
And overseeing the dining room at Señor Bear is Karla Ortiz, who Padro says came from some of Washington, D.C.'s most venerable cocktail bars and who worked at Highland Tap until Bar Dough opened. “She’s incredibly consistent, but she doesn’t give a shit about notoriety,” says Padro. “She cares about shit like you would not believe. She’s never been a GM, but she’s going to be fucking awesome. I can’t even begin to tell you the amount of work and effort she’s put forward.”

Fingers crossed that the team gets the go-ahead this week.