The couple underwent surgeries to become mirror images of each other, turning into "the Pandrogyne," an all-gender-inclusive spiritual entity of their own creation. They adopted gender-neutral pronouns — s/he, h/er, h/is, — and aspired to merge into one person in the most literal way they could.

Unfortunately, death has a way of interrupting the closest human relationships. When Lady Jaye died of cancer, Genesis was left to go through life alone. H/is friend, filmmaker Hazel Hill McCarthy III, reached out and suggested they make a movie together, a documentary about the relationship between performance art and the Vodoun religion, a West African spiritual system, commonly referred to as "voodoo." Thus began Genesis and McCarthy's journey that led to the brilliant yet troubling 2016 documentary Bight of the Twin, which Collective Misnomer will screen Friday, May 12, at the SIE FilmCenter.

Genesis and McCarthy traveled together to Ouidah, Benin, and began production on what was intended to be a straightforward documentary, attempting to normalize Vodoun – something the film utterly fails to do. 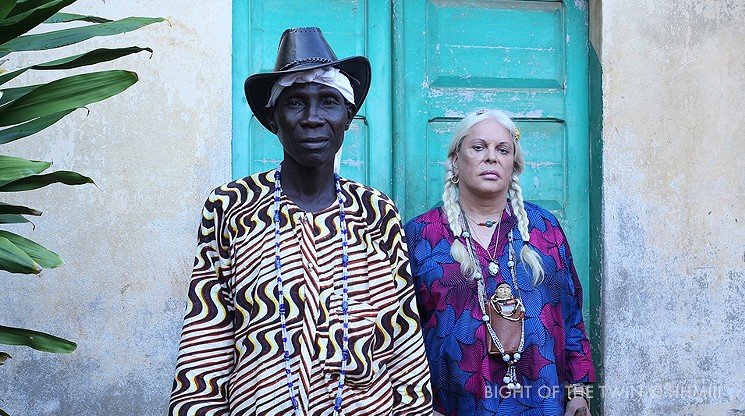 P-Orridge (right) stands next to one of the residents of Ouidah.
Hazel Hill McCarthy III
Throughout the course of production, Genesis became close with the practitioners of Vodoun, and eventually decided to undergo a ritual, the Twin Fetish, in which s/he connects with the spirit of Lady Jaye channeled into a doll. The ritual, which is only coarsely explained, appears to involve spiritual practitioners creating a fetish object, bleeding out chickens over it, drinking blinding amounts of alcohol and entering deep trance states. At times, P-Orridge seems entirely unhinged by the process, indoctrinated out of desperation and mourning, and a victim of perilous curiosity. At other points, s/he appears in control, both present in the ceremony and also a rational observer looking at what s/he's doing with detached delight.

The documentary – which is shot in that handheld cinéma vérité style that lends the movie an aura of authenticity exploited by so many earnest documentary filmmakers – ultimately asserts itself as an act of Vodoun itself. While the movie functions as a documentary, it breaks the very contract we expect from an anthropological film: It sells rational truth-seeking for the surprising embrace of a religious tradition that the movie never fully explains.

Watching Bight of the Twin leaves viewers with more questions than answers yet provokes much-needed conversation about the instability of gender, the colonial gaze, spirituality and performance art. Audiences will surely debate whether this documentary depicts a sincere performance artist's full immersion into another culture and religion (perhaps as fundamentally challenging to achieve as two people becoming one) or a crude act of cultural appropriation.

This sort of movie — at once unsettling, moving, shocking and profound — is what the experimental media organization Collective Misnomer has done such a good job of showcasing in Denver. The screening is particularly noteworthy because it marks the first time the group is partnering with the Sie FilmCenter and bringing DIY experimental media to an established movie theater.

The screening of Bight of the Twin takes place at 10 p.m. tonight, May 12, at the Sie FilmCenter, 2510 East Colfax Avenue. For more information, go to Collective Misnomer's website.