The Post's Brewmaster, Bryan Selders, Is Heading Back to Dogfish Head

The Post Brewing Facebook page
The Post brewmaster Bryan Selders is Delaware-bound.
He came, he saw, he ate some chicken and brewed some GABF-award winning beers, and now he's leaving. Bryan Selders, who became the founding brewmaster at the Post Brewing in Lafayette in 2013 after nine years as the head brewer and reality-TV star at Dogfish Head Brewing, is heading back to Delaware, where he'll take on a new role at that famous brewery's new campus.

"Dogfish offered me a pretty amazing opportunity that I would have regretted not taking," says the personable Selders. "So I talked with my family, and we decided it would make sense."

Selders moved to Colorado in 2013 after leaving Dogfish Head and briefly exploring the world of web design. He was given the keys to The Post — as well as an ownership stake — by the Big Red F restaurant group, which owns the brewery-and-fried-chicken joint along with four Jax Fish Houses, Lola, Zolo, the West End Tavern and several other eateries up and down the Front Range.

Over his four years there, he specialized in creating easy-drinking beers — which are very different than Dogfish's signature "off-centered" brews — like Howdy Beer, a 4.5 percent ABV pilsner; Townie, a mildly hoppy, 6.2 percent strong pale ale; and Achtertuin Seizoen, a farmhouse saison. Howdy and Achtertuin both won medals at the Great American Beer Festival — something Selders says he is very proud of.

"I think we have accomplished some pretty great things in a pretty short amount of time here at the Post," adds Selders, whose last day is May 25 but who will stay on as a partner in the restaurant and as a consultant for a few months. "I'm hopeful that whoever comes in will be able to keep things on the same track by making delicious and drinkable beers that pair really well with food and with good times." 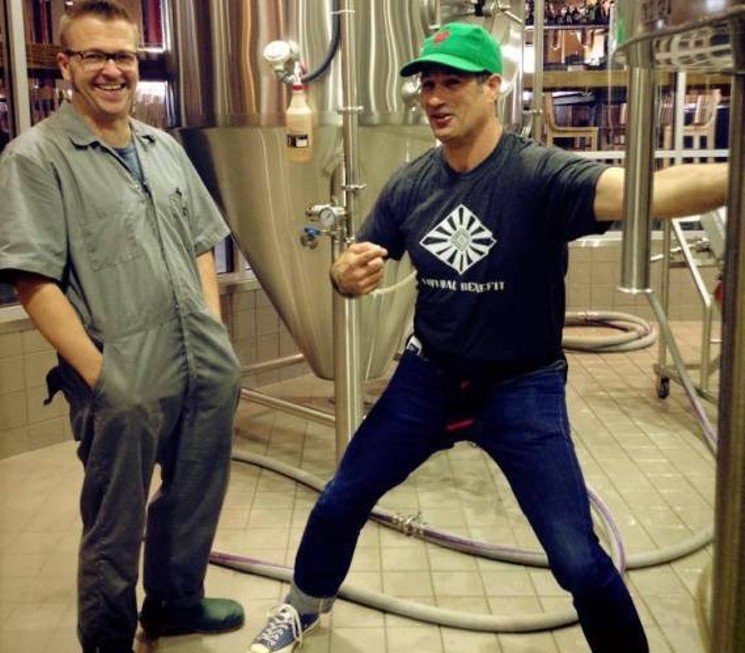 Bryan Selders (left) and Dogfish Head's Sam Calagione collaborated on a beer in Colorado last year.
The Post Brewing
Selders, who has family in both Colorado and the Delaware area, will pack up his Prius in late May and drive to Dogfish's new Rehoboth brewpub campus, where his first brew day will be May 31; his family will join him later. "When it was announced that I was coming back, I got requests to make one from the vault, Johnny Rawton Pils," he says. The beer hasn't been made since 2010, but it will be first in line upon his return.

As the "brewing ambassador for that campus, he will "keep the pipeline of brewpub-exclusive beers full, brew experimental beer with [brewery founder Sam Calagione] and other Dogfish brewers, while also working to represent the brand at Dogfish Head hospitality locations and events," reads a statement from Dogfish Head.

It's a little bittersweet, because I will miss my Post family," Selders says. But "the scope of the work first and foremost is really attractive to me." In addition, the lure of coastal Delaware was calling him back. "There's nothing quite like doing a brew and then heading to the beach."

Selders will also reunite with Calagione, with whom he has kept close over the past four years. The two brewed a collaboration barleywine called Bulky Oxen last year and are now working on a book and web series together. The two brewers also previously starred in Brew Masters on the Discovery Channel and fronted a band called the Pain Relievaz, which was "the world’s one and only beer-geek, tongue-in-cheek hip-hop ensemble."