Denver Post TV via YouTube
Molly Hughes anchoring a segment of Denver Post TV earlier this year.
Shortly after the Denver Post revealed plans to move its newsroom out of Denver to Adams County, the newspaper is ending and rebranding Denver Post TV, an ambitious effort to regularly create television-news-style segments intended to complement and enhance its reporting. The Post has also parted company with Molly Hughes, a former CBS4 anchor hired in 2014 as the public face of the project. But editor Lee Ann Colacioppo stresses that the move shouldn't be interpreted as the Post abandoning the visual side of news.

"I would describe what we have done as changing direction, and we expect to produce more video than ever," Colacioppo notes via e-mail.

We've reached out to Hughes about this development. If and when she gets back to us, we'll update this item.

The original announcement about the launch of Denver Post TV took place in September 2014, mere days after news broke that the Post was officially for sale. Staffers were informed about the effort by way of an e-mail from two executives who are no longer with the newspaper: editor Greg Moore and news director Kevin Dale. Here's the memo:

We are excited to announce the hiring of Molly Hughes as director of Denver Post TV. Video has become a major platform for us, both in reader engagement and revenue. Molly, who for nine years was evening news anchor for CBS4, will use her blend of reporting, on-air and technical skills to help us relaunch DPTV into a major vehicle for content delivery from all departments.

Molly is the winner of the 2005 Emmy for Best News Anchor and the 2005 Emmy for Best Hard News Series. In addition, she was part of the 2003 Emmy for Overall Station Excellence at CBS4. She also co-anchored the newscast that was awarded the 2004 Edward R. Murrow Award for Outstanding Newscast and she anchored the newscasts that won the 2003 Murrow awards for overall excellence, best newscast and best news documentary.

Since 2012, Molly has been an executive coach for Colman and Company, helping people to better connect with audiences.

All of those skills are critical in our efforts to build our video program. We expect Molly will anchor a number of daily news shows. In addition, she will work with Department heads and reporters on breaking news as needed.

We also plan to build weekly shows that include every department in the newsroom and Molly will be a resource to help staffers improve their on-air presence.

Our goal is to double our video production, and we will be tapping several staffers in the newsroom to help turn our reporting expertise into strong video.

Molly will report to Tim Rasmussen as part of our growing video team. She will join the staff in late September — please join us in welcoming her to The Post!

As we noted at the time, the Post had already been experimenting with the production of regular programs. The most prominent among them was The Press Box, a sports-talk show simulcast on Mile High Sports Radio. 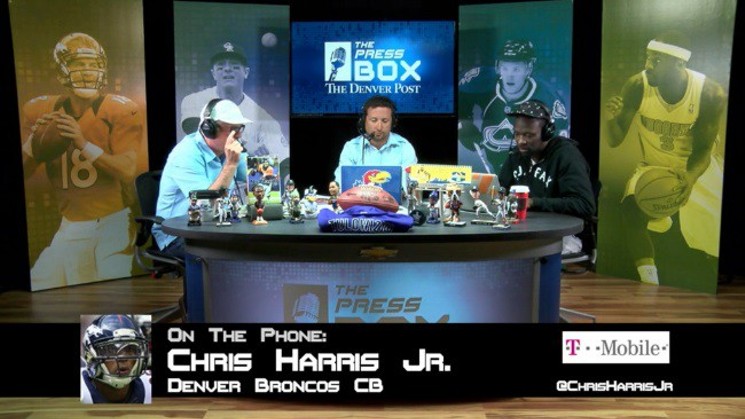 A screen capture from an episode of The Press Box, which predated the launch of Denver Post TV.
File photo
Over the two years-plus that followed, Hughes delivered summaries of many high-profile print stories in a manner familiar to TV-news viewers. Plenty of the clips can be found on the Post's YouTube channel.

But as time passed and budgets tightened, the powers-that-be at the paper determined that the style of the programming wasn't forward-looking enough. And that meant a change in personnel.

"Molly Hughes is no longer with The Denver Post as we move away from depending so heavily on a traditional TV news model and invest in more innovative video storytelling," Colacioppo writes. "We are rebranding DPTV to Denver Post Video, which better reflects all we do in the video arena."

Not that all vestiges of Denver Post TV will be gone. The new approach "still includes some TV style work, most notably Alexis Perry's Sports Minute and The Cannabist Show," Colacioppo allows. "But it also includes text videos, 360 and VR and longer, documentary style video."

But not necessarily an anchor à la Denver Post TV. Still, Hughes could have one last valedictory. She's nominated for a 2017 Heartland Regional Emmy for a Denver Post TV interview with Sue Klebold, mother of Columbine killer Dylan Klebold. The winners will be announced at a ceremony on July 15, around two months after Hughes's employment at the Post ended.