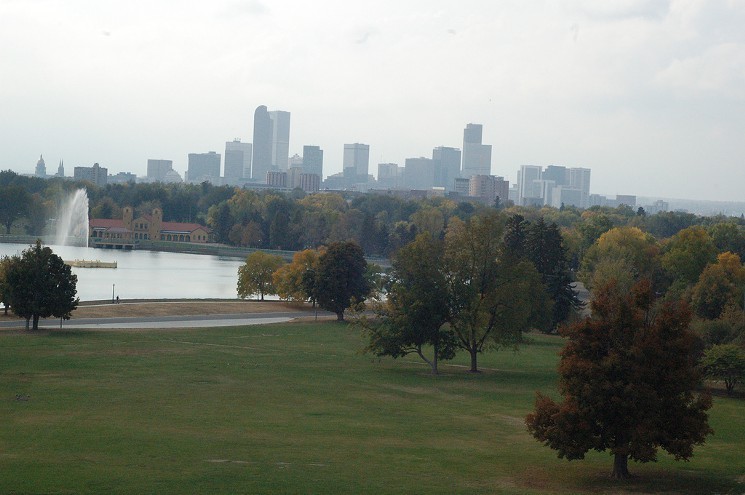 Dave Herholz at Flickr
Should City Park, as well as other Denver parks, be zoned?
Longtime neighborhood leader and civic activist Tom Morris is concerned about the status of Denver's parks, and he recently sent a letter to the mayor — a missive that has not yet been acknowledged, he says. Here's the letter, which we're sharing as an op ed:

Yet, the city continues to attempt to bypass the public.... With these many failures, I would think a responsible government would be looking for a way to improve its performance.

No one in this city has more experience with these failures of government than me. As the result of spending many years in park disputes, I am firmly convinced that Denver can do better. Not counting being excused from Joe Ciancio’s office behind Mile High Stadium for complaining about the trash in City Park in 1979, I have been in and around these disputes since 1982.

These disputes have earned front-page headline squabbles and quiet approvals. They have been jovial and angry. But the disputes continue, with no end in sight. They can be whatever any mayor chooses. The instability of the process is exercised with every change of administrations.

At present there is no legally described process for dealing with these disputes beyond the personal opinions of the executive director of the Department of Parks and Recreation. The asymmetry of these disputes excludes the people most affected by the issue. Because the ED is appointed by the mayor, each confrontation is based on a citywide constituency vs. the locals. The locals must make enough noise to reverse the disinterest of citizens across the city in these mostly local disputes.

In traditional American government, we depend on all three branches of government to make decisions. In park disputes, Denver City Council is excluded from influence on the issue of how are parks are used. The OS-A zoning designation assigns the decision to the ED and describes “parks” as everything in, on or around, parks. This means that the ED can inform or involve the public at their personal discretion.

I am asking the City and County to change this process to include those requirements contained in a zoning change anywhere else in the city, including posting the site, informing neighbors in a timely way and conducting two public hearings, with the final decision by city council. The city charter clearly assigns responsibility for land use in Denver to city council. It is a wise assignment, since zoning is usually a local issue. If the issue is a citywide issue, it can be judged by council in regard to its importance to the whole city. The common courtesy of courtesy zoning allows a local representative to vote her or his constituency’s opinions and face them at each election for approval.

I fully understand that zoning is not without disputes. But those disputes are resolved under a tried-and-true system that protects every other scrap of land in this city with full transparency and true participation by all branches of government, including the people.

Have an opinion on a local issue that you'd like to share with our readers? E-mail [email protected]