Anne Leighton
Jethro Tull by Ian Anderson will play Red Rocks this week with the Colorado Symphony.
After finishing classes at Bear Creek High School on Thursday, June 10, 1971, Steve Baum, who had just turned sixteen, and a few of his high school buddies drove straight to Red Rocks Amphitheatre. They had scored tickets to a sold-out Jethro Tull concert.

The teens arrived at the venue around 4 p.m. and settled into the fifteenth row, center stage. They tossed a Frisbee back and forth and drank wine from a bota bag. It was getting dark by the time James Taylor’s kid brother, Livingston, started to play his gentle acoustic set.

“They had a folkie opening for the hottest rock band at that time — other than Led Zeppelin or the Who,” Baum says. Three months before the concert, Jethro Tull had released the landmark album Aqualung. “This was a major deal. Aqualung was huge in our part of the world,” he adds, and folk music wasn’t what the audience craved.

The crowd started booing Taylor off stage, Baum recalls. Around that same time, he and his friends saw flashing lights and smoke. “None of us had a radio or anything with us at that time. We didn’t know what was going on.”
A riot had erupted outside the amphitheater.

Inside the venue, Baum says, there was a commotion, and he and his friends could tell it was escalating.

“The first wave of tear gas kind of floated over us,” Baum remembers. “We were choking. Our eyes were watering. We could barely breathe, that type of thing. And then it kind of floated away and you slowly recover. A few moments later, another cloud of tear gas comes over in front of us, and the exact same thing happens.”
Helicopters flew above, shining spotlights on the ground. Baum and his friends had no idea that a police car outside had been torched.

“We had no clue,” he says. “We also didn’t know that the local Denver media had started broadcasting that there were troubles and probably a riot there at Red Rocks — the early splurges from the evening news. And, of course, all of our parents are watching TV, and they start hearing about riots at Red Rocks, people hurt, police hurt and a police car set on fire. They have no way of reaching us. We’re not only pre-cell phone; we’re pre-fax machine at that point.”

During the commotion outside, the Jethro Tull bandmembers were trying to enter the venue.

“We were aware as we were heading up to the show that there were some problems with crowd security,” says Jethro Tull frontman Ian Anderson, who will be returning with his band to play a May 26 concert with the Colorado Symphony. “We were told we couldn’t go up. There were police roadblocks. They said, ‘You can’t go.’ So it was a little worrying that there were big problems.

“Since we were in a couple of unmarked station wagons, we attempted it again, hiding in the back of the vehicle so they didn’t really know that it was the band,” Anderson continues. “And we got through and went up there. Again, we were told the show was canceled. Then there was tear gas everywhere, and it was very unpleasant, because I think there had been, I’m told, about 1,000 people who didn’t have tickets and were trying to get in and making a bit of a fuss. And the police reacted by using tear gas. Of course, it gassed not only the people outside, but the people inside the venue as well.”

The band eventually made it into the amphitheater, and Anderson went on stage and told the audience they would play the show if people kept calm and didn’t overreact. Baum recalls Anderson playing a few songs on an acoustic guitar and calming the crowd before the rest of the band came out. Once fans realized the concert would go on, things settled down.

“We went on to do the show, but the tear gas kept coming, and so they were passing small children down through the audience to be revived at the back of the stage,” Anderson says.

Baum says Jethro Tull settled in and played a stellar show that included songs from Aqualung and cuts from 1969’s Stand Up and 1970’s Benefit. Baum remembers the crowd turning silent during “Locomotive Breath.”

“They listened,” he says. “The band did a great job of playing it. People got to the point where they were standing on their feet and cheering the band and very nearly forgot about what was going on around them.” 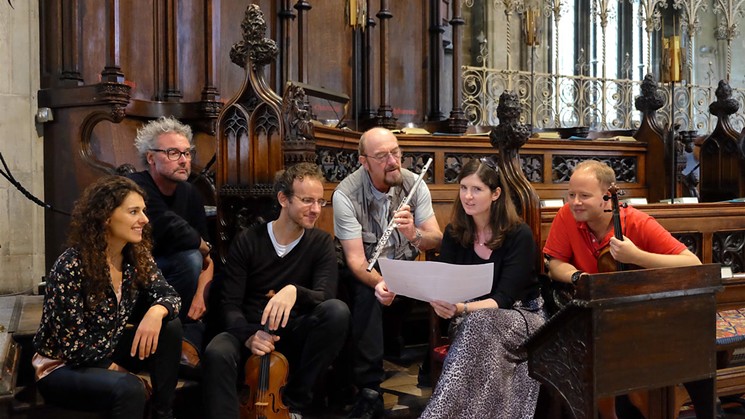 Anderson often collaborates with classically trained musicians.
Anne Leighton
Anderson says the audience members put up with a difficult situation, and he doesn’t recall any further problems once the tear gas cleared.

“It was unpleasant,” says Anderson. “If you’re a singer and a flute player and you’re trying to work not only with mile-high altitude and oxygen, but also tear gas — it was a little testing for the lungs of even a 25-year-old, which I was at the time.”

The Denver Post reported the day after the concert that “would-be gate crashers hurled rocks, and police responded with tear gas in a series of disturbances.… Twenty-eight persons, including four Denver policemen, were treated at Denver area hospitals for injuries received in the disturbances. Dozens more, including police officers, concertgoers and would-be gate crashers, were treated at the scene.”

The Post also reported that twenty people were arrested, mostly for drunkenness, weapons violations or narcotic charges, while one car was destroyed by fire and several other vehicles were damaged.

“If we hadn’t gone on stage, they would have had 10,000 people rioting,” Anderson says. Even so, Denver police were not happy with the band.

“On the way back down, they were trying to nail us,” he says. “Again, we had to hide under a blanket in the back of a station wagon. Our drummer had just joined the band prior to that U.S. tour — I think it was one of the very first nights of the tour. I said, ‘Keep still, keep still.’”

And then, he says, just as the police were shining flashlights in the car, looking for them, the drummer turned to him and asked, “Is it going to be like this every night?”