Adam Larkey
Luke Bergman came to Colorado with one condition: that he could one day open his own restaurant.
Luke Bergman met Lon Symensma fifteen years ago, when both men were fresh out of culinary school and serving a brief stint at the same Connecticut country club. While they orbited each other a bit in New York City, their professional paths never really intersected again until two and a half years ago, when Bergman came out to Colorado to visit his old friend. Bergman was convinced by Symensma to sign on as sous-chef at ChoLon on the condition that Bergman would eventually oversee his own space. Now that promise has been fulfilled: The pair opened Concourse Restaurant Moderne, with Bergman helming the burners, at Eastbridge Town Center in Stapleton last month.

We recently chatted with Bergman about his macrobiotic-vegan upbringing, how some of New York City’s most prolific chefs coached him to victory in a prestigious global competition, and why he was ready to trade the Big Apple and South Florida for Colorado living.

Luke Bergman: I moved to Fort Lauderdale when I was a year and a half; I was the oldest of two other brothers. My mom studied Japanese and Chinese cuisine and raised us vegan and macrobiotic — I ate a lot of beans, rice and whole grains. My youngest brother has Down syndrome, so my mom was working the whole time. She hired a live-in Jamaican housekeeper who lived with us through the school year, and she was always making curried goat and Jamaican fried fish with pickles. When I was seven, my mom was like, you don’t need to do this macro-vegan thing — you’re at school, kids are influencing you, you’re free to do what you want. So I was exposed at a young age to multiple cuisines and foods I don’t think a lot of kids experience. I went to middle school and high school with a girl whose father owned a local Italian restaurant. She said, “Why don’t you come help and learn how to do rustic Italian dishes?” I really fell in love with it. 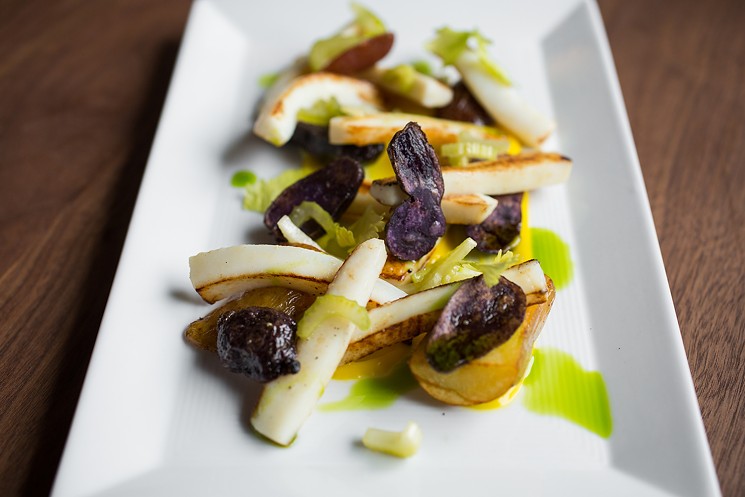 Humboldt calamari with lemon emulsion, potatoes and pickled celery hearts at Concourse.
Danielle Lirette
As I got closer to graduating from high school, I thought, I’ve lived eighteen years in South Florida; let’s go to an institution and get training. I thought upstate New York would be the best because I could go down to the city on weekends to work, so I went to the Culinary Institute of America in Hyde Park. While I was in school, I worked at La Crémaillère. It was this small little farmhouse in Bedford, New York, on the border of Connecticut, near Martha Stewart’s house. The food was like for kings and queens. I’d never seen anything like it; I was dumbfounded. I got my first taste of French cuisine. It was cool to see the classical sauces being made. I just fell in love with it; I offered my time there every weekend.

I did [an internship in D.C.] for about four months, then went back to school. Right around that time, 9/11 happened, and everyone was slow. America didn’t know what to do. This was right upon graduation. Luckily, chef and instructor Xavier Laroux asked me to be his fellow, his teacher’s assistant. It was great: I paid off my student loans and was working with French again. Halfway through, I needed another summer job, so I got put in touch with another chef at a country club in Greenwich, Connecticut. When I showed up, I was told I’d meet Lon Symensma. He was doing the same thing — trying to pay off student loans and, like me, was off for the summer. He called me up four months later and said, “I’m going to Asia for three months — Jean-Georges [Vongerichten] is sending me — do you want to sublet my apartment in Manhattan?” I thought, why not? I started right away at Aureole and was there for one year, then started seeing all the ads for Danny Meyer taking over the Modern at the Museum of Modern Art. I thought, I have to go there. I knew about Gramercy Tavern and the Union Square Cafe, and I knew I would love to be part of this sort of atmosphere. I went on three interviews and landed the job.

Curls of wagyu beef from 7X Ranch with potato chips and smoked-egg mayonnaise.
Danielle Lirette
Working at the Modern rounded me into a culinarian who really thinks about shapes, colors and the composition of a plate, and using seasoning in a way that makes ingredients explode with flavor. After about two and a half years, I worked my way up to the executive sous-chef position. I got to go to Europe a bunch — Germany, Switzerland, I took a vacation in Barcelona. Pastry chef Marc Aumont’s mother lived in Valencia. He took me to his house, and I learned about Catalan cuisine, and that was just so cool. Then Danny Meyer sponsored me for Bocuse d’Or [a prestigious gastronomic competition], and I came in second in America. Second place gets to represent the U.S. at the Trophée Passion in Paris. I’ve never worked with a group of people that were as intense as the guys at the Modern — they constantly pushed me to think, to try new things, to make mistakes.

Gabriel Kreuther and Sandro Romano were amazing influences on my career. Getting ready for that competition to go to Paris, I would come in after working six days straight. We were closed Sunday, so I had the whole kitchen to myself. But they’d come in during the fifth hour, and I’d present to them and their friends, like Gavin Kaysen and Daniel Boulud. They’d critique it, and then I’d start to clean up the kitchen, and Gabriel would be like, “Where are you going?” And I’d say, “I’m cleaning up — I have to work tomorrow.” And he’d say, “We have to do it again right now. I’ll be with you.” He was a coach. Without him, I don’t think I’d be there. Marc really helped me on the pastry side. They took me on as their kid. And I won. I’m the only American to win it. Duroc pork loin over Venetian black rice with fresh fava beans.
Danielle Lirette
After that, I got back to the Modern, where I’d been for seven years at that point, and asked, “Is there a next position for me?” There was no movement. So Tom Colicchio hired me as chef de cuisine at Colicchio and Sons, and I was there for two years. After that, I’d been in Manhattan for eleven years, and it was like, okay, that’s enough. I wanted to move back to Florida. I’d met this guy, Giovanni Rocchio, when he was trailing at the Modern in 2005. He’d worked for Danny Meyer at Union Square and owned a restaurant called Valentino in Fort Lauderdale. We kept in touch, and he eventually asked me to become his chef at Valentino. Two and a half years ago, I got in touch with Lon to see if I could come visit. He was doing so great at ChoLon. I had just had a baby girl. In South Florida, people are showy, and they care about cars and clothes and fake boobs. I don’t want to be around that, and I don’t want my kids to be around that. And it’s so hot in the summertime that no one wants to live there. Being a chef in South Florida is very difficult for four or five months of the year because it’s so dead. So my wife and I were already thinking about moving on. My mom’s from Boise, so we got to come out here and snowboard and ski, and I always thought it was a really cool place to raise kids. You can go skiing in the winter, hiking in the summer, fishing and tubing. There are so many fun things to do.

As I was boarding the flight home, Lon called and said, “My sous-chef just gave his notice. Why don’t you join the team?” I said, “Yes, but I want to do something in the future where I can do my own menu and have some ownership.” The opportunity here was incredible. I’d only worked at one Asian restaurant, and Lon knows that cuisine like the back of his hand. We got to do a lot of cool dishes at ChoLon — it was a win-win for both of us. He got to see a style he was really passionate about and see how I integrated it into Southeast Asian in a playful way. For instance, we collaborated on this Colorado lamb rack biryani. We took julienned Yukon Gold potatoes and blanched them in a turmeric stock until they were fluorescent yellow. We’d sous-vide Greek yogurt for two days until we got this dulce de leche — but for yogurt, so it still had a lot of tang. It was a fun take on biryani. Concourse's take on Rocky Road, with coconut and pistachio meringue, chocolate sorbet and caramel.
Danielle Lirette
Eventually, we pitched Concourse to Larimer Associates, and they showed us [the Eastgate address] and asked, “Could you see your cuisine and concept here?” I said, “Yeah, I think so.” My wife and I moved across the street into a townhouse — now we have two girls — and I don’t have to commute. The vision is to serve some really cool cuisine at a level that doesn’t come off as fancy: We want to be available to families; we want the parents to come and enjoy themselves. The restaurant has a homey feel, but the food has a little bit of a luxury based on my experiences in Europe, New York and my upbringing. We’re taking dishes that most people understand and doing them differently. Like the beet salad with arugula sorbet: I love beets. I think they’re great roasted. We roast ours, and then take four pounds of arugula and make a fluorescent green sorbet out of it and chèvre. When I was in Europe, I saw a lot of European chefs doing savory sorbets. I had a blue-cheese gelato with raw celery and thought, wow this is so cool. So I put my mind together, and was like, this will work. I like the composition and colors. I like when the plates come out and pop.