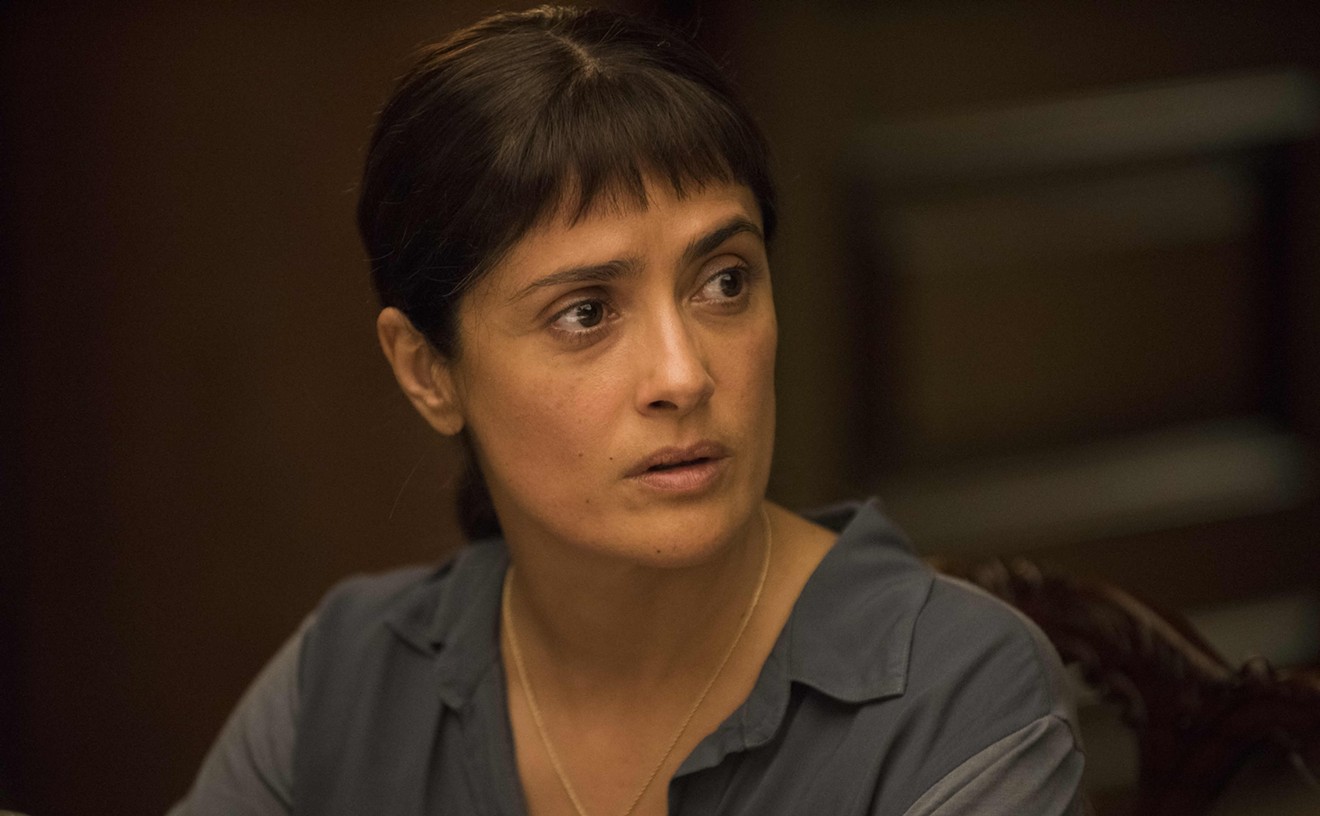 Lacey Terrell/Roadside Attractions
Hayek: “I said, ‘Will I be the cook?’”
It was two weeks before Salma Hayek’s 49th birthday when Mike White told her he was finally going to write that script about the dinner party, the one he’d promised her almost a year earlier. The screenplay would be loosely inspired by a real-life dinner the two had attended, but Hayek knew nothing else about the story, except that she would be the lead.

“I said, ‘Will I be the cook?’” Hayek tells me, straight-faced. “Because you don’t know. That happens.”

Then, on her birthday, the script showed up in her email inbox with a note: “Here’s your gift.” It’d taken White only two weeks to write what is now director Miguel Arteta’s tense and uncomfortably funny ensemble piece, Beatriz at Dinner.

“A lot of people who have seen the movie say, ‘I barely recognize you,’” Hayek tells me. She plays a working-class woman in khakis. “But it’s the character in so many ways that is the closest to who I really am. After reading the script, I realized that at the dinner we were at, he [White] picked my brain, my soul. I said, ‘This is so genius. With my luck, it’ll never get made.’”

It did. A year later, Hayek celebrated her 50th on the set.

Beatriz is in many ways a continuation of the ideas White plumbed on HBO’s Enlightened, only with a more somber tone. Beatriz (Hayek) is an over-empathetic healer from a poor area of Mexico. She believes that positivity can change the world, but her faith is shaken when she meets millionaire real-estate developer Doug Strutt (John Lithgow) at a fated dinner party.

Lithgow likens the tone to something out of Luis Buñuel’s catalog: “a slow-moving train wreck.” The first scene Lithgow shot was one in which Beatriz — not knowing anyone at this party and invited only because her car broke down after she gave the hostess a massage — hovers near Doug, and he mistakes her for a hired waiter. He asks her to fetch another bourbon and then laughs right in Beatriz’s face. Lithgow had to find a way to play what he calls “blithe class prejudice” earnestly.

“No villain thinks of himself as a villain, and that’s the approach I always take,” Lithgow says. “He considers himself a good guy, and he defends himself quite articulately. I think he actually sleeps very well. His convictions, he knows they’re real.”

That initial scene begins a long, drunken night of verbal sparring, which Doug views as good-natured debate and Beatriz sees as an attack on the order of the universe. Not realizing that the other guests’ polite questions are meant as rhetorical, Beatriz hijacks conversations to go deep into philosophy and speak frankly about the poverty she experienced as a child.

“She’s not attuned to the same level of small talk and banter that people at the dinner party engage with,” Arteta tells me. He seems to savor any opportunity to talk about the raw-nerve Beatriz. “She’s just going to the heart of the matter, even if she comes across as rude. I’m pretty prone to heavy-handed conversations at the wrong times, too. I’ve brought down the mood of the room at parties before.”

This dynamic of the film is painfully relatable. Lithgow mentions the social hierarchies that develop in any group of people, with the most brazen person holding the floor and becoming “number one.” In this gathering, that’s Doug. He’s confident and self-assured and believes wholeheartedly in everything he says.

Lithgow: “No villain thinks of himself as a villain."
Lacey Terrell/Roadside Attractions
“When Doug talks about the poetry of hunting, you almost get a little disarmed,” Arteta says, referring to a scene in which Doug shows off photos of his big-game trophies — until Beatriz takes his phone and smashes it. “The way he tells Beatriz that everything is dying and asks, ‘Does that have to be that sad?’ — my editor said, ‘Every time I hear him, I ask why I’m bothering to recycle.’”

It’s easy to be charmed by such confidence, even if you know everything the top dog is saying is against your ethics. Watching Doug hold court with companions who’d rather not think about the doom and gloom that Beatriz thrusts upon them — the basic truths about how the rest of the world lives — reveals a lot about American socioeconomic and political destinies. Doug can’t be sad for everyone else; he offers distraction and excitement and “wins.”

“Anytime a culture is in economic stress, ugly things start happening. Here you have people who are really benefitting from income equality put together with people who’ve suffered,” Lithgow says. “We have to dramatize that and tell that story, because it’s what’s happening right now. You don’t see these people interact in stories and plays. I can’t even think of another example.”

People will call Beatriz timely, but the film instead seems timeless — the United States didn’t just suddenly arrive at this social order. It reminds us that even good people can get swept up in a moment.

“To my shame,” Lithgow says with a sigh, “I would probably have a pleasant conversation with Doug at a dinner party. That’s the other irony.”

Meanwhile, as they eat, Beatriz is like your Facebook friend who incessantly posts every heavy article on global warming and the effects of late-stage capitalism on developing countries. Hayek sees her as living in the past, of being almost addicted to the nostalgia of a simpler time in Mexico before Americans and Europeans ravaged the land for fancy hotels.

“If you try to go home to where you were a little girl, it’s not the same,” Hayek says. “I love this about my character, that urge to go back to innocence. There’s a little bit of that in all of us.”

The anxiety of longing for something that doesn’t exist drives Beatriz to act out — to break Doug from his casually callus paradigm. Bit by bit, Beatriz gets under his skin. In one scene, Beatriz — who’s already been pretty much ousted from the party for breaking Doug’s phone — rejoins the group to play for them a simplistic but haunting folk song on an acoustic guitar. Hayek learned to play the song and now translates the lyrics to English for me. They roughly mean, Don’t get rid of the simple things, because love is simple and the simple things can be devoured by time. In the scene, as Doug listens to the music, he smiles and nods, giving himself over to Beatriz’s call. Lithgow, Arteta and Hayek see the moment as a chance, in the clashing of cultures, to find some common ground.

“Sometimes when you see two characters so different, it’s because one is going to do a makeover of the other. One has to win, has to beat the other one. But this is just one vision of America, in one little dinner, between two characters,” Hayek says. “It doesn’t completely resolve it, but I think it can start the dialogue.”