Facebook/Nathan Davis Hunt
The first city-endorsed tiny-homes project, Beloved Community Village at 38th and Walnut streets in RiNo, just received a big financial boost that might help push it to the construction finish line. The Barton Institute for Philanthropy and Social Enterprise, an independent program based at the University of Denver and named for the late Peter Barton, gave the settlement a grant of $20,000.

Beloved Village Community is the work of the Colorado Village Collaborative, a cooperative effort of members of the homeless community and nine organizations ranging from Bayaud Enterprises to the Urban Land Conservancy and the Interfaith Alliance of Colorado. After an earlier, unofficial tiny-homes settlement in RiNo was raided and dismantled by police in the middle of the night, Beloved Community Village applied for a temporary zoning permit from the City of Denver. After receiving approval, construction began on eleven homes that could house up to 22 people; before this latest grant, the project had raised close to $60,000 through a GoFundMe campaign. 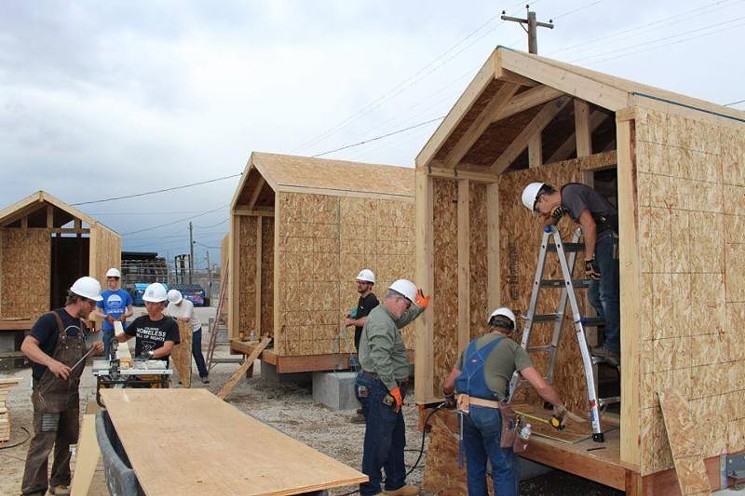 Work continues on Beloved Community Village.
Interfaith Alliance of Colorado
"The Barton Institute looks for projects where different sectors come together for communities with need," says Rebecca Arno, director of the Barton Institute. "We believe real change doesn't happen unless the public and private sectors are working together."

DU's connection with Beloved Community Village extends beyond the Barton Institute; the School of Construction Management and the Graduate School of Social Work are also involved. "The Barton Institute's contribution is expanding on other work DU has done for this project," Arno notes.

While Barton Institute officials appreciated the fact that the city and a cross-section of private organizations and nonprofits of varying backgrounds and focuses were involved in the project, Arno says they were particularly excited by the Beloved Community Village's commitment to involving members of the homeless community. The settlement will be self-governed by people living there, and future residents have played a direct role in construction of the homes and the drafting of a governing code and living policies. "We have a strong belief that the people most involved in an issue should be involved in solving it," she adds.

Along with the $20,000 grant, the Barton Institute has pledged another $20,000 contribution that will be used for matching grants. If other organizations step up and the challenge is met, Beloved Community Village will have reached the funding goal for the first phase of the project.

And there's definitely more to come. "Do [we] have bigger plans?" asks the project's GoFundMe site. "You better believe it. Our goal is to have 3 villages up-and-running for the winter of 2017-2018."