Facebook/Playstation via YouTube
One of these things is not like the other.
Apparently inspired by Spider-Man: Homecoming, which is scheduled to swing into theaters nationwide on July 7, Chad Douthit of Colorado Springs busted out his best Spidey impression shortly before being busted himself on allegations that included throwing a TV antenna at a police car. And it didn't go well.

Schmuck of the Week honorees, meet the latest member of the club.

Douthit's derring-do didn't exactly take place during prime time. At approximately 3:41 a.m. on June 6, according to the Colorado Springs Police Department, officers were dispatched to a residence on the 500 block of South Nevada Avenue on a reported assault.

Upon their arrival, the cops spotted the suspect — Douthit — on the roof of a nearby building. Not only did he refuse orders to climb down, but he allegedly hurled a nearby antenna onto the squad car below, breaking two windows and the cruiser's light bar in the process.

Next, Douthit attempted his most challenging stunt. The CSPD maintains that he "maneuvered to a position in which he was clinging to the roof by his hands with his feet dangling about fifteen to twenty feet above the ground."

At that point, costume-clad Peter Parker would have flipped, jumped, rappelled or swung on a web to a new location. But not Douthit. The cops say he pretty much just dangled until the officers were able to grab him, thereby "preventing a fall that would certainly result in SBI."

Upon being taken into custody, Douthit was charged with felony menacing in association with the initial report, as well as felony criminal mischief for the antenna-chucking episode — but there were no accusations of resembling a superhero.

He does take a mighty amusing mug shot, though. 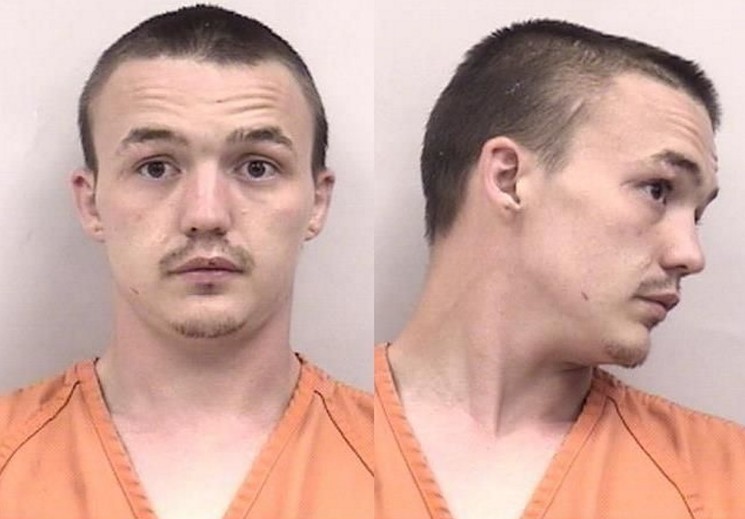 Chad Douthit strikes two poses.
Colorado Springs Police Department
Guess he was ready for his close-up after all.