Metallica Brought a Soundtrack for Totalitarian Violence to Denver. Now What? 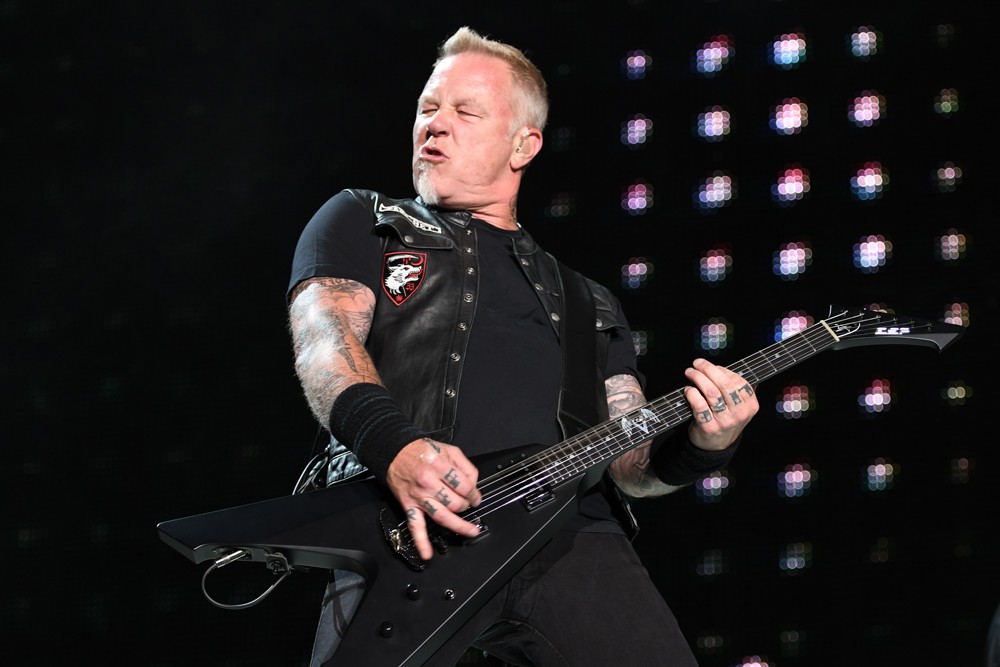 At Sports Authority Field, or Mile High Stadium, or whatever it’s called these days, tens of thousands gathered on Wednesday, June 7, at a sold-out show to watch the heavy-metal giants in Metallica pound the crowd with their signature aggression. A few dozen concert-goers moshed as James Hetfield, Lars Ulrich, Kirk Hammett and Robert Trujillo joyfully blasted fans with sound, fire and violent imagery.

In the right light, the crowd looked like enthusiastic pigs in an over-packed feedlot. We moved to the same beats. We cheered at the same time. Our rage was subsumed by the enormity of Metallica’s spectacle — not to mention Hammett's hair-metal sex appeal. It was compelling. 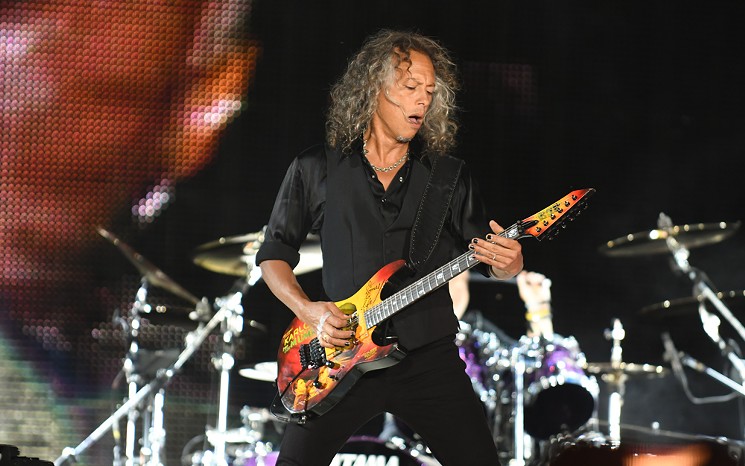 Kirk Hammett shreds.
Miles Chrisinger
Ginormous screens — which were the only thing that kept the artists from looking like irrelevant specks to most of the fans — broadcast images of the musicians, who looked so big that at some point I started wondering if Hetfield’s nose was taller than me.

In a stadium so vast, the whole thing felt like a rally concocted by Leni Riefenstahl in Triumph of the Will. Being there helped me imagine how thousands gathered after Hitler came to power, wowed by a daddy figure who offered up nothing but charisma, hate and brutality.

Look, it was just another stadium concert, right? That’s just how they work.

But Metallica is no Justin Bieber. The band’s vision of the world is introspective and couched in mass violence — the sort of horror perpetrated by big bombs, big armies and big nations. It’s the music of the trauma of war.

It’s wholly American, for better or for worse, in its power and in its rage.

The band’s shock-and-awe style comes off as ideologically muscular, the perfect soundtrack for far-right Republican leadership. Coincidentally, the hyper-manly band last showed up in Denver nine years ago, toward the end of W.’s warmongering presidency, and now, this year, early on in Trump’s.

Does the band actually embrace boots-on-the-ground, blow-’em-up militarism, or is its music merely a response to all that noise? Maybe it doesn’t matter too much what the musicians believe they’re doing. (Think Bruce Springsteen’s "Born in the U.S.A." and how many nationalists hawk it as an ode to Americanism.) It’s always the art itself that matters.

Metallica's music is rooted in the ’80s: the era of GOP austerity and Cold War swagger and the Iran-Contra hearings. With Trump and Russia and political-scandal galore, not to mention an unprecedented political fury stabbing and punching its way across the United States between people of opposing views, Metallica’s brand of rock is the perfect steam valve for this moment.

Perhaps the outfit's stadium show provided an alternative to violent political machination. Still, when the band broke out "Master of Puppets," tens of thousands of us belted "obey your master." It was pretty creepy.


There is something ethically ambivalent about Metallica that raises a profound question: Does the band embrace or repudiate state violence? Is the music a deeply rebellious act or just another injection of speed into the arm of a violent system?

Metallica forces us to ask those questions, to feel the violence. But it’s not up to an artist to decide what his or her music produces. It’s up to us.